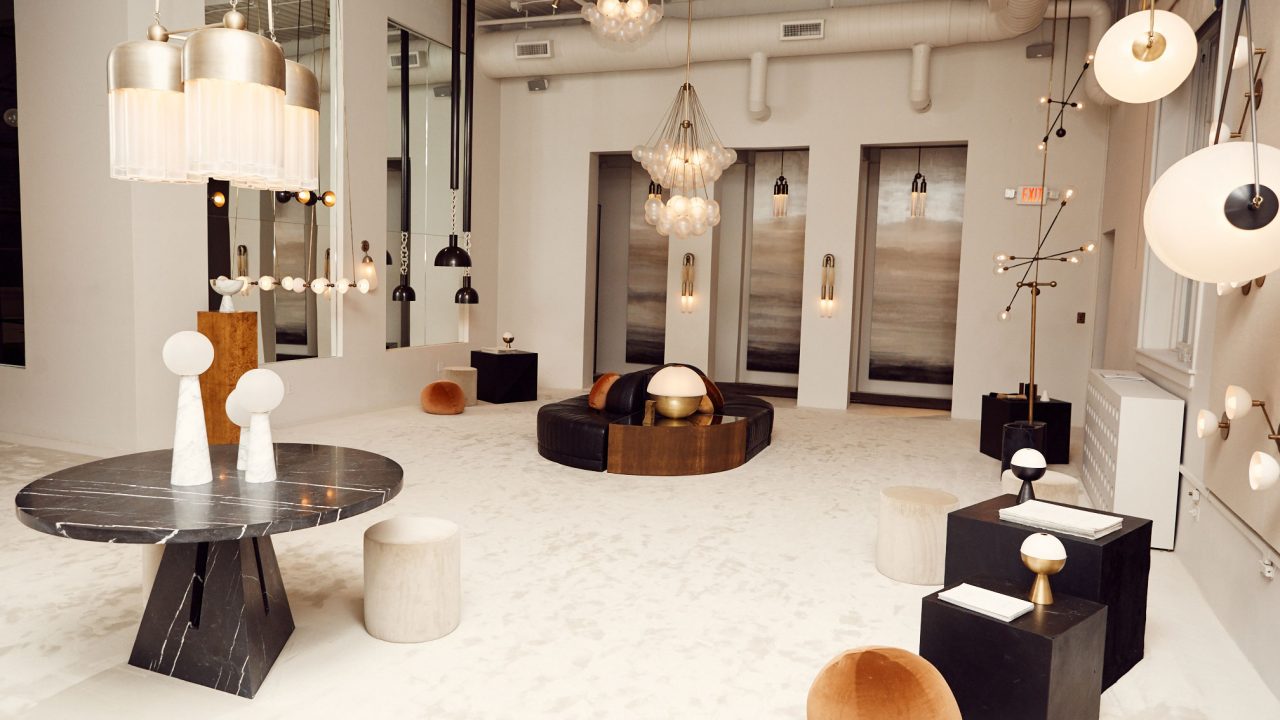 Inside the Most Stunning Design Studio We’ve Ever Seen

Jeremy Anderson and Gabriel Hendifar are on their way to becoming interior icons.

About a year ago, we stumbled upon (and stalked) Apparatus Studio through a series of fortunate events on Instagram. It was love at first light—exhibit A: their cluster cloud chandeliers, which have already become a sort of cult classic. But this comes as no surprise considering Jeremy Anderson and Gabriel Hendifar, the effortlessly chic design duo behind it all, are just as obsession-worthy as their creations. They are style goals, decor goals, relationship goals...EVERYTHING goals.

As Apparatus expands into furniture and sculptural objects, their aesthetic approach remains the same: playing off the emotional response people have to decor and space. The twosome consider the whole picture, rather than just key elements. Everything they touch turns to gold…or brass, copper, leather, horsehair, marble, cast crystal, and beyond. They playfully experiment with imperfect organic materials, which helps distinguish them from other emerging interior designers. When we got an invitation to visit their studio/showroom/office, we immediately packed a bag and were ready to move in. If you ever wondered what it feels like to go on a midday trip to heaven and back, we welcome you to take a closer look at Apparatus Studio. 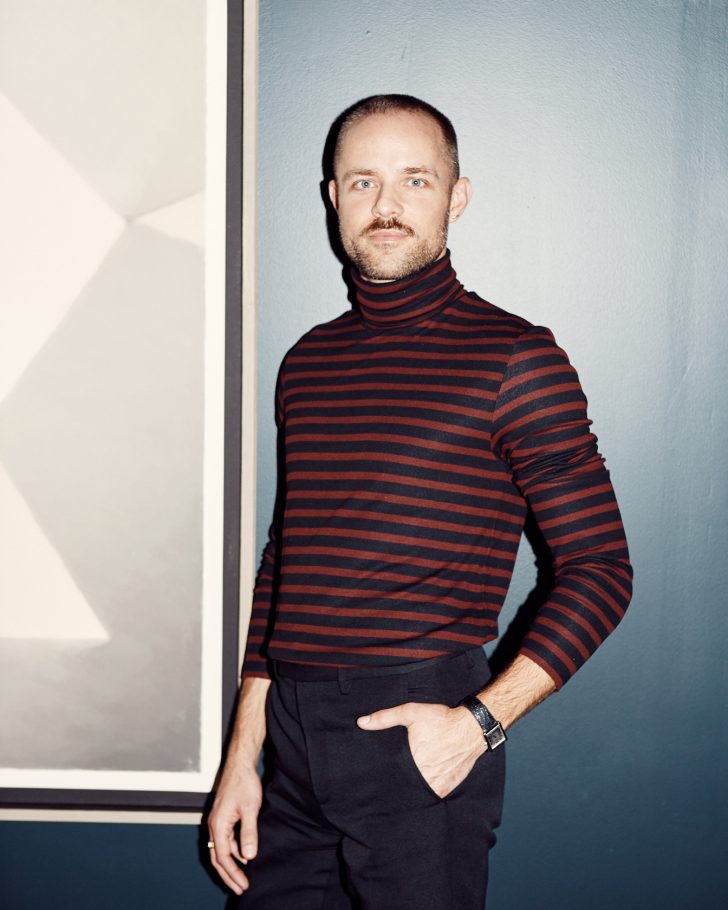 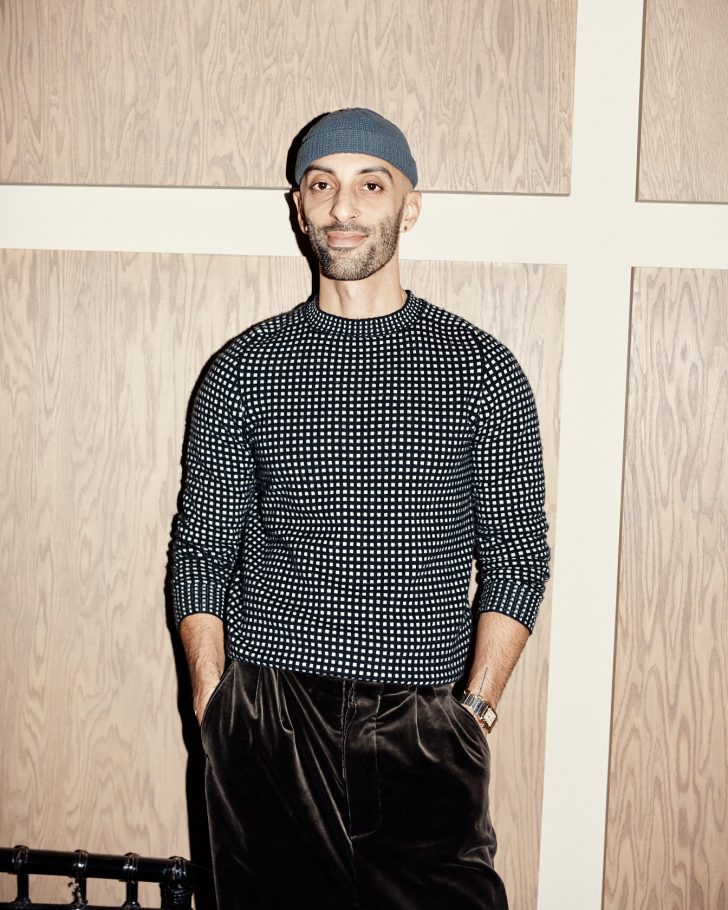 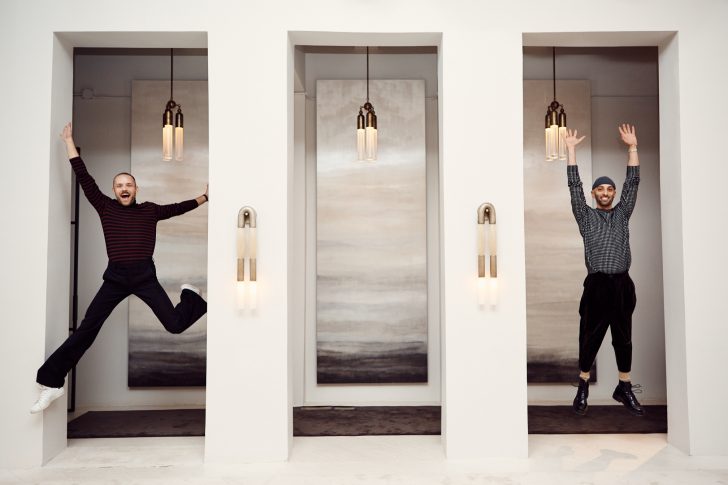 The story behind the mysterious moniker:

Gabriel Hendifar: “Jeremy gets the credit for coming up with it, but there’s something about having a word that isn’t either of our names or a mash-up of our names, that creates a sense of implied mystery about the brand and allows for an open conversation. Apparatus is a word that describes an object that performs a particular function. And it starts with an A, so you’re always at the top of the list [laughs].”

How to turn your passion project into your job:

Jeremy Anderson: “I went to school at University of Minnesota and studied communications. I always did pottery as more of a hobby, but I never really claimed it as something I could pursue as a career. After school, I moved to Boston and got a job with a media research company and worked with PR agencies. They moved me to New York, then out to L.A. and then back to New York. Gabe was going back and forth to L.A. consulting, but my job brought us back to the city. I was there for 13 years and then Apparatus kind of took off. They were great to me, but I was just ready for a transition at that point in my life.”

GH: “I studied costume and scenic design at UCLA. While assisting a graduate student in the theater program, I was at a fabric store in L.A. called International Silks and Woolens, shopping, when this woman approached me. She was fashion designer Jennifer Gheur of J. Mary and said she needed an assistant. So I kind of fell ass-backwards into fashion and worked with her for eight years. That was one of the most incredible design educations that I could have possibly asked for. After that, I worked with Raquel Allegra.” 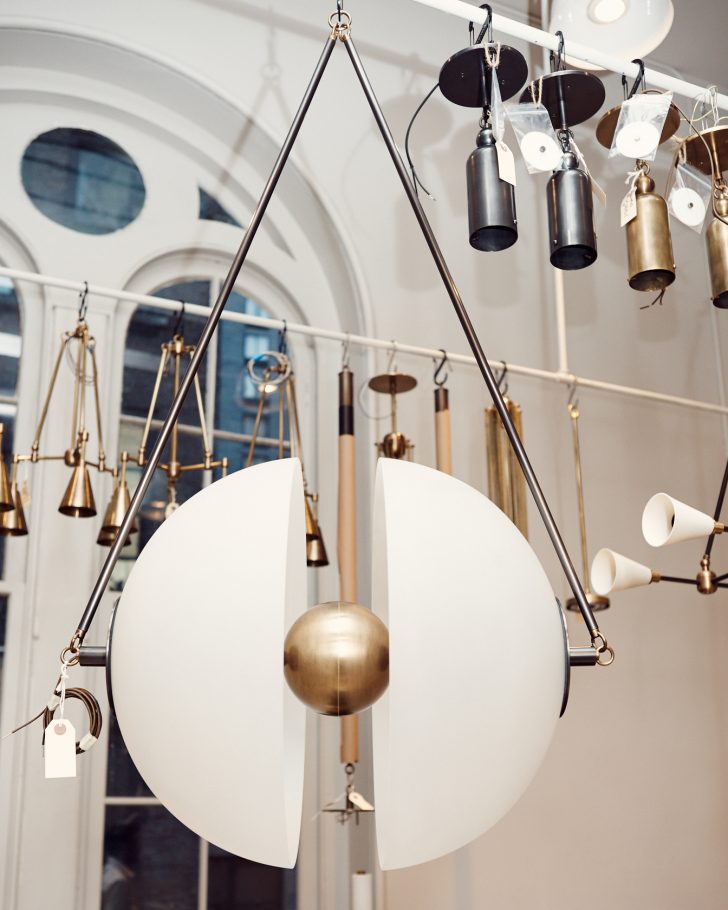 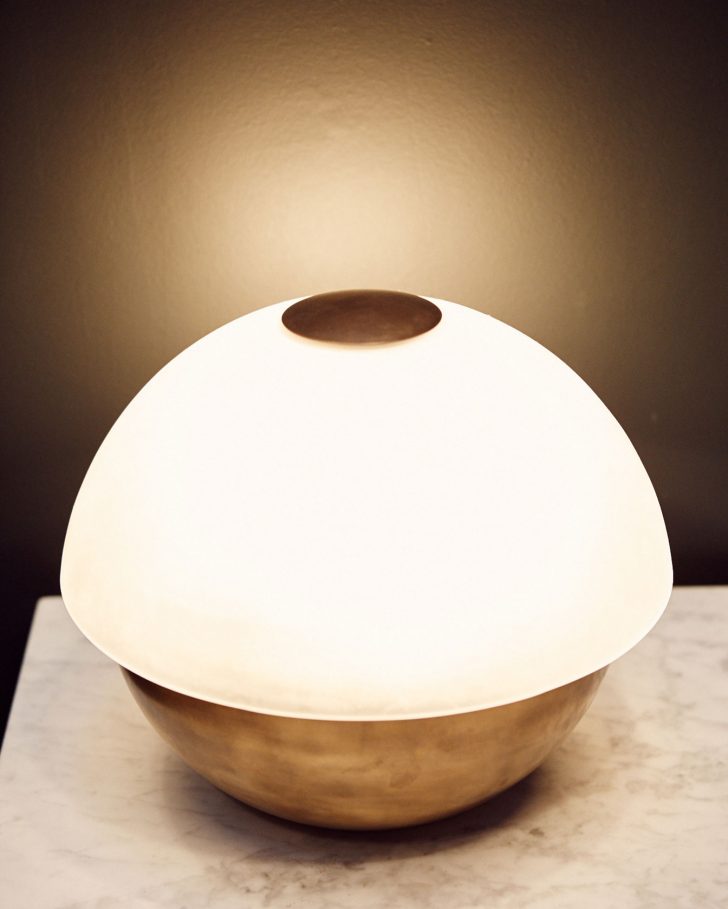 GH: “Our aim more than anything is to create an emotionally resonant moment. Part of that is designing an object that you desire. What is it that makes you look at something and have it be just a beautiful thing versus a beautiful thing that you’re like, ‘I can’t live without this, I *have* to have it in my life!’ That’s a whole complicated emotional conversation that I know how to access through my training as a costume and set designer, thinking about the full environment that you’re in—the context of the thing, the room, the light in the room, what does it smell like, what does it feel like, etc…

“It is a very 360 experience, and as a young studio, the way that we first assessed that was through lighting specifically. The longer we’re around and the more resources that become available to us, the conversation becomes bigger and bigger. So now it’s about furniture, and then it’s going to be about the entire space.” 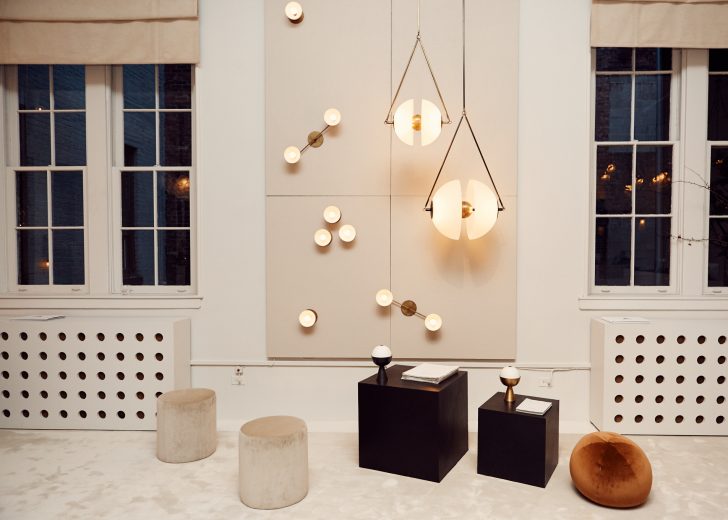 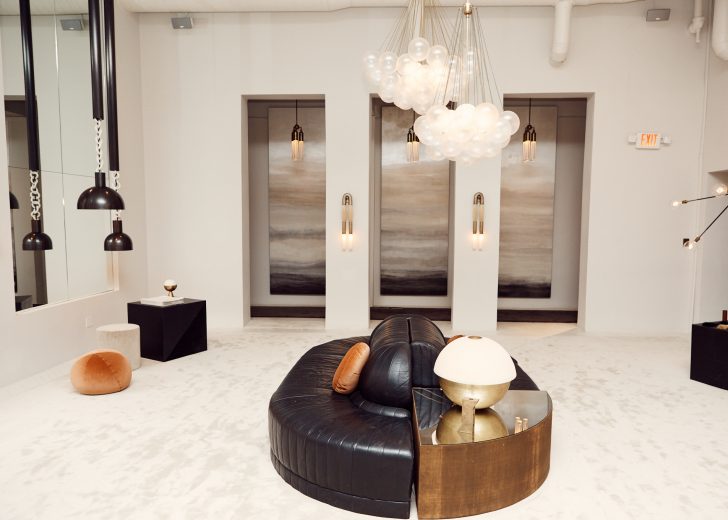 JA: “It was formerly the studio of an artist named Philip Taaffe. The history of the building is kind of wacky. It was a school at the turn of the century and we occupy the fourth floor, which was the gymnasium. The base purpose is to show our work so people can come and see and imagine things in their own environments, really driving home that sort of transformative, emotional moment. For that, the goal was to create a space that felt very residential and loungey, sort of like where you just want to hang out on the floor and smoke a cigarette and have a glass of champagne and feel, even if just for a moment, like you’re not in the middle of New York. We were definitely looking to Halston’s and Yves Saint Laurent’s iconic apartments—this idea of a space that feels sexy yet welcoming and kind of earthy, but not too granola.”

GH: “I love that [Instagram] is a barometer of what I’m feeling slash the studio is thinking about on a particular day. Pinterest is an amazing tool, too. But I think one of the things that is maybe a downside is that we’re all looking at the same images and references. So if somebody is really excited about something that they are researching and the whole world has access to it, then all of a sudden we’re all doing Moroccan Berber carpets and Danish furniture. There’s always going to be a zeitgeist and things that everybody is thinking. So I love the idea of a little bit more mystery and secrecy around what things inspire us and for you to have to dig a little deeper to have to make the connections. We’re not super public with all of our image references.” 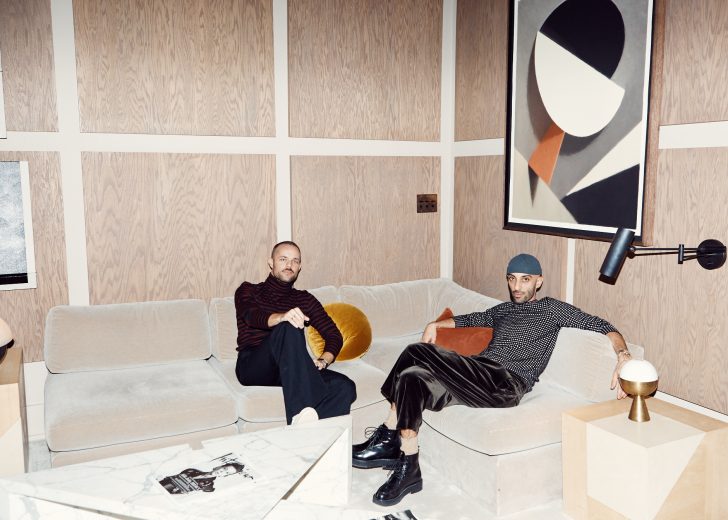 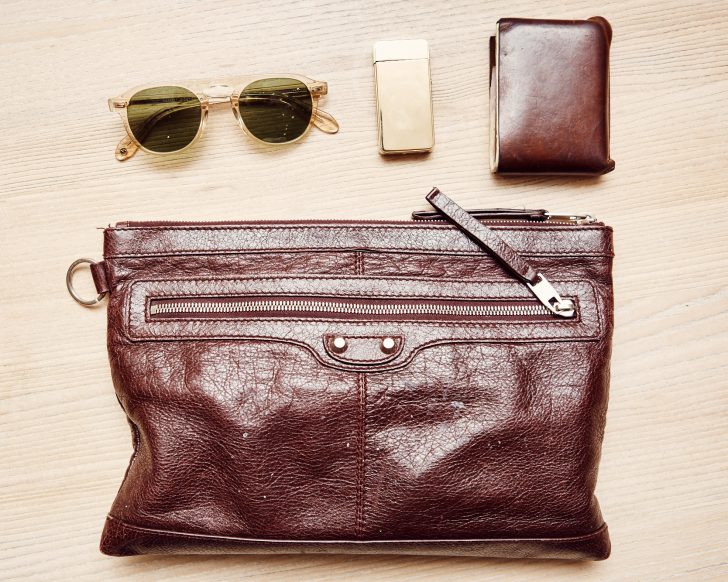 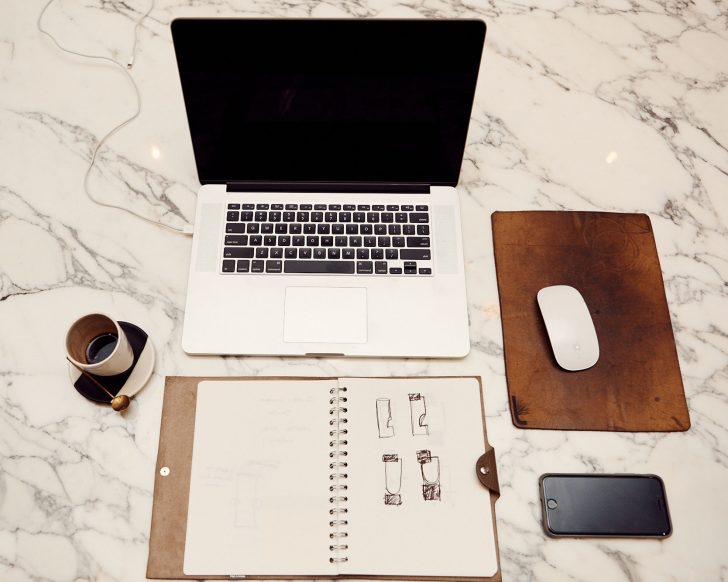 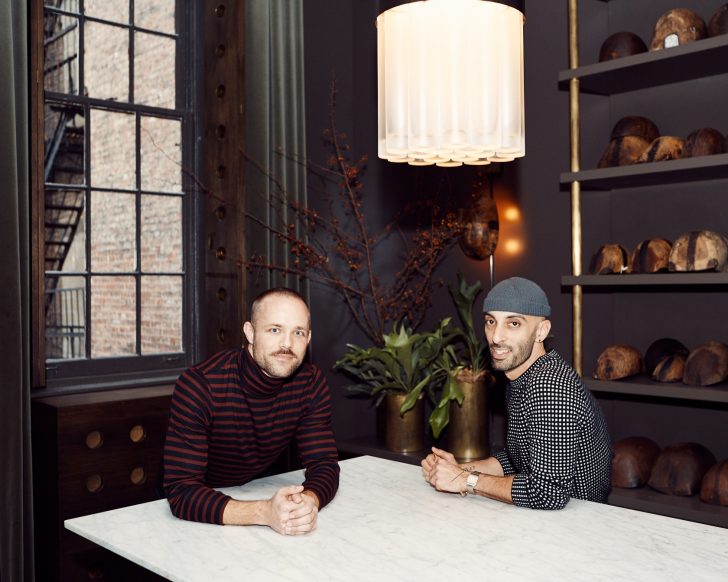 Their not-so-secret dream design project we all want to see:

GH: “We’re both dedicated Dries Van Noten fans. It would be a fantasy creating a studio for Dries, the man can do no wrong, it’s all good on top of good. When we were in Paris, our jaws dropped in the men’s shop.”

JA: “We also have a fantasy that there are some small hotel projects or this little bed and breakfast in the future for us. We have a house in Rhinebeck so we’re spending a lot of time upstate.

“We keep talking about this idea of emotional experience, and the way that you can do that with the most clarity is in a space that somebody doesn’t actually spend their entire life in. There’s something about designing spaces that are meant for a heightened sense of occasion that feel really interesting. It’s about what you feel like when you go to dinner for three hours or stay in a hotel and the impression that that space and that experience leaves on you.” 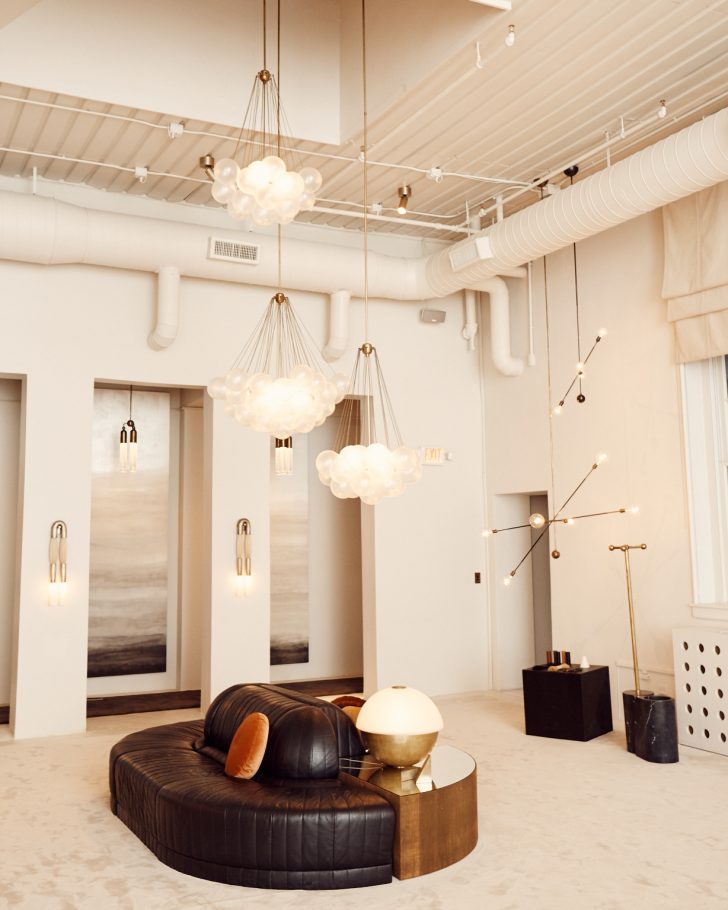 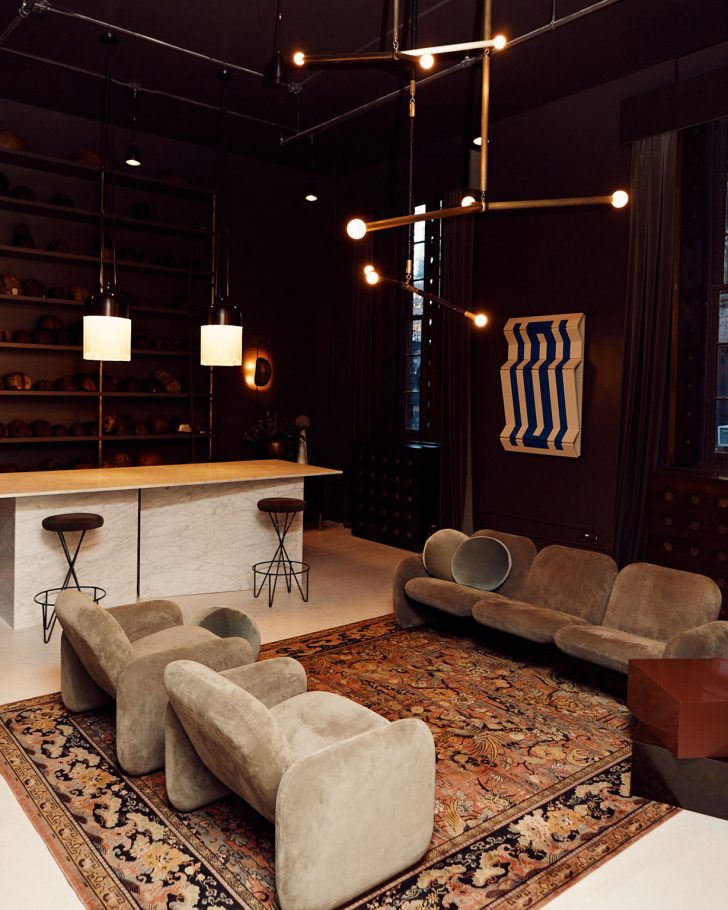 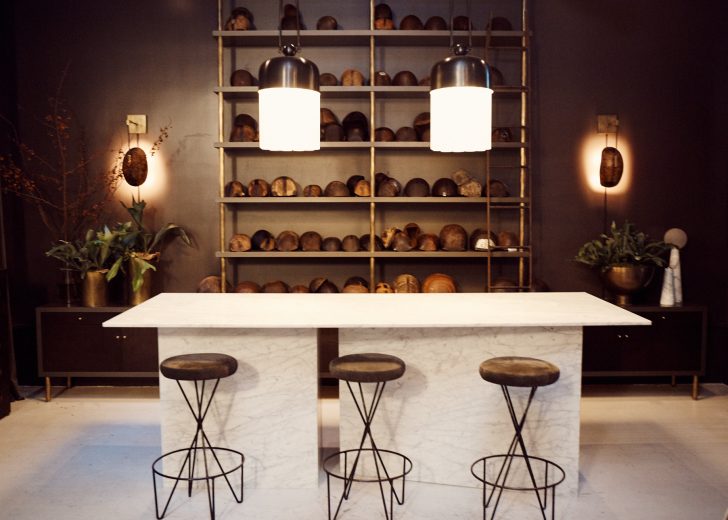 How taking risks is a part of a successful recipe:

JA: “We made the things we wanted to see. We were like, ‘We believe in these designs, let’s find out what other people think.’”

GH: “The business has grown entirely organically. We don’t have any investment and built this from the ground up. And there have been a lot of moments where we looked at each other and were like, ‘Okay, we’re about to move into a 10,000-square-foot space in Manhattan. Are we fucking crazy? Like, why are we doing this?’ It’s about taking risks when things feel a bit tight and a bit scary.