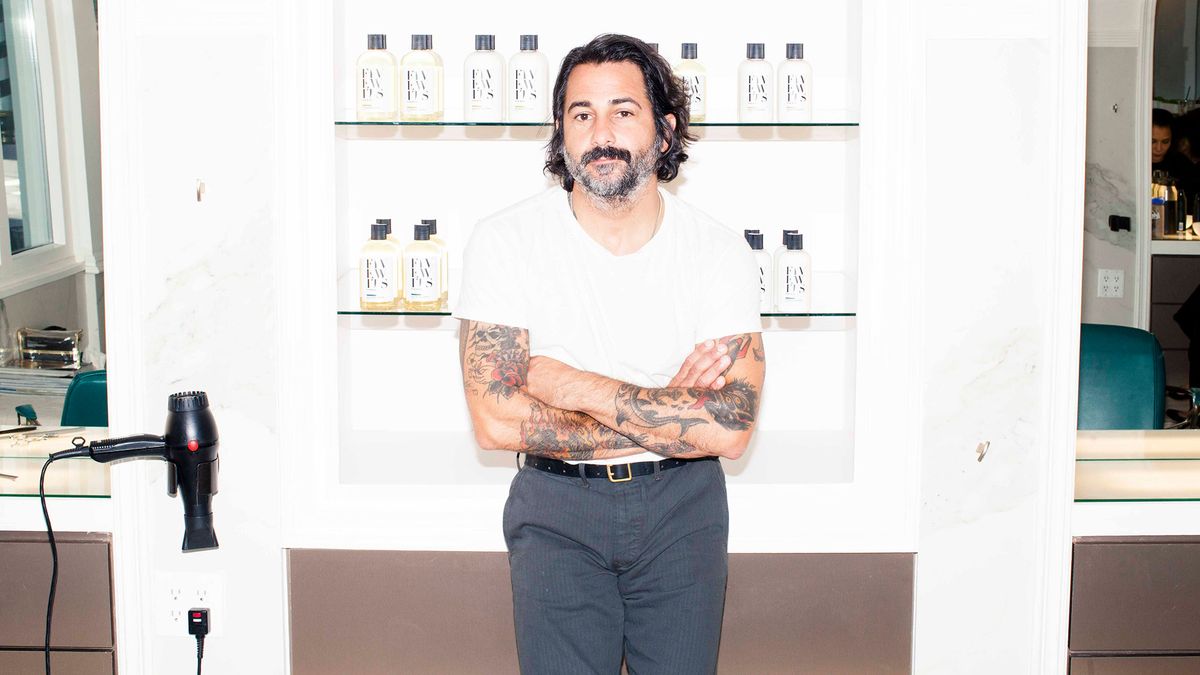 The cool kids being Alexander Wang and Chloë Sevigny.

When Joey Silvestera cuts your hair, there’s no bullshit. There’s no heading uptown only to be intimidated by a super clinical, glossy af salon where you really get all The Stepford Wives feels—which, don’t get me wrong, sometimes is nice. But then sometimes you just want a wash-and-go haircut in your neighborhood by someone who most definitely doesn’t want to gossip. Who will cut your hair with the extreme detail and efficiency of someone who knows you’re not going to style it again that same way when you wash it yourself—or probably ever again. That’s not to say that Blackstones, the Joey Silvestera salons, aren’t inherently beautiful in their own way—and totally different. The OG East Village outpost is more cabinet-of-curiosities, while the newly opened salon inside Tribeca’s Roxy Hotel is French-boudoir.

Born and raised in the Philly suburbs, Silvestera, who comes from a family of hairdressers, got his start cutting hair for neighborhood kids when they couldn’t achieve the look they wanted at local barber shops. Fast-forward to 2007, when a similar feeling led him to founding his own salon, Blackstones, after years at Toni & Guy, Mudhoney and ABC Carpet & Home’s Beauty Parlour—and a brief career stint as a taxidermist (okay!). Silvestera can wax on about this no-fluff approach to both hairdressing, salons, and products. Did we mention his line of hair-care products, Five Wits? It, of course, follows a similar no-bullshit approach (can you see the underlying theme yet?), consisting of only three formulas, which will suit almost every hair type. Pair all this with a causal client roster of everyone from Helen Mirren and Haley Bennett, to Alexander Wang and Parker Posey. Most of whom have graduated from walk-ins—based on the salon’s appearance alone—to regulars. And you’ve got what we’d call a recipe for success.

His career path in a nutshell (neighborhood barber to taxidermist to salon owner):

“I grew up in the suburbs of Philadelphia and hung out in a predominantly black and Italian neighborhood. The kids I grew up with and I were of the break-dancing era, so we were into these specific haircuts. But the Italian and African-American barbers would never cut hair how we wanted it. So I bought clippers and became the neighborhood barber. There’d be kids break-dancing and listening to boom boxes and I was the guy cutting hair.

“I went to school to be a taxidermist, but was still totally into hair, so I moved to New York at 22 years old and apprenticed at Toni & Guy. I immersed myself in a corporate salon where there were a lot of things that I loved and didn’t love. Most of the scene was bigger-named Upper East Side salons. There were a lot of cool smaller salons happening downtown, but they lacked education programs. I knew you could take the two and put them together. So instead of a big factory-like salon of twenty chairs in a stuffy environment, you could do something smaller and casual while still offering high-quality service, minus all the stuffiness.

“Later, I managed the ABC Carpet and Home location of a small rock-and-roll salon called Mudhoney. I realized I wanted to do it on my own, and ended up taking over the space and called the new salon Beauty Parlor. It was a ’60s Hong Kong-type beauty parlor. In 2007 I opened Blackstones with four chairs. I wanted the salon to look like a French curiosity cabinet museum, so we filled it with taxidermy and curiosity cabinets displaying the evolution of different hair tools.”

What separates his product line from others:

“The Five Wits line is made up of three shampoos and conditioners, we stripped it down to very simple formulas that cover all different hair types. It’s made by hairdressers, then tested and perfected at the salon on probably the pickiest people in the world. The line came from not liking a lot of the products out there and wanting to simplify it.

“To incentivize clients to be more conscious about what they do with their plastic bottles, we created a refill, recycle, reward program. You bring the bottles back and have the option [to] either refill your bottles inside the salon or recycle them with us. Regardless, whatever choice you make, you get rewards in the form of a few dollars off. To add to the experience of being more conscious about what you’re doing with the planet, we have four-gallon glass tubes that look like a Victorian distill dispensary inside the salon. All our products are made locally, twenty minutes north in Rockland County. We do all our own packaging and labeling in-house at the East Village salon with PET plastic, the best recycled material next to glass. Upcoming we have a launch of four new products, making it a full hair-care range. We’re going to disrupt the way products are made and designed.”

How his cool-kid client roster came to be:

“We have a really interesting clientele, people have said it’s ‘Wall Street to Vogue.’ I started cutting Alexander Wang’s hair when he was interning at Vogue. I would cut a few of the editors’ at the time. Through word of mouth, I built a very strong base of fashion and beauty editors.

“There has been a lot of random salon drop-ins by celebrities. I’ve been cutting Interpol’s hair for the last ten years, Paul Banks, his ex-girlfriend Helena Christensen, Paul Sevigny, who then told his sister Chloë [Sevigny], I got a phone call that she was in the salon and wanted to get her hair done. I was somewhere in the city, dropped what I was doing, and cut her hair. Parker Posey came into the salon on rollerblades. It was probably the fastest haircut I’ve ever done. She was like, ‘I have to be somewhere. Just do it fast, I’m leaving wet. I’ll just let the wind dry my hair when I rollerblade.’

“Helen Mirren lives in the neighborhood, and would walk by all the time, finally one day she walked in and said, ‘I would like to get my hair done.’ And she’s been coming back ever since. Haley Bennett recently knocked on the window while we were closed to get a haircut. So it’s been very organic—the salons are very inviting and attractive. Aside from celebrities, people just walk by, see what is going on, like the vibe, and immediately want to jump into someone's chair.”

How his feelings on styling differentiate his cuts:

“I’m definitely not a ‘before and after’ makeover-type hairdresser or that is looking to cut your hair off. The most subtle details, like adding bangs to long hair, changes everything. It’s important to understand the client: How long has it been since your last haircut? What are you rituals at home? How much time do you spend? I want people to recreate what I give them at home. I work with the natural texture of hair and am not a huge over-styler. If you have the right shape, it should sit perfectly right out of the gate and should last all the way until you need your hair cut again. You get a lot of longevity out of the shapes I build, which are super user-friendly and minimal in styling.”