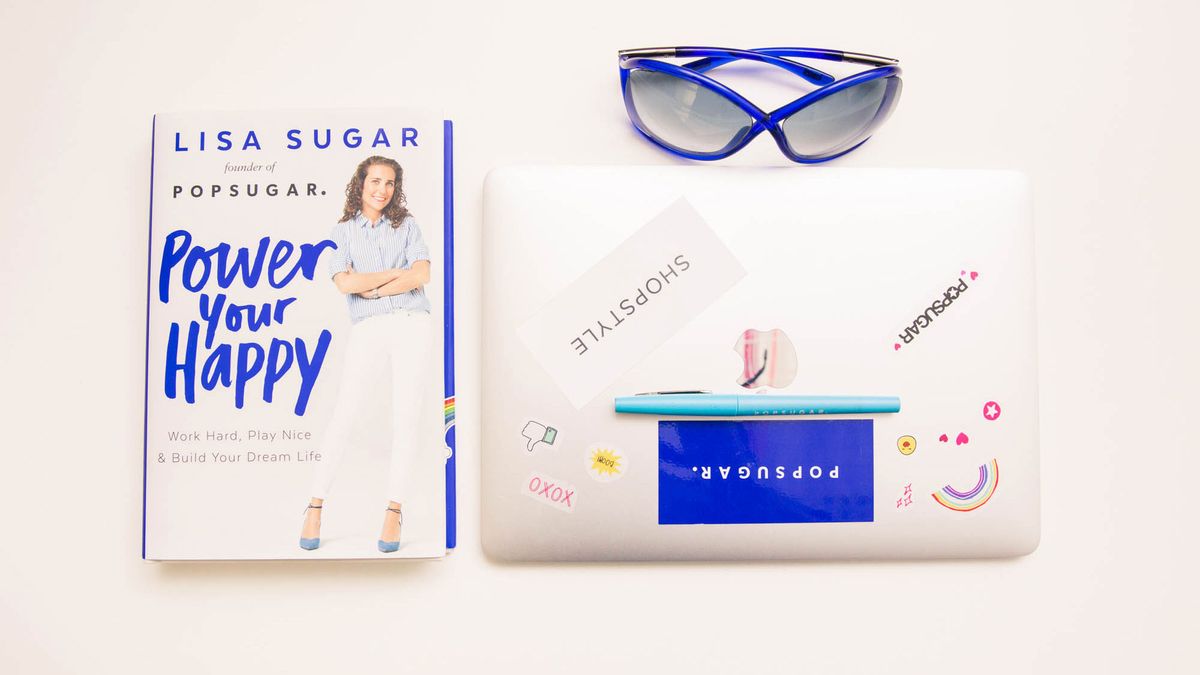 It was all business and Birkins when we sat down with Lisa Sugar.

PopSugar president and founder Lisa Sugar bought her first Birkin recently. And while we’ve seen our fair share of Hermès in the land of over-the-top Coveteur closets, this electric-blue bag in particular stands for a lot more than just a love for all things pretty and extremely well-made. You could say it serves as a present to herself after releasing her first book, Power Your Happy, which details how she and her husband, Brian Sugar, transformed and built the site from the ground up, along with a heavy dose of career (and general life) advice. Or you could call it a memento celebrating all things PopSugar (whether that’s entertainment, fashion, beauty, fitness, food, home or parenting), since the brand—and Sugar’s favorite color—is of course that exact shade of electric-blue.

After sitting down with Sugar in the New York offices (where sugar, books, and yes, lots of blue, run wild) and hearing about everything from her career path, to her balance-not-required approach to life, to her advice for nailing that nerve-wracking interview, all we can say is that if we’d started writing about celebrity culture alone at our kitchen table and transformed it into a massive media empire with a super casual global reach of over 100 million unique visitors per month, we’d treat ourselves to a Birkin, too.

How PopSugar came to be (it all started with a pop culture obsession):

“I lived in New York and was trying to get into entertainment but nothing was really working. I worked in advertising, and it was fine but then I moved to San Francisco and I knew that it was not a job I wanted to be doing in my thirties. I tried to figure out what I liked about the job and what I could take away from it. My husband Brian [Sugar] built PopSugar, taught me some code and I started writing before and after work. A friend urged me to write about what I thought was useless knowledge of celebrities, fashion and beauty. People loved it—it was written in first person, just a girlfriend telling you something and people really resonated with that voice. It was different than all the snarky or boring writing of more traditional media houses that had no personality at the time.

“PopSugar had this really fun, friendly, optimistic voice, people loved it and it grew really quickly. In the first year we had over a million readers and that was back in '06. So I had been doing it for a year. Brian said 'This is awesome! I'm going to quit my job and we're going to replicate a newsstand.' The idea was originally to disrupt the newsstands that were not really going anywhere, magazines were not really online yet.”

The moment she knew it was a success:

“We got funded and then went on a hiring and training spree to keep the PopSugar voice consistent. We hired people who wanted to help others live a happy, healthier life. We wrote just all these short, fun stories—now we do more long-form—and introduced video six years ago, which is a huge portion of our everything. Celebrity, parenting, and health and wellness are our three largest verticals. Fashion and beauty is also huge for us, which gets me excited because there have been so many competitors along the way and there are so many other beautiful sites out there.

“Hitting one million visitors was one sign that PopSugar was a success, and then some of the stories that went viral that put PopSugar on the radar. People found it and then came back every single day. I started writing in March of 2005, and six months later I quit my job in advertising because it was growing so quickly. Brian was saying, ‘Let’s not worry how to monetize it yet. Let’s just get this audience!’ It became a matter of getting myself off the couch and my pajamas to get lunch or take my dog out for a walk or something. Even if you are so passionate about something and are putting in your 24/7, it’s important to find a little bit of time to figure out what is good for your health. For some it’s meditation, for me it’s a walk or a SoulCycle class.”

What it’s like going from being the sole writer to the boss:

“I’m proud of the fact that we now employ 500 people at a profitable company. I hope everyone loves coming here as much as I love to. People have a 101 jobs here, which I also love, and employees have switched into different departments or grown into leaders. I’m proud of those who started here at 23 and are now 33 and running a department. Watching people grow up and take on all different kinds of skills—if someone came in as a writer and now they are on camera or doing photography—is pretty cool! We are growing, so there are lots of open positions. So if someone is like, ‘That sounds really cool, can I move into that?’ I'm all for it.

“I do write for the site, though, but not as much and I miss it. One of the hardest things was learning to let go, because I had such an amazing team of writers capable of doing it without me and as much as I want to be a part of it on a day-to-day basis, there are other places in the company that need me. I am starting to get back to writing again, between the book and our recently launched career and finance site, where I’ll be starting a series. I did miss writing so much, so getting to write the book really got it back out of me again.”

“When I wake up, I immediately look at my phone to see if anyone needs me, then I hop in the shower, get my kids up, and feed them breakfast. I make our PopSugar Fitness ‘Flat Belly Smoothie’ shake every morning—it’s kale, almond butter, yogurt, pineapple and blueberries. I have a cup of coffee somewhere in between all that. I’m at the office by 8:30 and hopefully at inbox zero by 9:00. I try to keep that first hour to myself without meetings just so I am helping anyone who needed me from the middle of the night from the East Coast or abroad. Then it’s lots of meetings. I’m out of the office by 5:30 and home to have dinner.

“When I am with my family I unplug. After I put the kids to bed, I’ll answers emails for a bit and then unwind. There are times where I’m beat and need to zone out in front of the TV. I love SoulCycle on the weekends, which is hard because I really want to be with my family, too. But Brian is like, ‘You are so much happier after SoulCycle, so just go.’ That is his time with the kids too, then I come home in a great mood and I’m totally ready to take on the day.”

On purposely not achieving balance:

“Work-life balance is hard for anyone! Whether it’s finding time to go to dinner with your girlfriends, an exercise class, or a hobby. I prefer to be unbalanced, if life ends up getting too balanced, my husband and I, we have to add something else into the mix. Like another kid or a puppy! We keep growing and adapting to everything around us, it’s important for my kids to see that. They see how busy I am and at the same time my oldest, who is ten, says how proud she is of me. She gets it! She knows it’s special that her mom and dad work together, and we made this cool company and I have a book out and that I’m there to cuddle with her every night.”

“I was at the Hermès store and they had a baby electric-blue Birkin that I immediately fell in love with. I can’t even explain how cute this mini is. I was honestly not in the market for a Birkin, but I told the saleslady I would only get it in blue, because blue is my thing! Done. That day I never thought I would cave so quickly, but as soon as I saw it I was like, I have to have it. I called my husband, I was like, ‘I need to do this.’ He is so supportive, he was like, ‘You’ve worked so hard. Absolutely buy this for yourself!’ I kept it in the box for a month (I do that a lot for big purchases to think it through). I don’t carry it every day because it’s too special to me. Blue has always been my favorite color, but the original PopSugar logo was pink. Then I had three daughters and became sick of pink, I purposefully dress head to toe in blue and all my bags are blue. We finally switched the site and logo to blue, and it’s much better!”

Advice for those aspiring to work in the fashion industry:

“I always reference the advice my dad gave me growing up, ‘Do what you love.’ I didn’t really know what he meant until I was 29 years old and the lightbulb finally went off. I don’t like it when people think you have to climb your way to the top. I don’t believe in climbing corporate ladders, it seems pretty old-school to me. There are obviously huge corporations that it is great to go and learn in. I’ve worked at large ad agencies and it was a great training ground in my twenties, but I didn’t want that mentality of having to get to the ‘56th-floor corner office’ where I was not going to engage with anyone. I don’t want that job!

“When interviewing, learn as much as you can. If it’s an internship, learn new things and offer to do new things. Don’t just wait for someone to give you an assignment. Take note of the things you like and don’t like about the job. Some people think they want to go into fashion, but they really don’t know why, it’s such a huge category, so find what you actually enjoy. Think of a job interview as a two-way conversation, come with questions. You shouldn’t feel pressure that it is all on you. Think about the atmosphere when you come into the office. Is it a place that when you walk in there you feel like you belong there, or do you feel really out of place? Are people too formally dressed or too casual? Maybe you envisioned wearing a suit to work every day, and if everyone is in jeans and tennis shoes you might not be happy! It’s really important to look both ways. It’s also very important to not be beneath any job, I’ve folded jeans at Urban Outfitters, I’ve cleaned gym equipment. I know it’s really, really hard to do unpaid internships, but that can lead to three more jobs later. If it seems like something you’d be interested in learning from, then figure out how to do it.”

“In the past ten years we have bought ShopStyle, a shopping experience site, which from a company perspective allowed us to diversify revenue so we weren't just an ad based business. Who knows what’s next! More books would be great, I'd love to do more video stuff—that is what I think our audience’s loves. We'll see how this book does and then we can decide on the next one.”

Visit PowerYourHappy.com to find out where you can get a copy of Lisa’s book and audiobook.