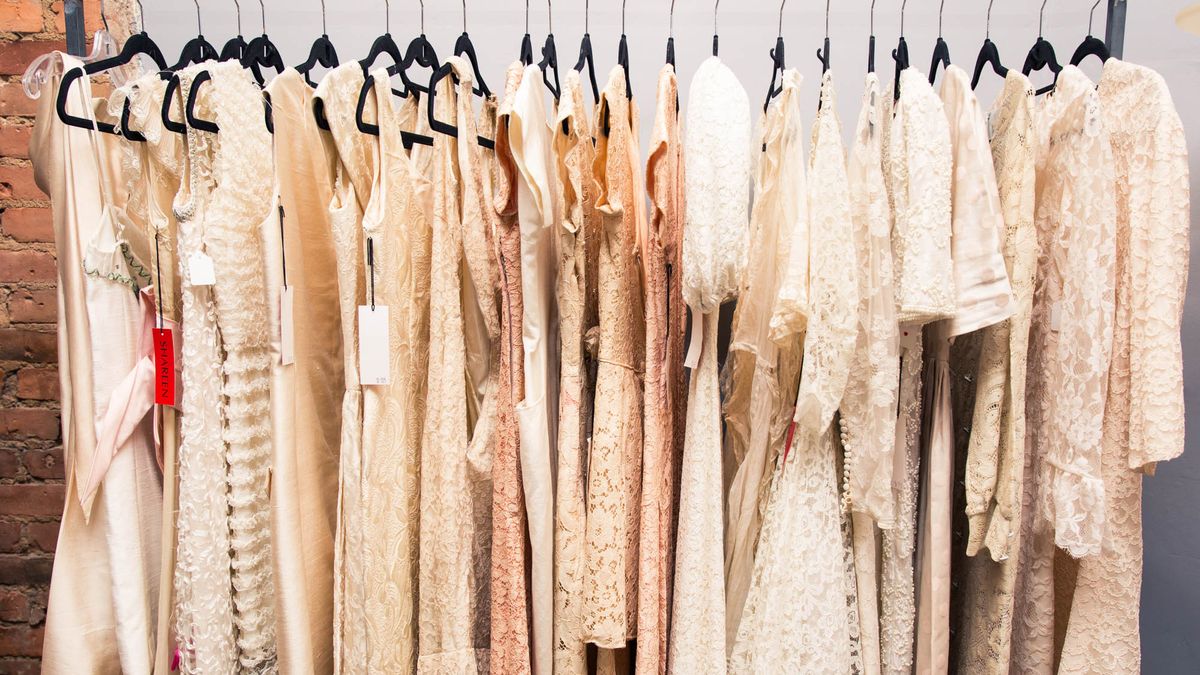 Wedding Dresses For The Vintage Obsessed

Shareen Mitchell shares how she turned a successful vintage shop into an in-demand bridal dress label.

Let’s say you’re a bride whose closet is filled to the brim with old-school silk blouses, vintage 501s, eBay scores, and flea market finds; a cookie-cutter, mass-market bridal gown that’s been photographed to death isn’t really your jam. Shareen Mitchell created her namesake vintage-reworked and -inspired bridal collection with just that woman in mind. And with over a decade of curating pieces for her successful vintage bi-coastal boutiques in Los Angeles and New York, she knows a thing or two about what her clientele is looking for. Think: timeless silhouettes, unfussy fabrics, antique lace, retro-ruffles, and dresses with pockets (!!)—it’s like Martha Stewart Wedding’s Senior Fashion and Market Editor, Jessica King puts it: “It’s for a bride who loves a sense of history with a modern touch.” Exactly.

How her label evolved:

“I started out selling vintage clothing that I reworked into more modern shapes to align [with current] fashion. That was in 2004. By 2006/2008 I had one of the most exciting vintage businesses in Los Angeles. By 2010, I opened up in New York and by 2013, I could see that vintage was taking a downturn. The market was becoming very flooded. I remember thinking I was going to be in some trouble just relying on vintage as a business model. Exactly at that time, the young women who I had been serving at the flea market, who you could imagine were 14-15 [years old]—it was now nine-ten years later, and I had done their prom dresses, I had done their winter formals, I had done their first black tie event—and they came and said they just got engaged, and asked if I would do their wedding dresses. I said, ‘No! I don't do wedding dresses.’ They were like, ‘Oh my gosh! Of course you have to do my wedding dress. You've done all my other occasions, you have to!’ I said, ‘No, seriously, I can’t touch it. Forget it!’ One of them was relentless, so I made her a dress and then I made another one and another one.”

How a certain dress led to her new business:

“I used to have this style [of dress] where I used leather straps. I would take a vintage skirt and break it down into a halter top, wrap it all up in leather straps and make a dress. Girls were crazy about them. I sold hundreds of these things, each one-of-a-kind. One customer asked me to make her wedding dress and asked if I would do it like the dress with the leather straps. I said, ‘No way! You are not going down the aisle in one of those dresses.’ She was like, ‘Shareen, that’s what I want! I want something sexy.’ So I made her the dress—we decided to use platinum straps. I made a second one on a whim. I put it in the store and it sold in five minutes.

“I made another one and another one, and by the fifth dress I sent it to my NY store where they placed it in the store. At the time, there was a blogger who had become a vintage fan of mine. She loved the stuff that I was creating and used to come to the store in New York to borrow clothes for photo shoots. She photographed herself in this dress and it went viral on Pinterest. You don’t understand, it was a phenomenon. I got letters from around the world. Within months, I was receiving hundreds of letters saying, ‘Hi, I’m in Singapore! Hi, I’m in Australia. Hi, I’m in London! I saw this dress; this is my dream dress. Can you please make me this dress?’ We had to explain to them so carefully that this was a one-of-a-kind re-worked blah, blah, blah, and that I don’t make wedding dresses.”

On her label’s organic beginnings:

“Now, three years later, I can tell you that both of my stores in LA and New York would be closed if I hadn’t listened to my clients who were reaching out and saying, ‘Do this! Do this.’ I've led a very organic business. Now this store in New York is 100% bridal and evening wear. I sell no vintage in here. We keep some vintage bridal in here because it’s beautiful and girls love looking at it, but they don’t buy it because it’s not wearable unless you are very conservative or totally outrageous. You either have to be Lady Gaga or a nun.”

The type of bride who wears her designs:

“What speaks to [the women that come into my store], what they understand from the collection, is that I do timeless classics that are under-embellished for the reluctant, embarrassed bride. I’m still dressing the same girl who used to get dressed in vintage, but now she is getting married and she has grown up. She may never wear vintage again, and she may have never met me before, but it’s the same kind of woman. She’s an independent person, she’s not at all commercial, she needs to have a voice in everything she does, meaning she has got eyes for herself, she knows what she likes. She’s doing a wedding that is incredibly authentic, very real, nothing that is in the commercial world would align to that because she needs a real personal experience. She is just that girl. As it turns out she is very millennial. She is very much what is happening now in the economy. And due to what has happened in the bridal world, few people can afford the real uberexpensive dress. So my collection is $2,000 and under.”

Where she pulls inspiration from:

“I’ve been dressing women in vintage for 12-14 years. I’ve also been a big buyer of vintage. It’s almost like I’ve put myself through design school by doing this business because I have seen the best and the most beautiful things from different ages. My brain is filled with every kind of silhouette and how to construct them. I get my inspiration from a vast wealth of experience. I started my career at Mademoiselle magazine as an assistant to a fashion stylist. I was the associate booking editor at Vogue in New York. That was my second job out of college, my third job was I was a national scout for Elite Models New York. I was the co-director of Elite Models Paris. I don’t want to date myself, but that was all in the late ’80s, so you can imagine the supermodel world. What I got to see and what I got to know and the education I had in terms of taste [is unmatched].

“Then I came back to America to become an actor. But I had taken a year of costume design in college, so I knew how to sketch, source and build. All of this got woven together. Then I was an actor, which really taught me a lot about myself more than anything else. So my inspiration comes from my experience and it comes from vintage for sure.”

Why she doesn’t believe in trends:

“I don’t like any trends for brides. I don’t believe in trends—bridal should be timeless because you are going to look at yourself 10 years from now and say, “What was I thinking?” Currently the trend is more towards simplicity than it is to a particular shape. I won’t do a cut down all the way to the butt crack, I’m not interested in my name on that. I’ll scoop out a back to just below the waist, but that’s it.

"I don’t like anything overly embellished, but every once in a while there is something embellished that is like oh-my-god-so-beautiful. I can’t do that yet, the big embellishment, but I’ll probably get there.”

What’s next for her:

“My philosophy for the company is that we are not allowed to say ‘no’ to anyone about anything. If the customer doesn’t see it on the rack, let’s talk about it because I’ll build it for her. Because if I build it for her, it’ll be tasteful. I will use a beautiful textile, I won’t do anything tacky, nothing trendy. I will never knock off another designer, ever, ever. I don’t do anything that is overdone. If she can align herself with that, she will get something gorgeous. I’m starting to do a lot of custom. Forgive me this expression but I’ll let my clients kick my ass because they push me out of my [comfort zone].”

To see Shareen's entire collection, head on over to our pals at Martha Stewart Weddings.