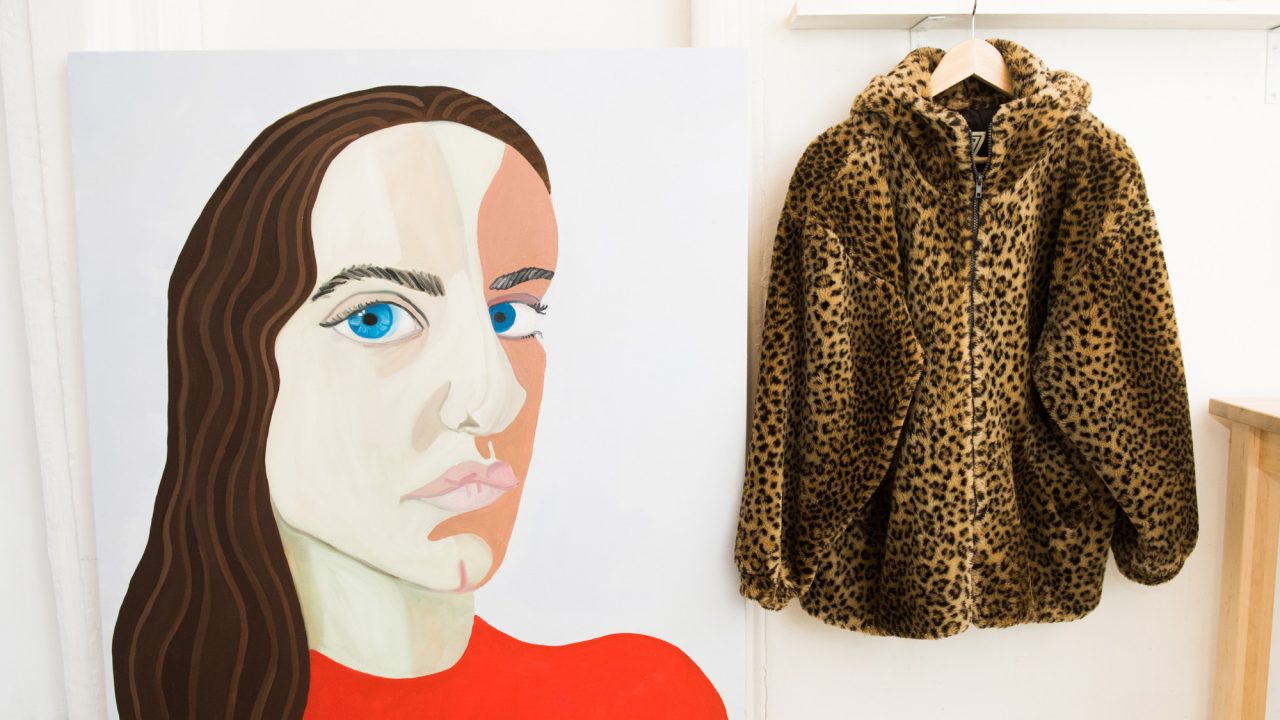 What exactly does it take to be an artist these days anyway?

Surprise, surprise: the life of a working artist in 2016 isn’t all Paris garrets, whiskey at noon, and painting “French girls.” But that doesn’t mean all the romance is gone. If you’re Alice Lancaster, one of our favorite artists who actually makes her living by painting, it just means the romance of being an artist has moved to a walkup in Chinatown; and that instead of compatriots like Gertrude Stein, she has Francisco Costa (formerly of Calvin Klein), Dev Hynes of Blood Orange, and Veda’s Lyndsey Butler (the leather jackets Lancaster designed with the latter are the collector’s item of the season).

But what does it actually take to make it as an artist these days? That’s what was on our mind when we sat down with her at the aforementioned apartment—because if any industry is harder than fashion to break into, it’s art. Here’s how Lancaster is making it happen in the art world with her wildly expressive and colorful work—and how she made the fashion industry sit up and take notice. 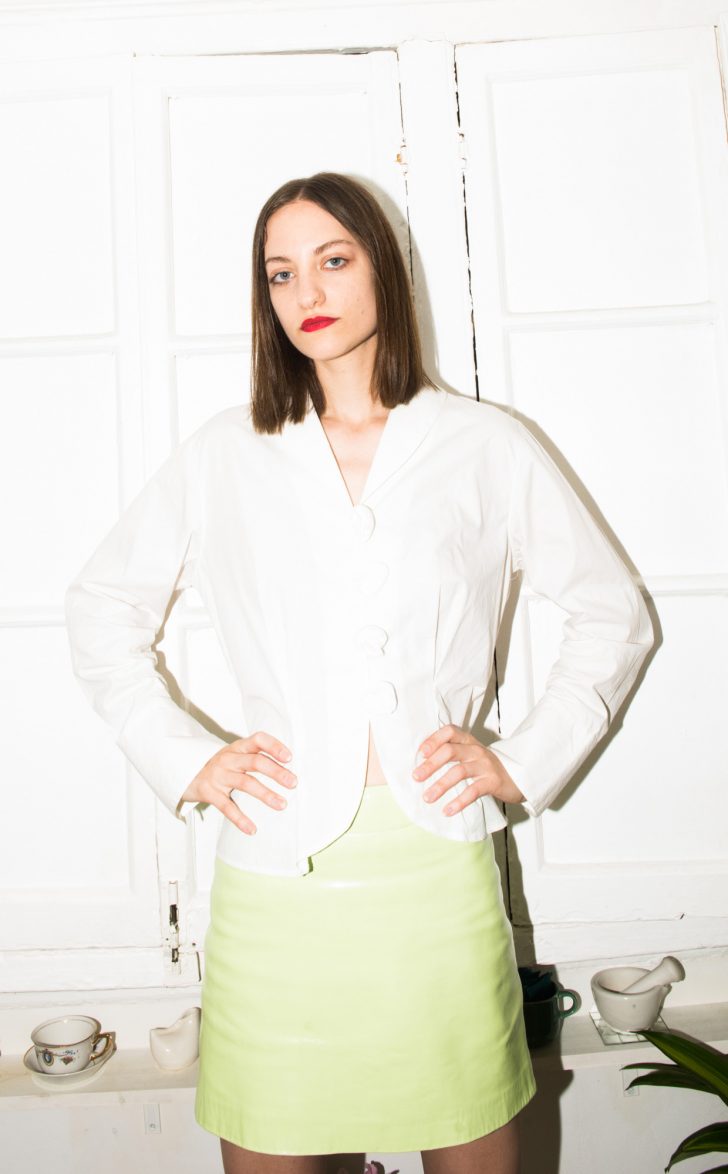 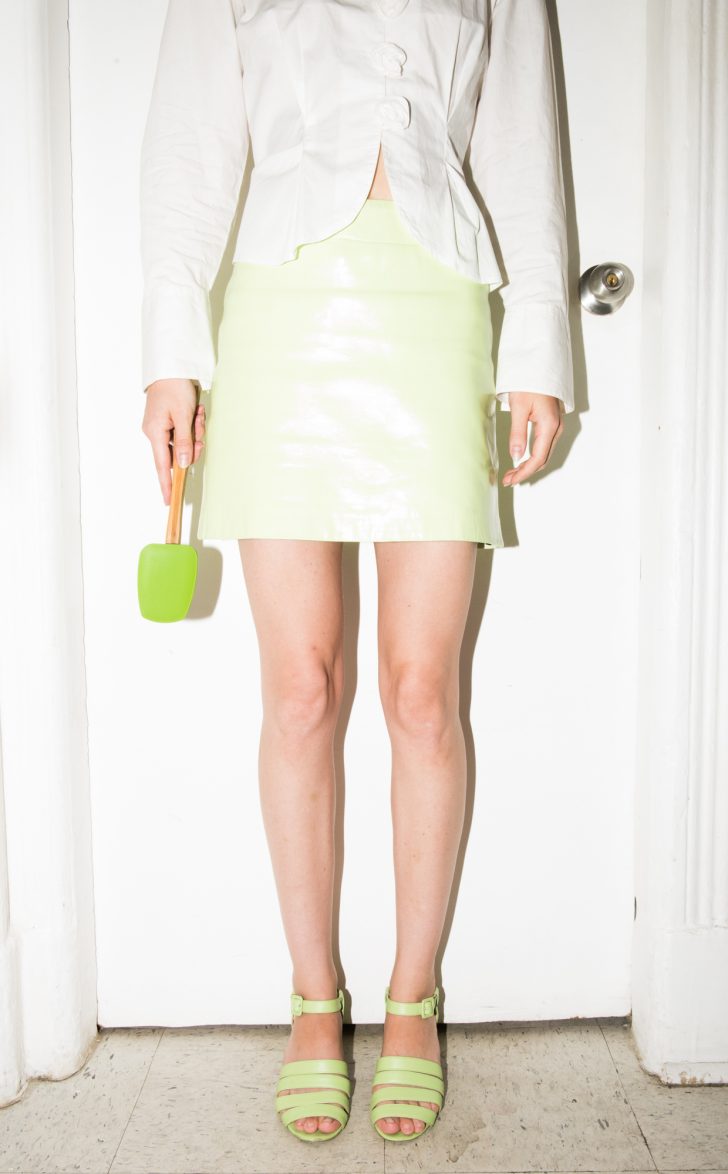 How she made the decision to make a real play at being an artist:

“I started off drawing a lot of portraits in 2007, when I was living in Chicago. Then, I stopped drawing and took photos, but I realized I wasn't going to be a photographer—that couldn't be my career. They weren't that special, you know? In 2011, I moved back to St. Louis (where I'm from) to save up money so that I could live in New York. As soon as I moved here, I was like, ‘Alright what are you going to do? You're in New York City now—you have to do something.’ I decided I wanted to be a painter and that is what I started doing. I've never taken a painting class. It was really tricky figuring out oil paints—it took lot of trial and error. I made the decision first and then went for it. My friend Petra Collins moved to New York around the same time and we showed our work together. She got a lot of acclaim and she was promoting all of her friends at the same time. That is how I merged into the art world. I've since gone my own way.” 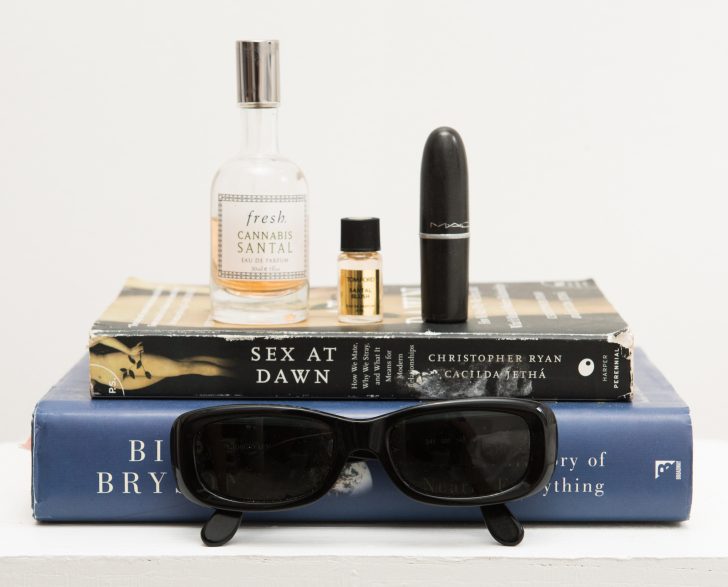 How she developed her style (through teaching herself how to paint):

“It just happens naturally. I have influences, like Willem de Kooning, but I never wanted to make paintings that look like his. There are certain color palettes by certain artists that I look to, but it just came from teaching myself how to paint. Teaching myself was really frustrating.

“The paintings I’m working on now are super-abstracted female figures. They are my attempts at trying to make abstract paintings and using an image of a female body as a reference. I'm trying to use as few lines as possible—I want people to maybe see the body, but maybe not. I gave the girl who lets me use a space as my studio a painting to hang up in her apartment, and she is like, ‘I was thinking of putting it here,’ and I was like, ‘That’s cool, but you know it’s the wrong way, right?’ She didn't see the body in it, she just saw it as an abstract painting and I love that. That made me so happy.” 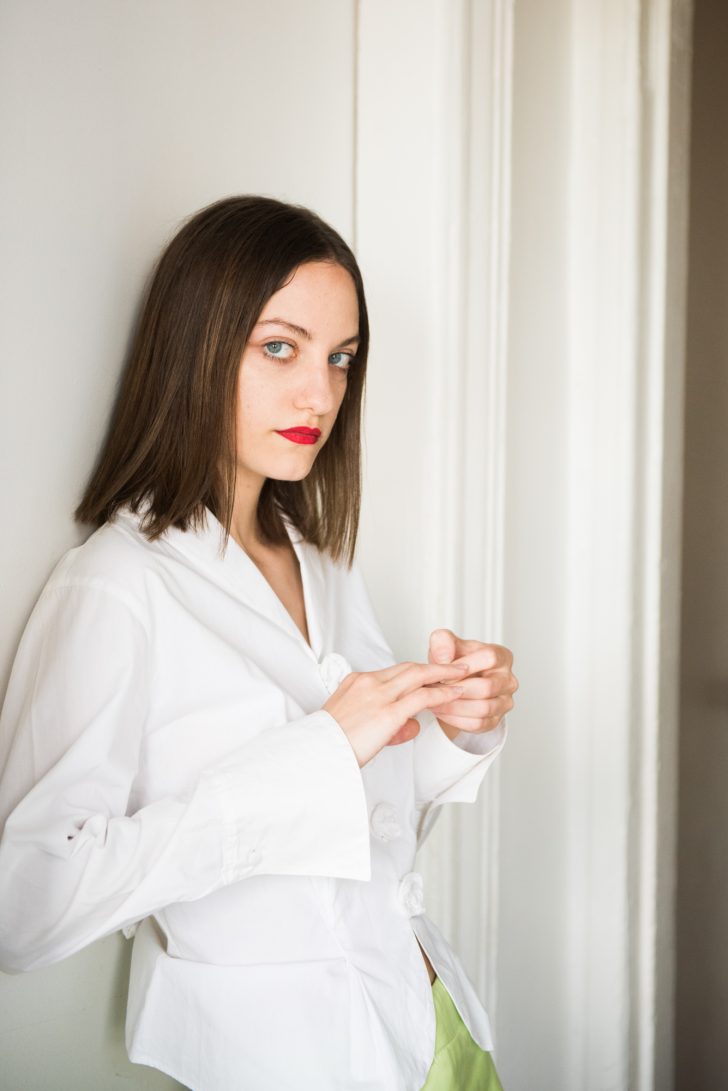 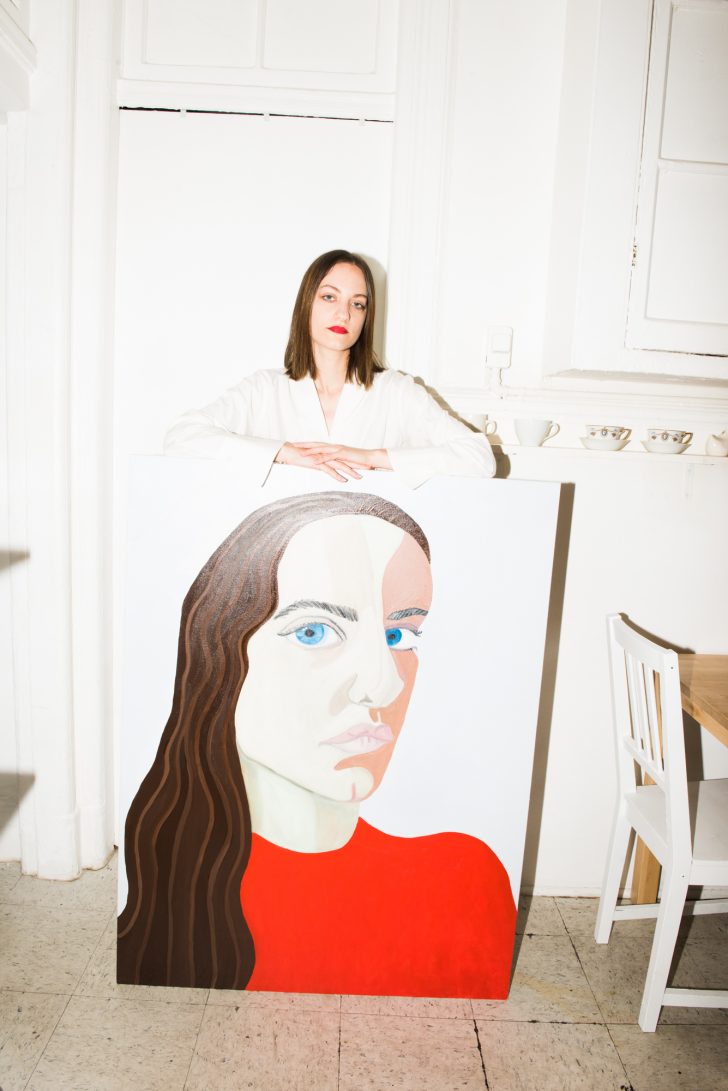 On the topic of feminist art:

“The paintings are really about composition. A lot of the times people will put me in this category of a feminist painter. I'm definitely a feminist, I believe in equality—it’s pretty basic. But I don't think I'm a feminist painter because I'm not putting any of those messages into my work.”

The emotional importance of color:

“I love color! I love cadmium red more than anything. I use it in almost every painting. I really don't like fuchsia and turquoise. I will never use them. Ever. I was at a show recently—we were looking around and came to a painting and I was like, ‘These colors really upset me.’ It's [like my lip color]. It’s M.A.C. I don't know the name of it, but red is the best. And a sky blue and a periwinkle.” 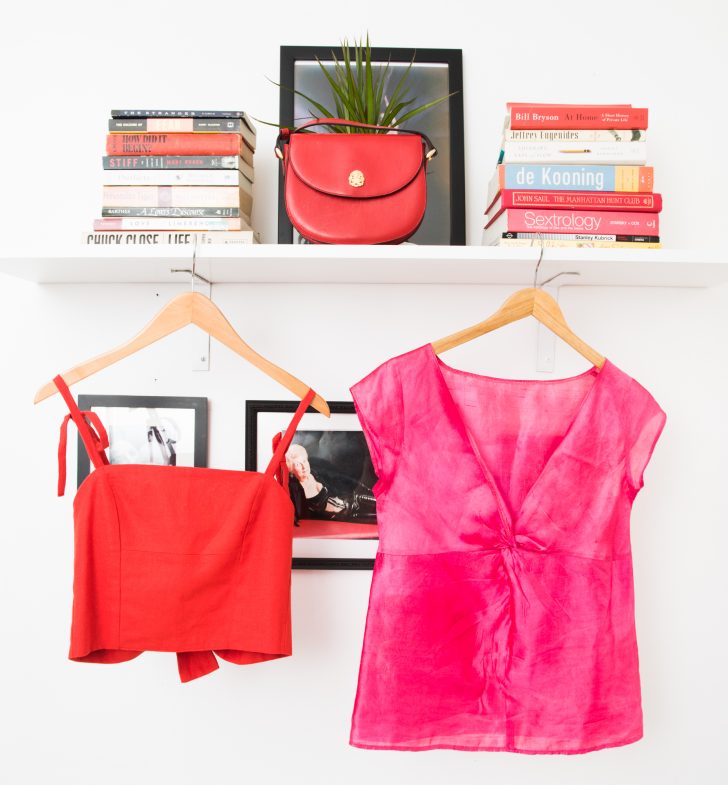 How she ended up collaborating Francisco Costa:

“I did some hand-painted leather jackets for Veda and after that, by chance, had a studio visit by Francisco Costa of Calvin Klein. We collaborated and that was a really pivotal moment in my career.

“I followed [Costa] on Instagram. I liked something of his that he just posted and I commented a bunch of hearts. Because he was on his phone, he went on my page and then liked a bunch of stuff. I was so happy with just that. A couple of weeks later, his secretary emailed me to tell me he wanted to have a studio visit with me. He came to my Bushwick apartment and looked at my paintings. It was so crazy. He saw them and was like, ‘Oh, this is to die for!’ He didn't buy anything, but a month later he invited me to his ready-to-wear show. I went to that. Then I sent him a little card and a drawing and thanked him for inviting me. Then we had the meeting about collaborating.

“I was surprised he wanted to work with me because Calvin Klein is so minimalist and I have so much color and stuff going on in my work. We ended up using a painting that was already done. It was the one he said was to die for. They used that as a template and they turned that into a pattern. That was it. It was interesting because I knew what the drawings looked like, but I didn't see any of the pieces until they were on the runway. I was expecting all these colorful things but it was all the black and white. It was so cool.” 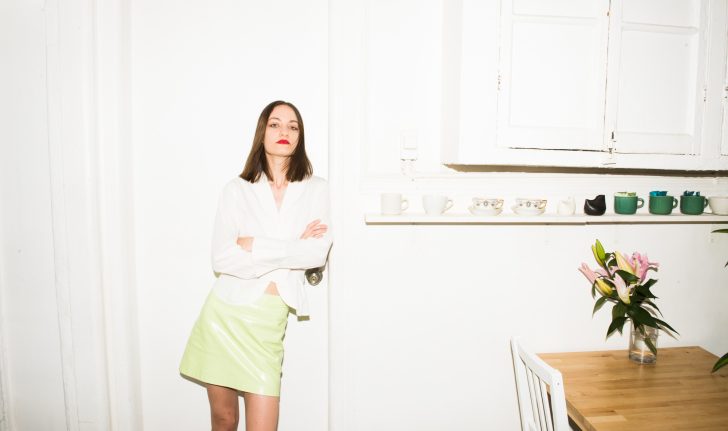 The collaborations keep coming in all different forms:

“I did a mural for Sweetgreen at 85th and 3rd Avenue. It's really crazy. I collaborated with Dev Hynes for a book called Feelings. He composed music and I made paintings, and we were working side by side. Some of my favorite paintings [that I’ve made], I made that day. While [Hynes] was composing—he was doing the same little diddy over and over again—I was doing the same painting over and over again. The same image, just different colors. I think these collaborations are important. Being a painter is really solitary. Being alone in a studio can be isolating and lonely. It feels nice to branch out and be with other people.”

“It's super risky. When did I feel confident? I think around the time that Francisco and I met because I had just stopped working retail. I was working for Maryam Nassir Zadeh. As soon as I stopped working there, I started selling my artwork there and I was selling a bunch of artwork on paper from my website. After not working at the store for a month or two I was making more money selling art than I had at the store. After that I felt good about it.” 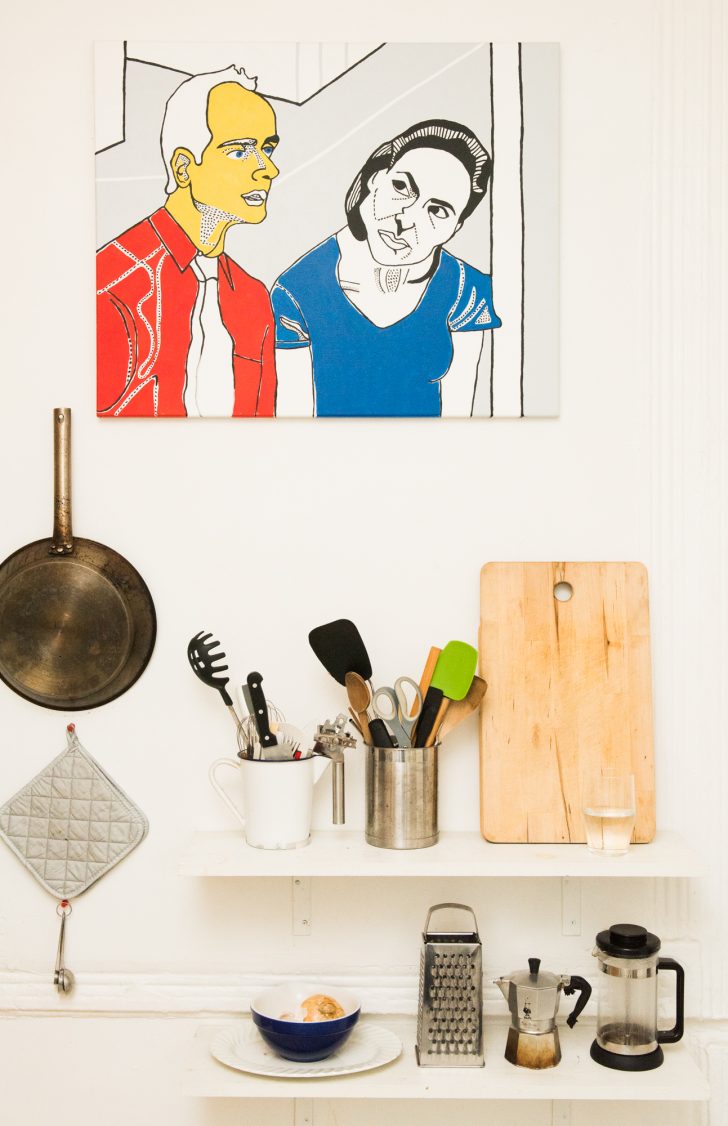 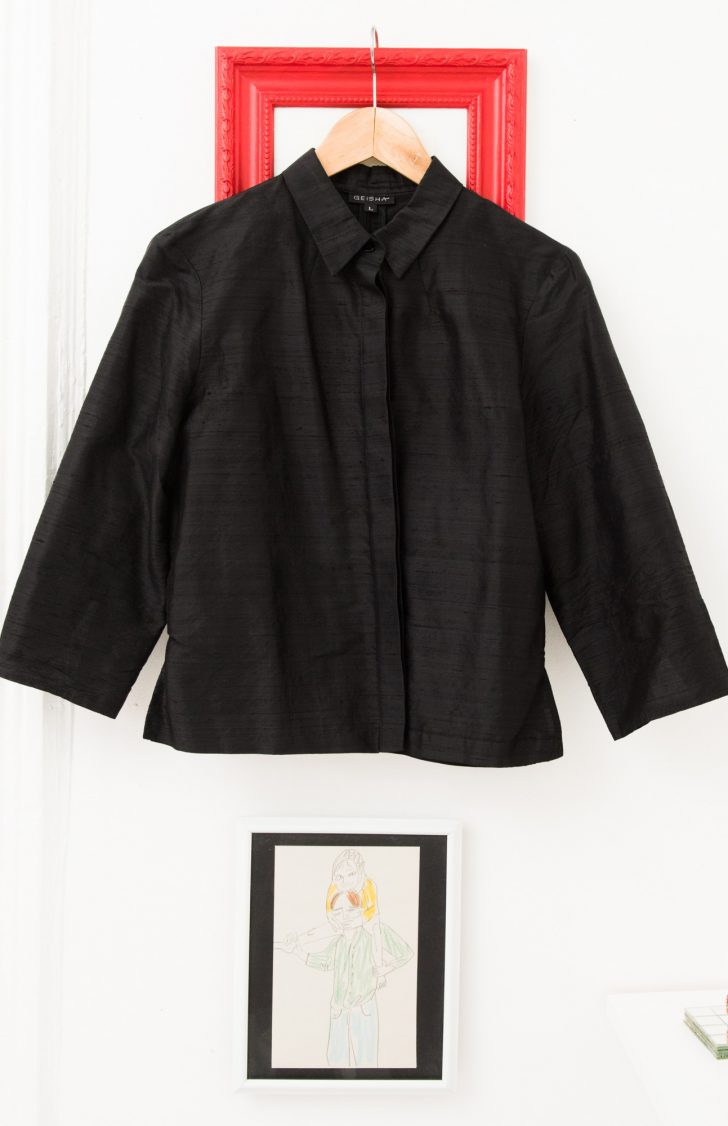 There’s a painter’s equivalent to writer’s block and how she keeps her inspiration alive:

“It is horrible! You can continue to try to make work, but nothing is good, so you are wasting paper or trying to paint over the canvas that you just tried to make a painting on. I went through it for months and months. It was really excruciating.

“For me inspiration is about how happy I am. If I’m feeling really depressed, I can't work. A lot of people say, ‘Oh, channel that into…’ but I can't. That's not how I work.” 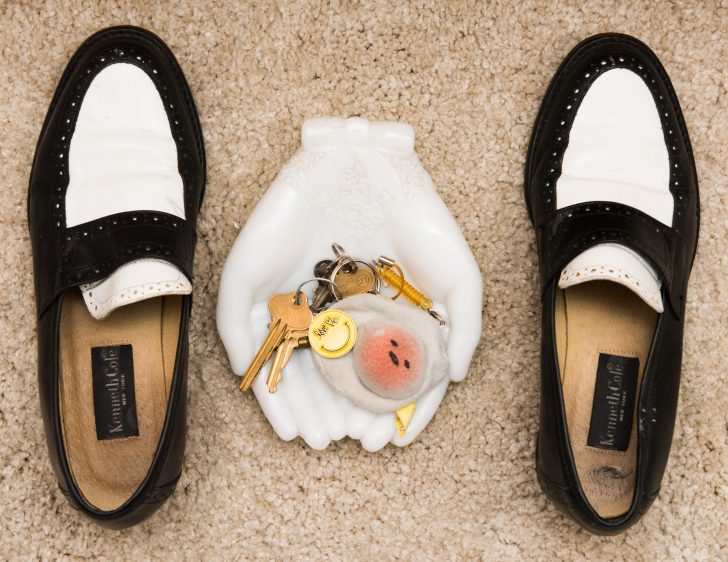 How social media impacts her business:

“It plays a huge part. I am just starting to go to gallery openings and talk to people—I was never comfortable doing that. It is so much easier to reach out to people online and through Instagram. I have made so many connections that way. It can be really, really helpful. But I have since deleted the Instagram app. I still have my account but I'm not on it and I don't follow anyone anymore. It feels so good. I found myself checking it every six minutes. Everyone is so addicted to it. I just don't want to do that anymore. Now, I'll post once every couple weeks. It's like the news section of a website—the new things I’m working on. Look at this! Look at what I made.”

Why she doesn’t want to be defined as a female artist: