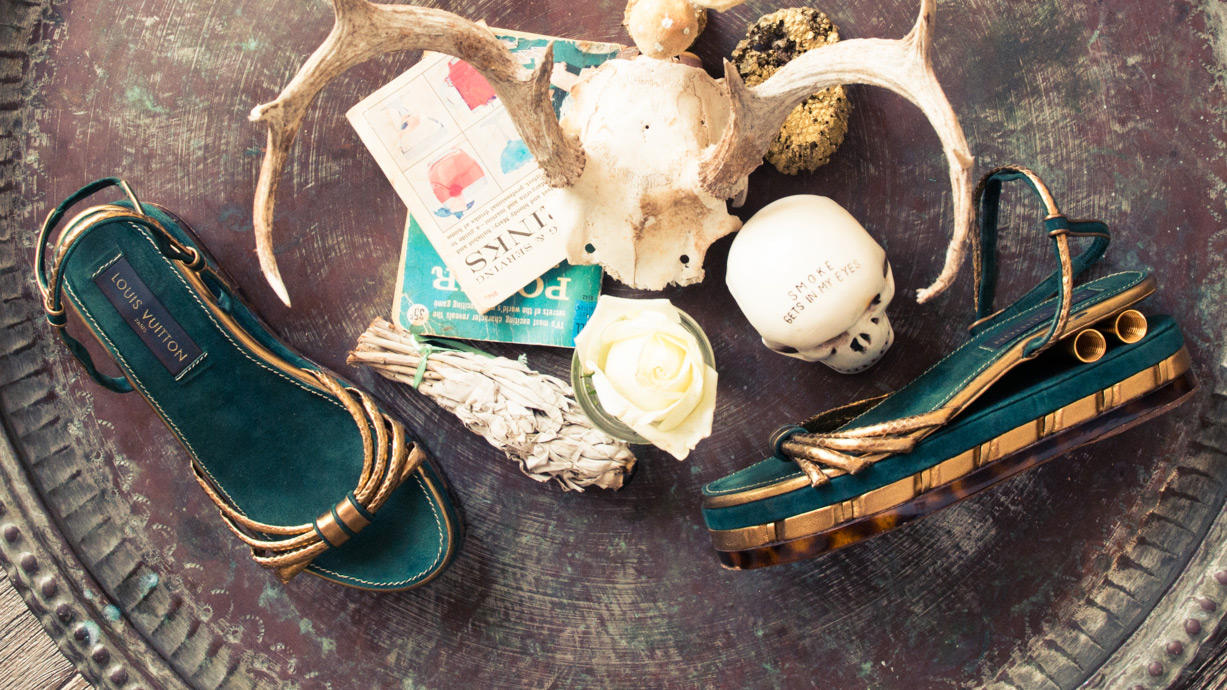 If you’ve picked up sage or crystals for your bookshelf sometime in the past six months, this is for you.

It’s kind of an understatement to say that the relationship between women and witchcraft is a tenuous one. After all, the two go way, waaay back (as in 1500s way back) and the phrase itself has taken on a litany of meanings over the past hundred years (although we don’t think we need to spell out the allegories between literal witch hunts and metaphorical, modern ones).

Even so, general witchiness has evolved out of its less-than-ideal origins. And if you’ve purchased a bundle of sage, cluster of crystals, or deck of tarot cards over the past little while, you can attest to that. (And based on the sheer number we’ve seen in homes we’ve shot in, we’re guessing there’s a likelihood you indeed have). On a personal level, just about every girl (especially the super cool ones) I know have held a fleeting interest in witchcraft—even if it was just whipping out a Ouija board the first time they smoked pot, or something. If you’ve had a watching-The Craft-and-drinking-wine friend night (highly recco’d btw); you probably get it.

But why the sudden interest in all things occult? We emailed a few friends of ours who have held a variety of longtime practices to discuss.

According to stylist Sally Lyndley (who you may remember from this), witchcraft offers an avenue for a lot of us to explore spiritualities that aren’t necessarily tied to the trappings of a traditional church. “I think growing up in strict religion causes a lot of people to embrace spirituality. I think astrology, crystals and smudging gives people practices to create a powerful and happy life, just like church may have done for people in the past,” she explained. Case in point: I was raised in a mostly atheist household, and am usually the token skeptic in any room, but I can easily get into the more ritualistic, calming aspects of something like, say, burning sage (my witch phase in third grade also almost got me suspended from school, but that’s another story, for another day).

That said, the current political and sociocultural climate might have a lot to do with the current uptick in all things mystical and vibe-y, too. “We have violence in the US that we don’t understand—a really scary political situation, lots of questions about women’s rights, and civil rights. In these times, people gravitate toward positive feeling practices like meditation, crystals, smudging and astrology. It gives people hope that shit is gonna be okay,” Lyndley continued. Yeah, we could see how that’s a thing. Rachel Howe, founder of Small Spells, a brand out of Brooklyn that deals with spiritual healing through the arts (they also have mean tarot card sets up for grabs), echoed Lyndley here. “People are feeling a real desire for more empowerment, and more self-love, especially women. There's so much coming to the surface now about how all kinds of people are marginalized and made powerless in their lives, and mysticism holds some answers about how to reclaim some of that, without needing to hand over further power to others.”

Jaspre Guest, the PR pro behind Noise 784 (they just launched their own emojis), thinks the whole thing’s been enabled by social media. “People in general are more open minded and the internet has allowed for curiosity seekers to find answers. It used to be literally word of mouth, now you can search from a hashtag. Everyone is looking for magic. You want to feel like there is a deeper universal meaning to your life.”

Yep, it’s a thing. But why the link between the worlds of fashion and spiritualism (aside from the obviously amazing Stevie Nicks-ish dressing opportunities)?

“I know loads of fashion people—designers, hair stylists, stylists, models—who embrace mysticism, astrology and crystals as part of their everyday life,” Lyndley agreed. “Fashion is a very open minded community. I think mysticism and this new way of embracing spirituality allows fashion people, and people in general, to feel in control of their lives and minds.” In other words, it helps them find control in an industry that moves at breakneck speeds, and is often void of it. Guest points to the idea that creatives are quicker to go with their gut, “They're happy to create and they deal with their instincts on a daily basis. They default to feeling and intuition rather than thinking. Creatives are more open to intangible ideas and the unknown because their lives are unpredictable.”

Howe agrees—and is quick to call out the aesthetic alignment, too. “Fashion has a crossover because there's some similarities with self-improvement and appreciation of beauty, and with the idea of the surface holding some indication about what's underneath, the outside reflecting what's inside.” She continued, “style and aesthetics, similar to mysticism, is about communicating something deeper through visuals and symbols, and using intention.” In fact, Howe went so far as to say that fashion-y types are quicker to take to some spiritual practices, too. “I'm finding a lot of fashion people are interested in working with me with tarot, and there's an easy flow to it when we do, because they understand the power of symbolism”.

WHAT IT HAS TO DO WITH FEMINISM

Bakara Wintner of Everyday Magic in North Carolina is quick to point to witchcraft’s historical connotations in explaining it’s recent-ish upswing in practice. “Historically, women were called witches for being powerful in any way that society deemed unacceptable. I believe that the resurgence of magic, specifically for women, is actually a way of reclaiming personal power and the right to be powerful.” And about that whole teen witch thing? “In a generation that grew up on Harry Potter, Sabrina the Teenage Witch, Charmed, The Craft, The Lion The Witch and The Wardrobe, Matilda, etc., the longing for magic has been ingrained in us since we were very young. It only makes sense that people are reaching for it now in these more tangible ways,” Wintner explained. 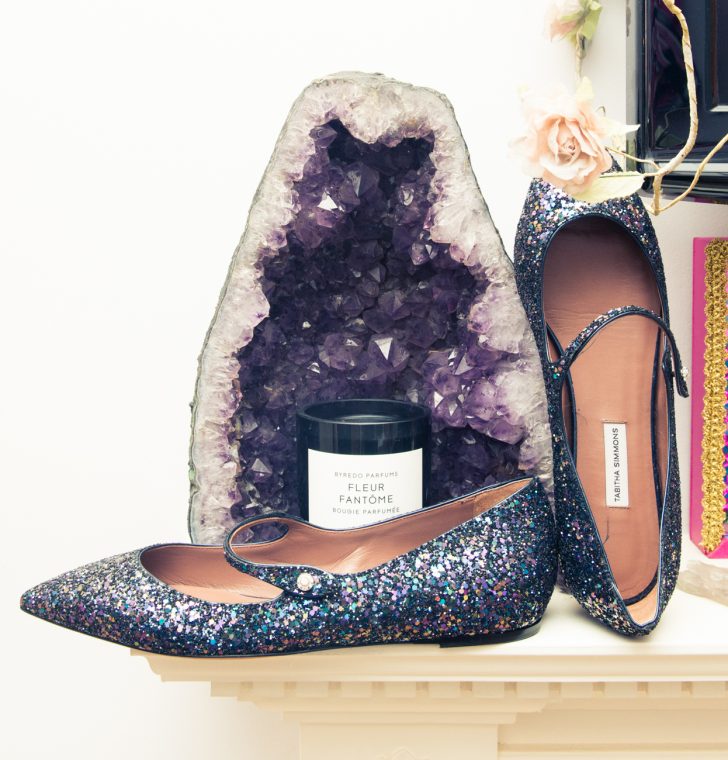 About the whole crystal thing—they’re fucking everywhere. Including our desks. So why now (again, aside from the fact that they’re pretty)? As Kylie Jenner's crystal healer, Katie Manzella told us, “the energies [in crystals] can heal, uplift and inspire us along our journey as we manifest all of our true heart's’ desires.” In other words? People can “wear a crystal and feel like they are in control of their thoughts and their life,” explained Lyndley. (Full disclosure: despite said skepticism of, oh, everything, I picked one up at Toronto’s best kombucha spot—fittingly named Witches’ Brew—to keep in my bag. Who the hell am I, even? Is this what a quarter life crisis feels like? Please advise.)

Sally even goes so far as to bring them to work. “Different crystals are scattered all over my house and studio. I even have two crystal grids in my styling kit that I always take to work; one for creativity, and one for calming and positive energy. I try to meditate every day and I have different palm stone crystals to hold based on how I’m feeling,” Lyndley continued.

Before you go ahead and drop your paychecks on quartz (because crystals, while beautiful, are expensive AFFFF), though, Howe cautions, “you could fill your house with crystals but if you're unclear on your intentions, it won't do any good for you. Being more connected, tuned in, aligned, this is the work that we need to do on a daily basis, and the mystical tools are there to help.”

Seen bundles of this guy around your friends apartments and wondered WTF they’re onto? As Lyndley explained of her personal ritual, “Every morning I smudge the house and when I get to the studio. I like burning sage once a week and doing palo santo sticks daily. The smudging just kinda resets my brain for the day, like a palate cleansing, a reminder that I am in control of my mind and my day and how I react to things.” 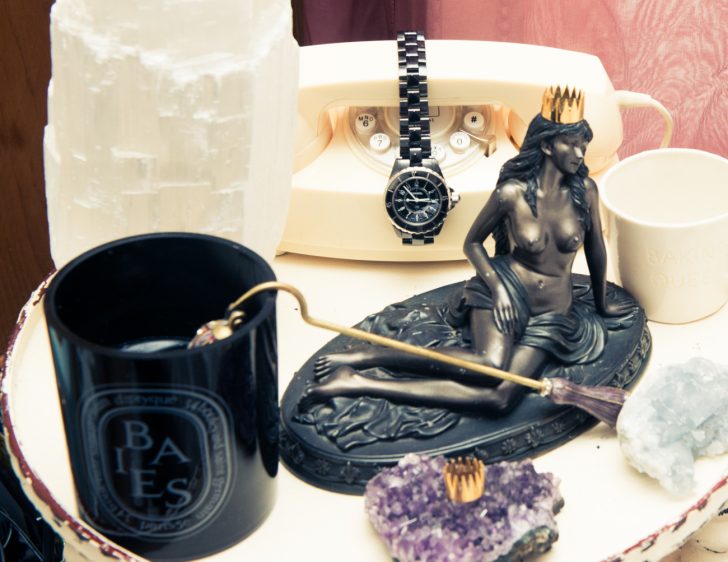 Turns out we’re not alone in letting the stars dictate everything from our nails to when we sign important work documents. “I love astrology. I find that I work or get along better with certain signs more than others,” Sally added.

Think of astrology as dipping your toe into the pool that is mysticism. After all, it’s pretty much everywhere—your mom probably sends you your horoscope from time-to-time. But some people go a little harder than others in that department. Lyndley shared, “a stylist I worked with years ago was really into numerology and astrology. When I worked with him on shows, the number of looks for the runway show had to coincide with his idea of ‘good’ numerology. And he would pick the team to work with him based on people’s astrology sign.”

So where would an aspiring witch hypothetically start? As per Howe’s experience, “follow what is calling to you. I started with yoga and reiki, these are accessible and available. Trust your own sense of where you need to go, and what you need to do next. The path to mysticism is one of your own healing, so let it take whatever form it needs to.” If your path involves, well, crystals, look no further than Lyndley’s little black book. “I love Energy Muse! They are my crystal ladies, and loads of famous and successful people's crystal ladies, too. I did a love ritual from them two years ago and I met the man of my dreams. They know astrology, crystals, feng shui—all of it!” Guest added, “Spellbound Sky is my absolute favorite crystal shop on the planet. The owners, Mark and Martin not only have vast knowledge, but an enthusiasm that is contagious. If you are ever in Los Angeles, this is the must stop.”

Ultimately, whether you find yourself in the deep end of Stevie Nicks brand of spirituality, or on the cautiously optimistic side of things; if we can leave you with one parting piece of advice (by which we mean, one by way of Howe), it’s this: “it’s important to remember that the crystals, the astrology, the sage; they are all tools for magic, but they are not the things that create the magic, you are.” Amen, sister .