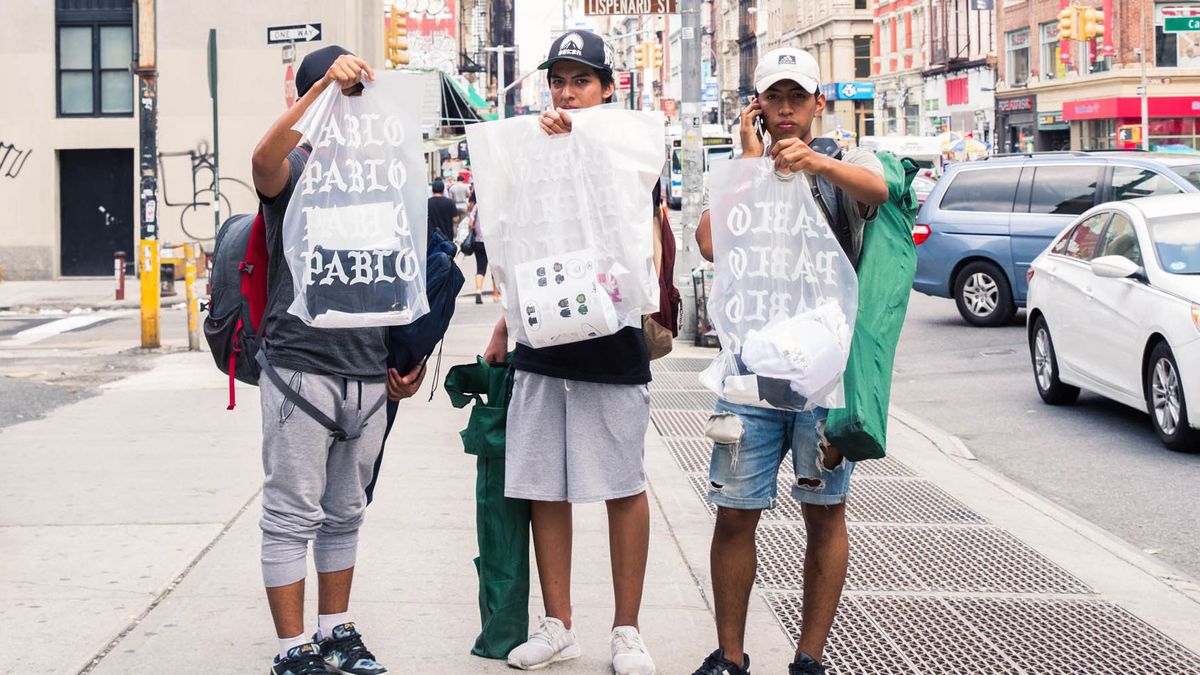 A Complete History of Streetwear Fonts

Here’s something you probably didn’t know; where exactly that Thrasher logo came from that’s strewn across practically everyone’s chest. Or who designed the font for the Pablo merch people line up for, for like, 15 hours to get their hands on. Sometimes we like to teach you a thing or two in the middle of the week. It’s good for the brain. Plus, this shit is also totally fascinating. So without further ado, consider this your streetwear-label-font history lesson.

Typeface: Futura Bold Italic
Established: (More like inspired by—depending on who you ask) artist Barbara Kruger, who used the font on top of block text in her work since 1979. Which was then, reimagined ~slightly~ by Supreme since 1994.
The 101: Here’s the thing, the story of this font’s provenance is a murky one. The Sparknotes version: Supreme admitted to using Kruger’s font, recognizable by its typeface over text block format, in a legal document. But it’s not really what you think: Kruger wasn’t taking them to court. It was sighted in a copyright infringement court document in the case of Supreme vs Leah McSweeney of the brand, Married to The Mob, for McSweeney’s “Supreme Bitch” parodical merch. A rocky past, but now you know.

Typeface: Gothic Typeface
Established: By Cali Thornhill DeWitt, writer/designer/DJ/photographer/artist and all around multihyphenate, who designed the gothic typeface for Kanye’s The Life of Pablo merch.
The 101: So why exactly does Kanye get emotional over fonts? We’re not totally sure, but Cali DeWitt’s designs were spotted on Saint Pablo himself well before, well, Pablo merch existed. DeWitt has an interesting backstory himself, like how he was a roadie for Courtney Love and her band Hole back in the ‘90s; appeared in drag on Nirvana’s In Utero album art, and a decade later started a record label called Teenage Teardrops, and finally, cofounded Hope Gallery in 2008. But when it came down to taking credit for what’s likely his most seen works, he didn’t admit to designing the script for almost a year. Respect.

Typeface: Banco
Established: In 1951 by French typographist Roger Excoffon.
The 101: Unlike Supreme, there’s no beef here. Excoffon’s typeface, Branco (he also notably created Mystral, Antique Olive and Choc), which was considered tacky amongst fellow typographists, has long emblazoned the windows of butcher shops, hair salons, and bookstores in Europe. It pretty much grew stale, until a little somebody by the name of Bob Marley used the font for his Natty Dread album in 1974 and made it cool again. It then became infinitely cooler in 1981, when skateboard magazine, Thrasher, created by Eric Swenson, Fausto Vitello, and Kevin Thatcher took hold of the font and used it to outfit skate rats. Fast forward to *right now* and practically every fashion person has worn some version of Thrasher (or Thrasher as told by Vetements) gear. Hardcore.