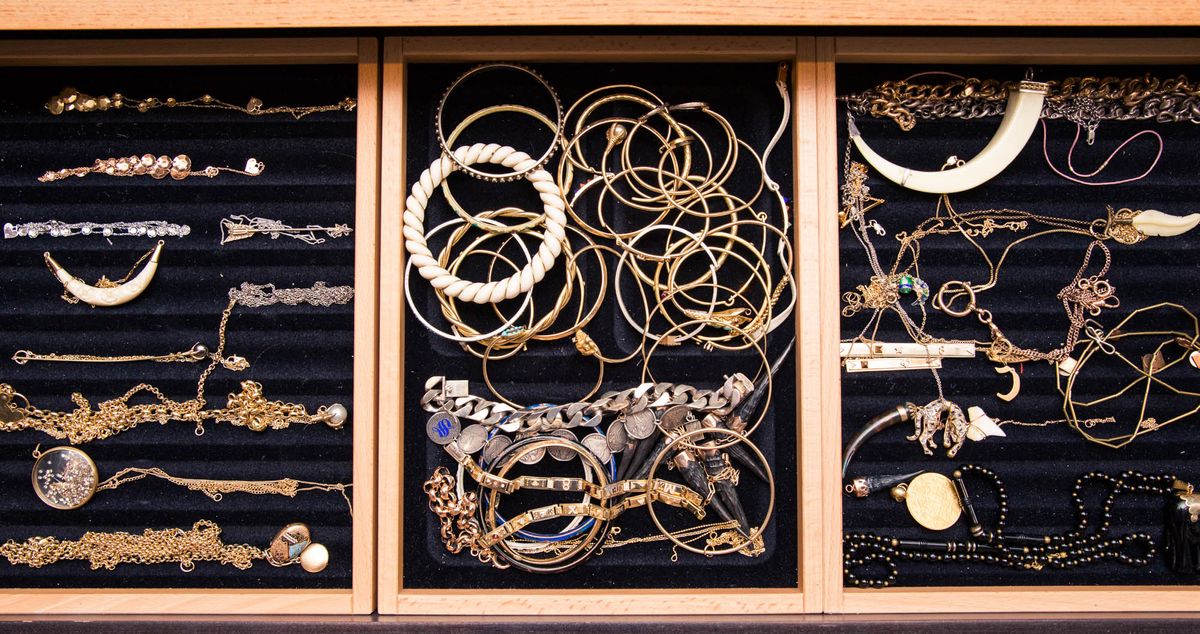 While admittedly there are many over the top items on our fantasy wish list, at the absolute very top is a full suite from Foundrae. If the name doesn’t ring a bell, the designs themselves likely will, given that they’ve been popping up all over Instagram for the last couple of years and are so distinctive. If you ever thought inspirational jewelry was categorically cheesy, please allow me to inform you that you are incorrect.

The line, designed by former Rebecca Taylor CEO, Beth Bugdaycay, is so chic, while also featuring subtle hints at values (like strength, good karma, and wholeness) she’d like the wearer to keep in mind and pass down to future generations. “I’m hoping to inspire people, and hope that I can be a part of what they end up adopting as their own family values,” she says. And while she has the actual designs and the idea behind the line down pat, starting the company wasn’t without a solid dose of fear and self doubt (which we could barely believe because look at this stuff, it’s so good!), “The very first ring we did was ‘strength’,” she says. “It says Fuerza on it, and I made it because, oh my gosh, I needed it. I wear it every day and I was scared. But I just dove in—that’s the only way I’ve ever known.”

From the rings to the charms to the earrings, Bugdaycay is making exactly the kind of feel-good, wear-forever, then-pass-it-on, substantial jewelry we’re craving. And we’d be lying if we said we weren’t saving all our pennies to invest in a piece for ourselves. Here’s how she “dove in” and followed her passion.

How she got the idea from her grandfather:

“[I’m really inspired by this book, which] shows our family crest [and the whole thing was done by our Grandfather—it’s like a big family tree], and it’s incredible because we have every ancestor written down since the 1200’s.

“[The crest] makes me sound like I’m royalty and I’m not, but the idea is that my family has this treasure. Honestly, everybody has this in their family, it’s just not recorded. In my family, it was really important to record everything, and growing up it was such a gift [to know this history]. I wanted to be able to give that back to other people that don’t have it. They’re creating their own kind of modern heirlooms to give to their future generations.”

What that original inspiration turned into:

“But really the idea is more about values. I wanted to be able to inspire people.The idea is that there are five groups: karma, strength, protection, dream, and wholeness. There are symbols for each one of these that represent those ideas. I’m hoping to inspire people, and hope that I can be a part of what they end up adopting as their own family values. We don’t think anybody is going to be wearing exclusively Foundrae or anything, but we just want to be part of their story, and part of the journey, and hopefully inspire the next chapter. That’s what we’re after.”

“I like to have real conversations with people and maybe that’s kind of intense. But working with jewelry immediately gives you that kind of conversation that I really like to have.”

What she loves about jewelry:

“Think about this: you’re in a person’s house. But the most personal thing that really speaks to their character and their past is their jewelry drawer. You can get to know them so well by asking them questions about their jewelry. You can see milestones. Maybe they got the diamond earrings when they graduated, or their mom gave them this tiny little baby ring when they were little, then they start talking about people they met, their loved ones, whose initials they chose for a locket, or their great aunt who gave them something, and they always loved her because she was such an individualist. I like to have real conversations with people and maybe that’s kind of intense. But working with jewelry immediately gives you that kind of conversation that I really like to have. I want to know how you and your husband met and how I’m really glad I got to know you so well today. I actually really like getting to know people.”

The first steps to making a big jump:

“I’ve always been obsessed with jewelry, and when I first started, I would change vintage jewelry so that it suited me more. [At one point] I realized how much I loved doing it, so then I started talking about it with Rebecca [Taylor]. I’d say, ‘You know, I think I’m going to start a jewelry brand somebody.’ She would always say I should. It was when I was with Murat, [my husband] in the Hamptons once, about a year ago—I had just re-signed another three year contract with the people that bought Rebecca Taylor to stay on as the CEO. A month after I had re-signed that, I said to Murat, ‘I think I want to start the jewelry line,’ and he said, ‘When are you going to do it?’ And I said, ‘I guess I have to do it at the end of the three years now, because I just signed this thing.’ And he goes, ‘Well if you’re going to do it, you might as well just do it now.’ So literally the next week, I quit.”

“In order for me to do this, I just have to dive. So that’s what I did, I dove. I lost so much weight at first, and that’s when you realize you’re so stressed, when you see physical changes.”

Being scared to take the leap (and then doing it anyway!):

“It was so scary—the very first ring we did was ‘strength’. It says ‘Fuerza’ on it. And I made it because, oh my gosh, I needed it. I wear it every day and I was scared. But I just dove in—that’s the only way I’ve ever known. I actually don’t like change that much, I’m a Virgo, I like things orderly, but then in order for me to do this, I just have to dive. So that’s what I did, I dove. I lost so much weight at first, and that’s when you realize you’re so stressed, when you see physical changes. There was a period when I couldn’t even get out of bed for three days.”

Getting over that fear:

“My husband was so kind to me. That was in December 2014, and it was my last week at Rebecca Taylor. Rebecca and I were inseparable, so the fact that I was leaving was really weird for everybody. I was supposed to stay another week but then all of a sudden I just called Rebecca and said, ‘I have vertigo.’ And I never get vertigo, it’s just something that doesn't happen to me and Rebecca goes, ‘You know what, just stay home Beth. Stay home.’ I couldn’t get out of bed for like three days. I had never [dealt with anxiety] in my life, that was a new experience for me.

“The first couple of months it was so exciting, and then all of the sudden there I was, really not going to work anymore. I told my family I was sick, but my husband knew what was going on. I wouldn’t answer my phone either and I’m usually pretty present. He came into the room one day and he goes, ‘Baby, you dove. Now swim.’ That literally got me out of bed. I thought, ‘Okay, swim.’ I would have to say that to myself a lot. Swim..”

On finding your niche:

“The very first step was saying, ‘I’m leaving Rebecca Taylor and I’m going to start a line’. Just saying, ’Okay, I’m going to do this,’ took a lot of courage for me. A lot of courage. The actual designing process came fast and easily. I had so much inside me that I wanted to say, that the actual real problem was editing it down into a cohesive collection. Making it cohesive and curating it, and making it understandable for people. First it came out just like a jumble, but anyone I’ve known my whole life, they feel like this reflects me.

“You try to think, okay, what do I love? I happen to be crazy about enamel. It’s something that I have always, always been crazy about. I like color! So the idea of incorporating color into the jewelry was important from the beginning.”

The moments where it all comes together:

“I still [sometimes] feel like, is it happening? I think people like it a lot, but I’m still doubting myself as a designer. Welcome to the world of being a designer! All you do is doubt yourself [laughs], because there is no right answer, so you’re constantly fooling around and stuff. Basically, I tell people that I work with now, that I’ll just do anything I can to just keep on making something. I just want to make things. I really do. I feel so lucky that I can, and then when somebody says on Instagram, ‘I love this line’, you just feel like saying, ‘Thank you!’ I feel so grateful.”

Her advice for starting a jewelry line:

“I think that you just have to start. That’s the reality. Even if it’s just for yourself or you make something every once in awhile. I’ve always felt that there is never a perfect time to start and there are never the perfect circumstances, ever. You need to just do the thing you love. You have to do it until you can start devoting more and more time to that passion and making it viable. I really believe in that. what’s the point of having a dream if you don’t actually do anything about it? No matter how small the step is, you have to take it.”

Jewelry
More From the series Career