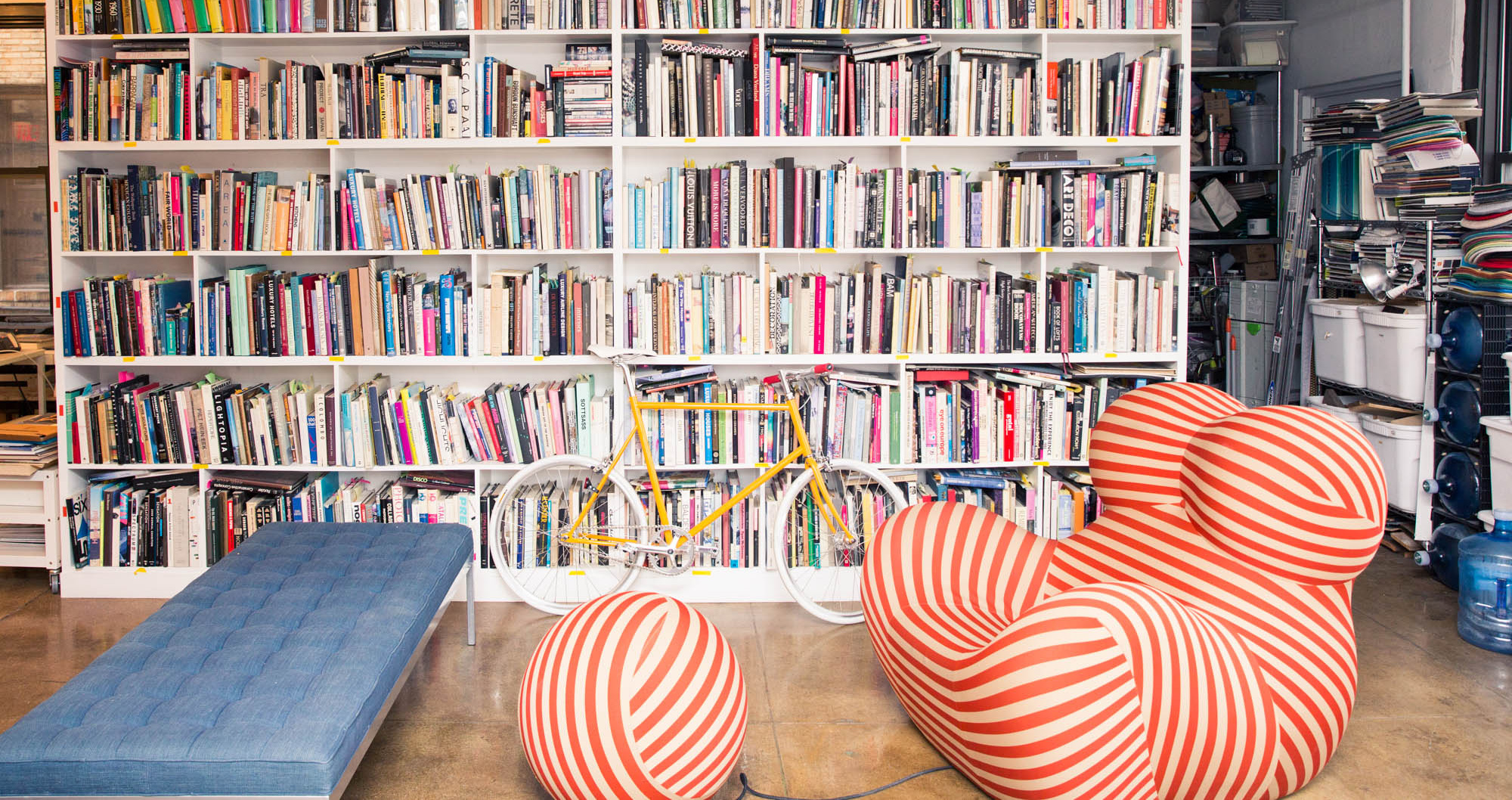 You remember a Marc Jacobs show. You remember seasons and collections definitively: the Diana Vreeland collection; the black and white mod collection; the surfer-skater-baroque mashup collection. The clothes are always great. (We’re pretty excited to see the collection today if that wasn’t obvious.) But you also remember the sets at the shows—sometimes (dare we say it?) even more than we do the clothes themselves. Or perhaps it’s more accurate to say you remember the atmosphere, the show as a whole, which, when you’re making sets as elaborate as Marc Jacobs’ (the pink house that went with his army collection; the Ziegfeld for his ‘One Night Only’ show; the dazzling clouds that filled the space for his serene tank dresses and cotton candy fur), is probably the whole point anyway.

And Jacobs trusts one collaborator when it comes to these sets: the one and only Stefan Beckman, who also makes sets for Alexander Wang and Balenciaga campaigns, and works regularly with the likes of Steven Meisel and T magazine. In other words, he’s the very best at what he does: making the fantastical locations dreamt up by designers like Jacobs, editors, and Beckman himself, a reality for the length of a photoshoot or an event or a show.

We met with Beckman (who is the kind of expressive and totally captivating guy you could sit and talk to for hours) to photograph him with a pair of massive prop scissors, explore his Chelsea studio (packed full of cataloged art books that bare the tagged evidence of being constantly referenced), and talk about, well, him a week before New York Fashion Week started in earnest. His studio was in the midst of approving color prints for the Coach show (another Beckman special), and it was about twelve days out from Marc Jacobs’ Hammerstein Ballroom extravaganza. Beckman had yet to hear many details about the show (they were “working on it”), but to hear him tell it, this was business as usual. This is what fashion week is like for the industry’s most in demand set designer. 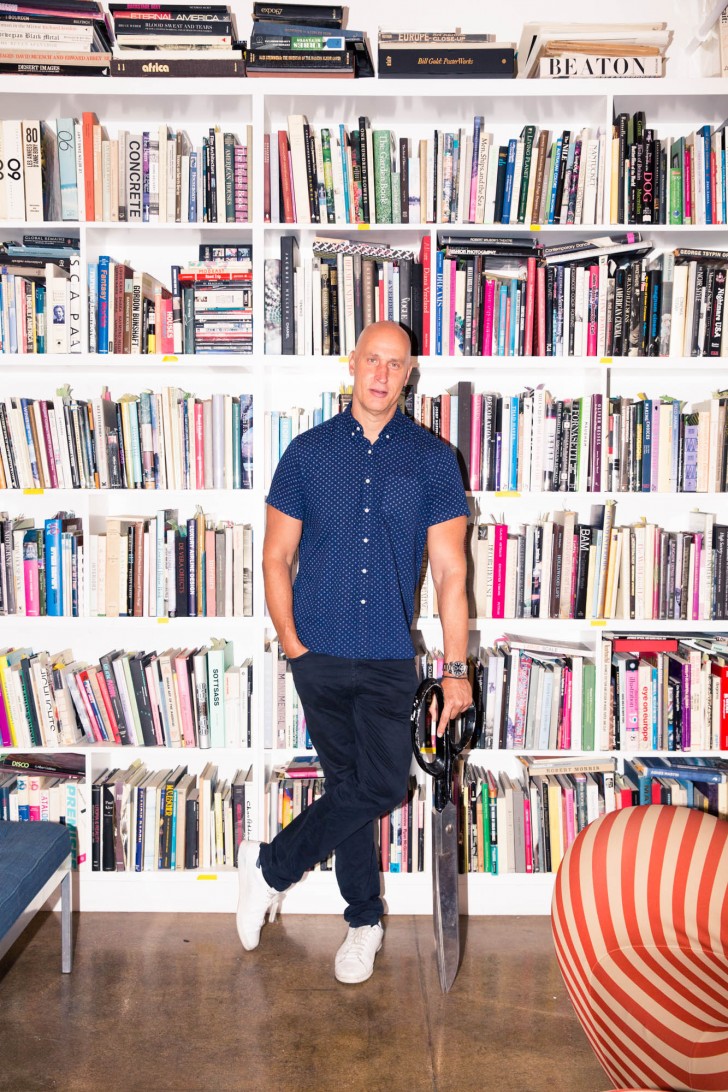 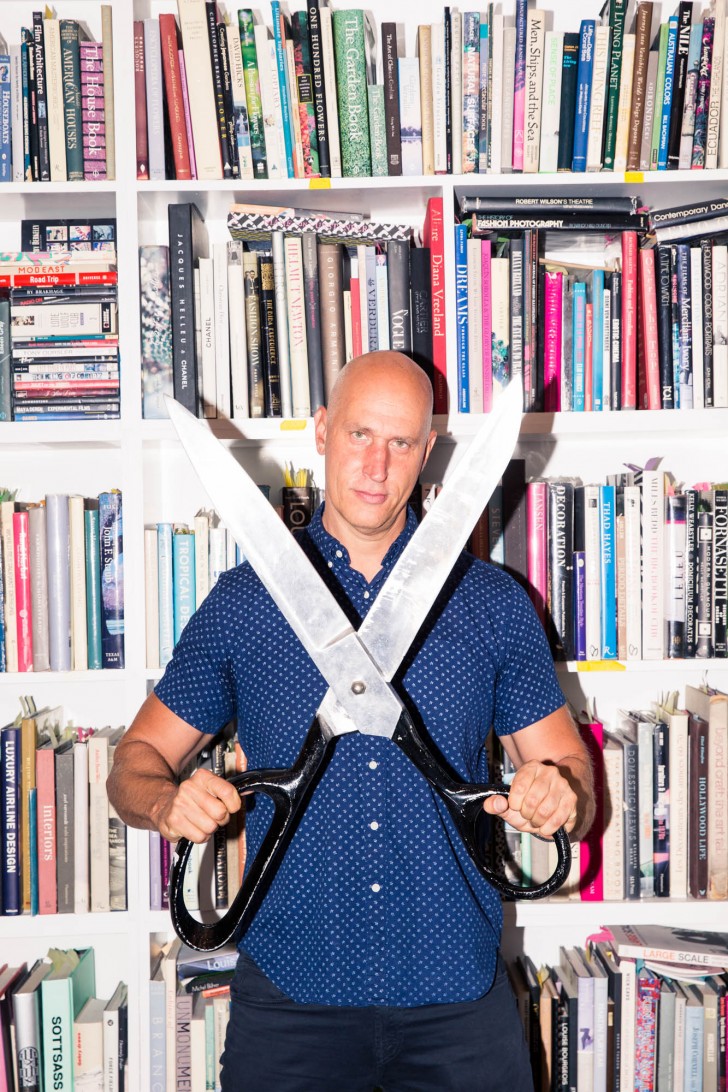 How he got into set design to begin with (and how Steven Meisel is involved):

“I had wanted to live in New York my whole life. I moved here with my best friend on a whim. And then I was lucky that I just met another fashion stylist. I had worked on TV, movies and pilots [in L.A.], but I wasn’t part of a union. It was fine in L.A.—you could get work, but in New York it's very union centric, so I didn't really know what I was going to do. I started working on shoots as an assistant and then I just started meeting people. I waited tables for a few years, but my first job in the business was returning props for a Cool Whip commercial. Then I started working and met my best friend who is now my agent—she was just starting her business—and I had a good friend who worked at Harper's Bazaar back then and that's when Liz [Tilberis] and Fabien [Baron] were there—that was a great time. I work with Fabien still. It was the mid to late ‘90s and a really good time in fashion. There weren't a lot of people doing what I was doing to be honest.

“I did a story for the T magazine actually, with Michelangelo Di Battista, and it was super creative with with Erin O'Connor. Steven Meisel saw it in the magazine and they called me in for a meeting and then I started working with him. It's amazing how it just happened.” 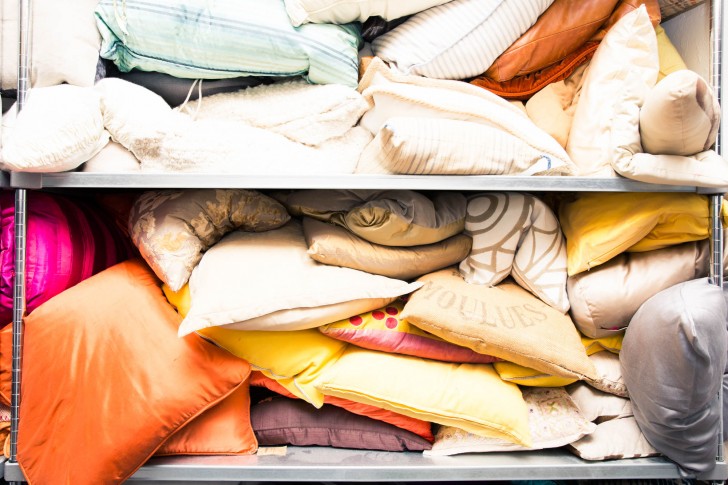 How he started designing sets for Marc Jacobs’ shows:

“My first show was around 2005, 2004 in New York and then by this point I'd worked a lot—on hundreds of shoots: campaigns, fashion editorials for all the magazines. I had worked with a lot of great people by then. I was recommended [to Marc Jacobs]. He wanted to do a set, and it was literally like five days before the show. I met with Mark and started working on it, which was awesome. It was a completely different experience doing a show. I had been to fashion shows, but just the process of working with different teams. It's not like a shoot where you're working with the photographer and hair and makeup—here you're working with giant crews: a lighting director and all their people and sound and construction crews. It's much more like theater. It's so many layers and it all fits together and works as a production. That was the biggest education to be able to do something on a huge scale. Then the New York Times gave the show an amazing review—you really realize the power of what a fashion show could really do.” 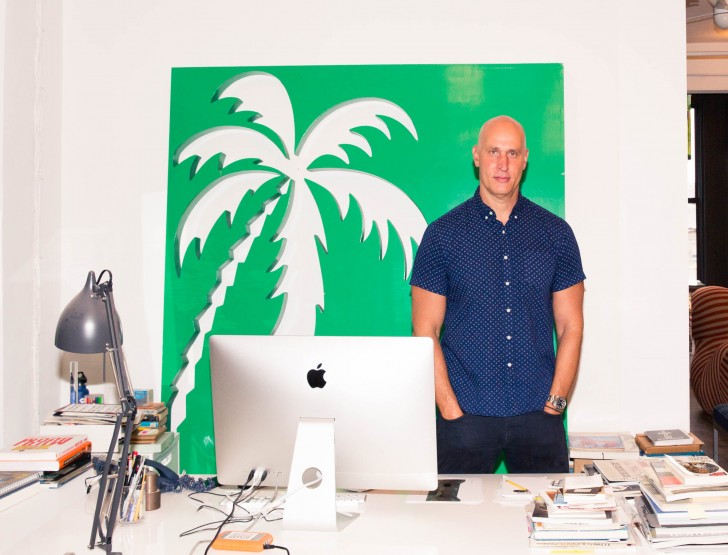 The process of designing a set:

“For me, a visual library is like very important to get the ball rolling because you're working with visual people, so you're able to show them a picture or a film still or a piece of artwork as a starting point. The scale is much bigger for a show, and with the show you have more time than on editorial. With editorial, you have to be really quick—you have to have a lot in your back pocket because if something's not working, you have to be able to be like, what about this?”

A week before fashion week, this is what’s happening:

“We're building the Coach set right now. We have crews that who like all of our shows for us. But on an editorial shoot I'm there putting up the thing and moving stuff quickly—on set especially, I get my hands on moving in the furniture. For the shows we're dealing with giant scenery—I might place things but I have other people help me.” 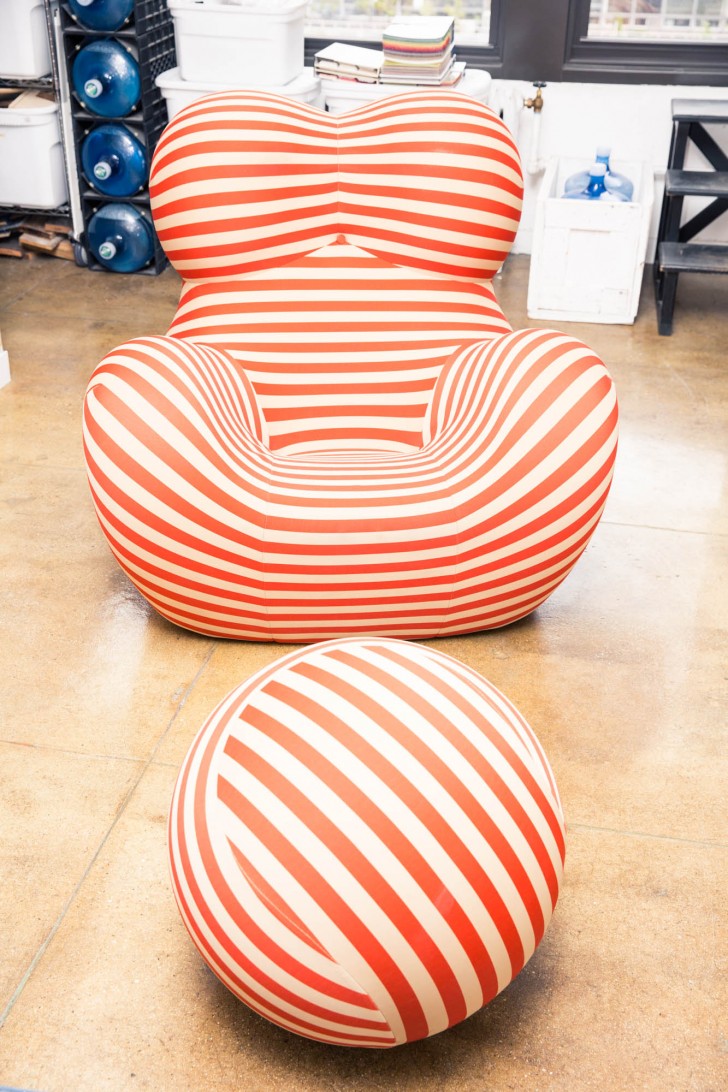 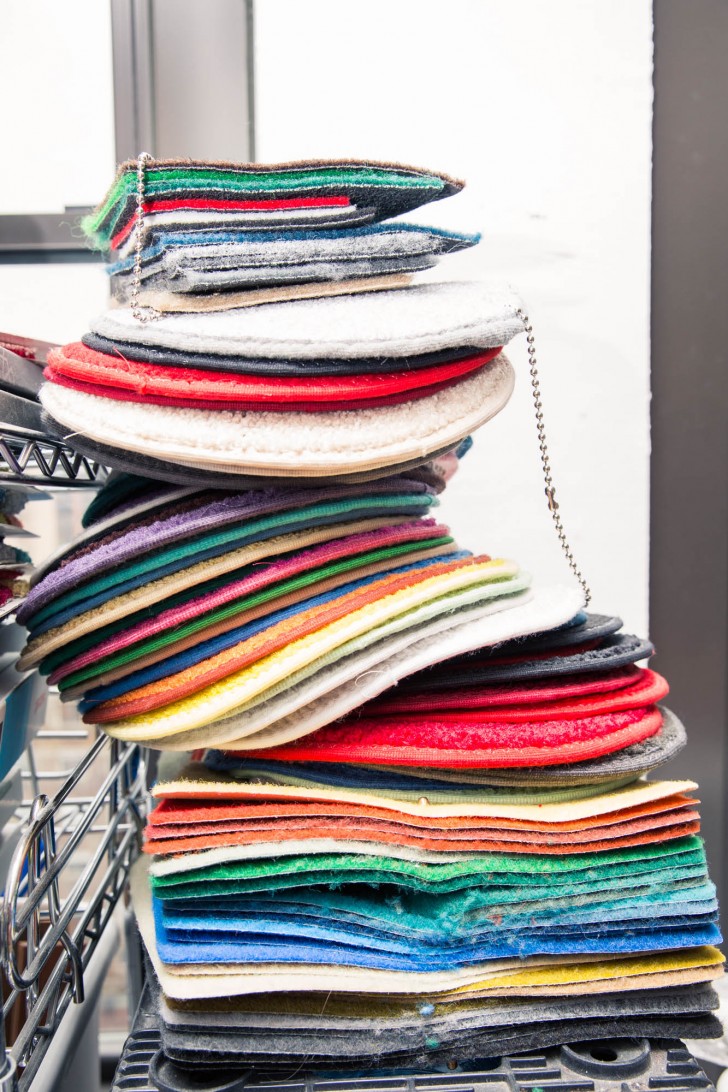 How the (emotional) process works with Marc:

“Usually it just starts as an idea. It could be the antithesis of where we were last season or it could start one way and end up completely different, which has happened a couple times. We have literally developed an idea and even started building it and then he has a change of heart—but it’s for the right reasons. You look back and he is so spot-on—he's really smart. Everything's down to the wire, but because we’re down to the wire, what you're doing really makes sense. Either it's really integrated with what the clothes are, or it could be something that just sets the clothes off, like last season. It could be something that's really, really simple, which is what the clothes needed. Because, at the end of the day it's about the clothes—maybe you need to take a step back and take things away and edit. A good set can be super minimal or it could be super lively.

“The sets that people responded to the most from Marc are just really simple graphic sets. Like the pink house or like last season when we did the white lacquer room. People really responded to that. But then we did the Victorian surf, which was like this big mess of a thing and was emotionally… there's been a couple sets that we've done that literally I started crying at the end. When I talk about it I tear up—it's a good thing. It was so much energy put into that. And the Diana Vreeland inspired the room was one of those. I spent so much time—it was crazy.” 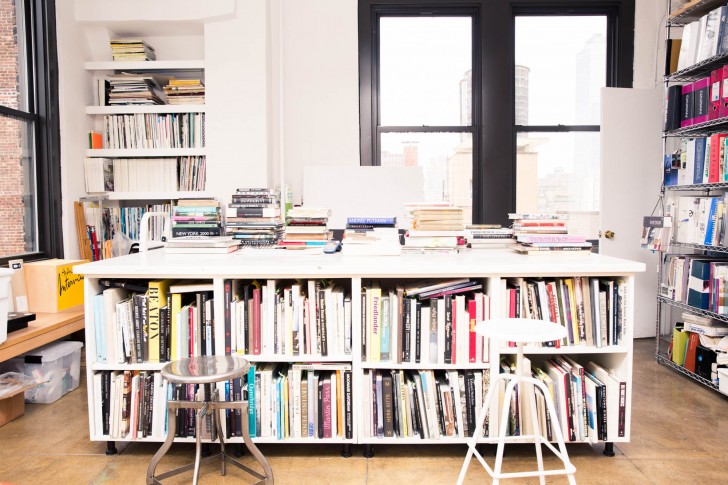 And then the show starts (and so do the Instagrams):

Does he actually take that Instagrammable moment into account when he’s designing?

“For sure. It's become really really important, but you don't want to design just for that. I think it's the wrong approach to be like, this is going to make a great Instagram, so I'm going to design this set. But it's part of it, for sure.” 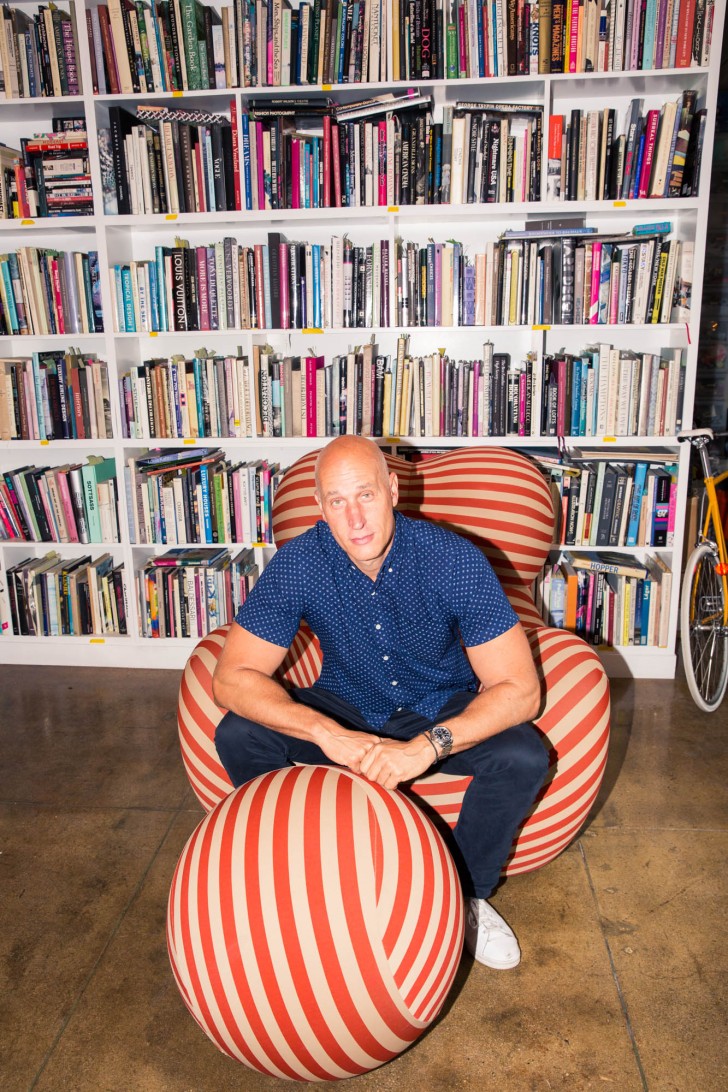 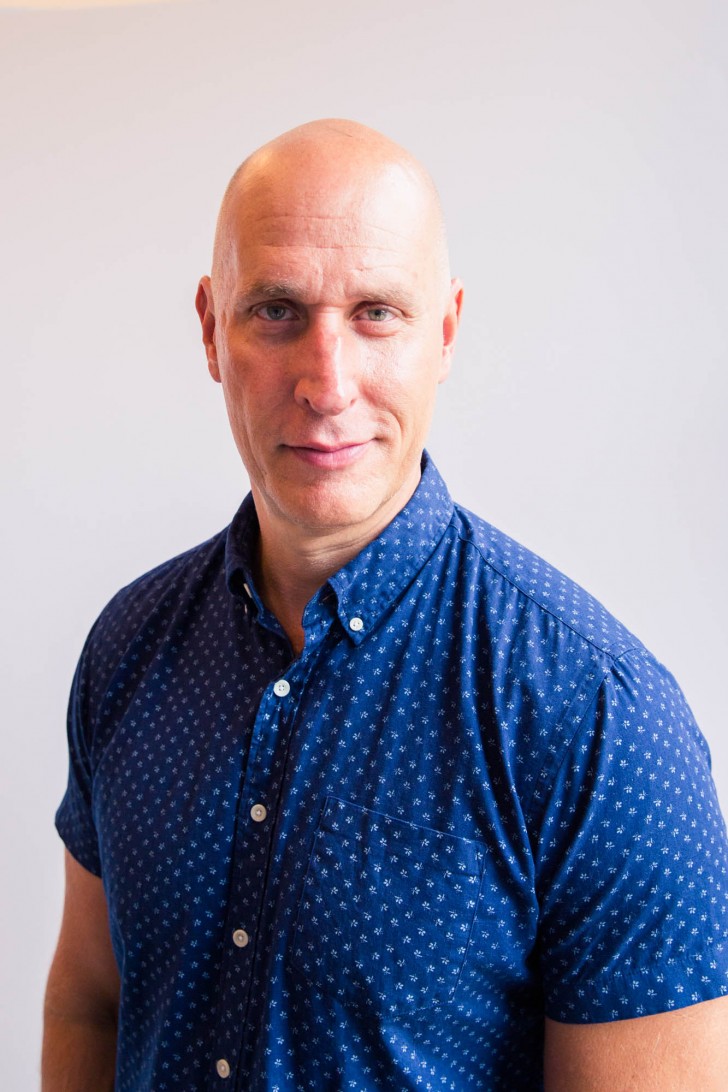 When it’s not fashion week...

“...We're doing shoots, campaigns, commercials, usually fashion-based. And we do all the special effects for these shoots, if we're doing rain on a shoot or anything, it's all under our department’s jurisdiction. Smoke, fire.. It's always different.”

“If I'm on a shoot I usually go straight to set, have breakfast on set. And then we'll be either building or we'll be shooting or pre-lighting, depending on what stage we’re at. If we're in show mode like now, we're not really doing shoots. I'll have like meeting after meeting, call after call. We'll do site visits, I'll do meetings with the designers looking over test prints. And revising drawings. Mostly a lot of meetings—I've had meetings every single night this week until 10 o’clock at night. During fashion week I work all hours.” 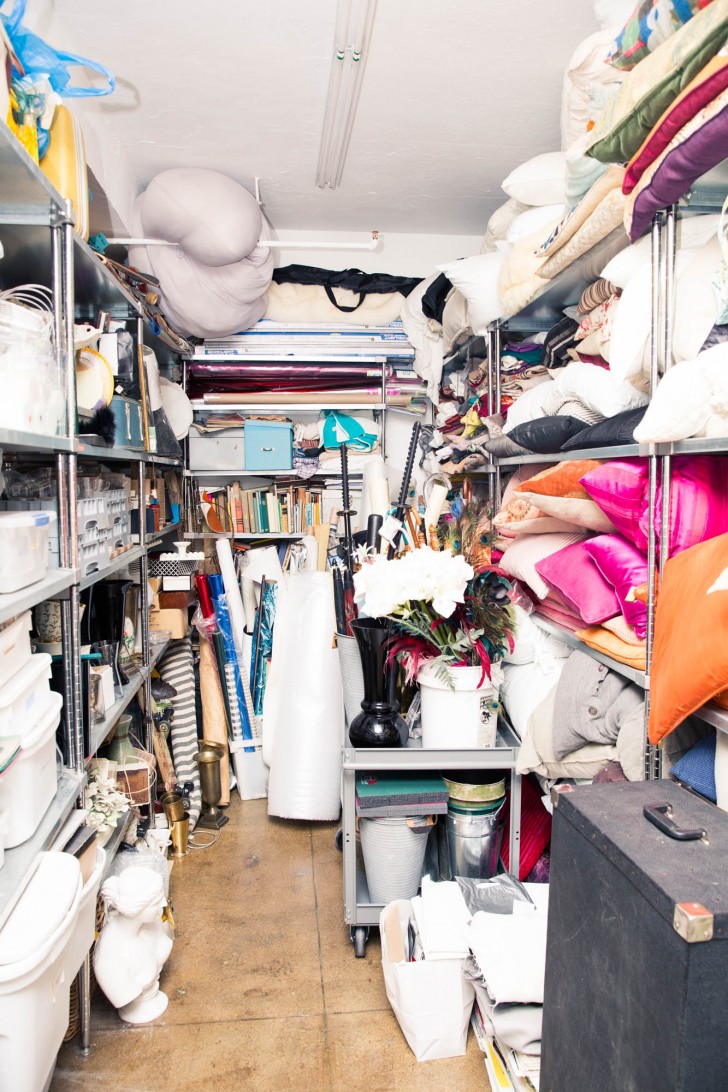 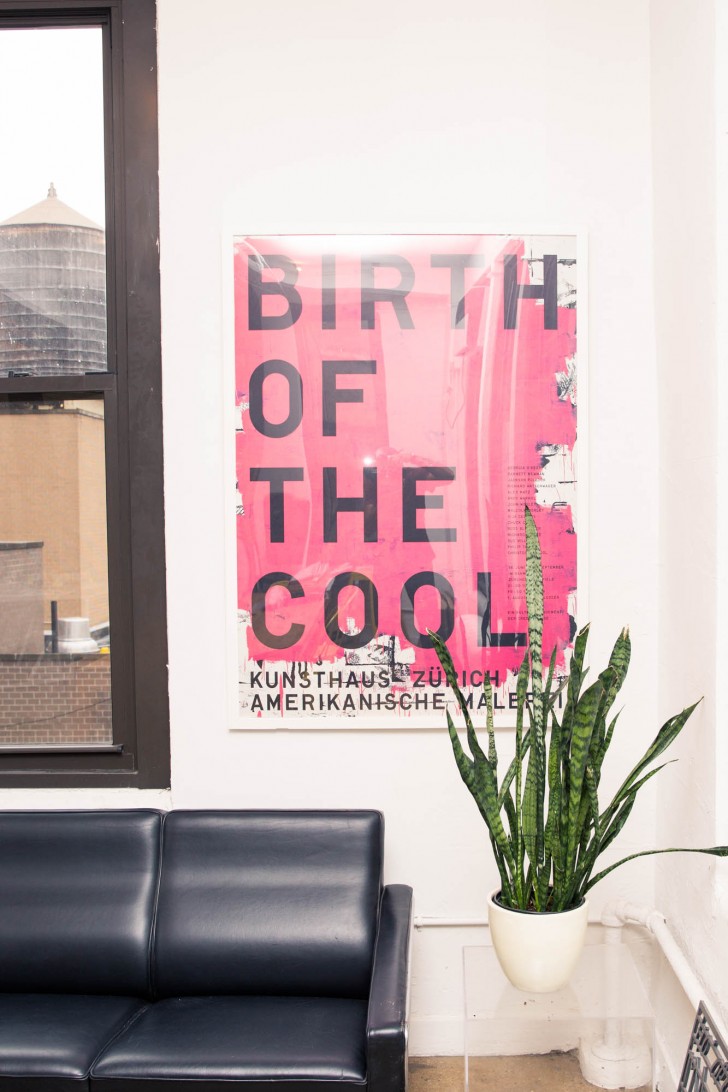 The most annoying part of his job:

“That's what I don't like about my job: the arguing about money constantly. Because you want the most for your client and the most for yourself, you want the most for the designer you're working with, so you fight, you really have to fight. I'm fighting with the vendors. And the designers think big so we want to give them as much as we can for their money. It’s that constant fighting about budget. That was my day yesterday. I have to know what things are costing, so a lot of what we do is production, which can be a pain in the ass. But it is what it is. And I think honestly you have to do it—I think a good designer has to be able to do that. I could talk about beautiful things, but if you can't get it made, you're screwed.”

How fashion week has changed:

“Budgets. There's more and more and more. People want a lot. They want, like, a backstage photo shoot tied into the show because it's cost effective: you have the best hair and makeup people, you have models, so you could just have a photographer backstage. Now you're doing a show and you’re having to do a lookbook shoot backstage and we do that too.”

To be a set designer in fashion you need to be a gonzo:

“Meet as many people as you can. You never know where you're going to end up and you never know what will happen with those relationships you make being on set with someone. There's not one career path. A lot of people have worked with me for five, six years and then they've gone on to do all the windows at Barneys. The relationships you have are super important. I know there's no money, we've all been there. But go and do those editorial shoots as an assistant and do some weird Rocky shoot in on a pier in Brooklyn—I don't know, whatever you want to do to make pictures and do creative things. There's no money and you're going to spend money of your own, but that's the only way to get ahead. I'm fortunate to have a lot of work, but I put a lot of money of my own into shoots because I want it to be right.

“Just be willing to figure out how to make things happen and how to be creative and how to push yourself. Do those shoots on your own when you're starting out. For me, that was the trajectory—I met all those people and then I moved into shows. You’ll work with incredible, amazing, creative people, especially being on set like—it's really collaborative.”