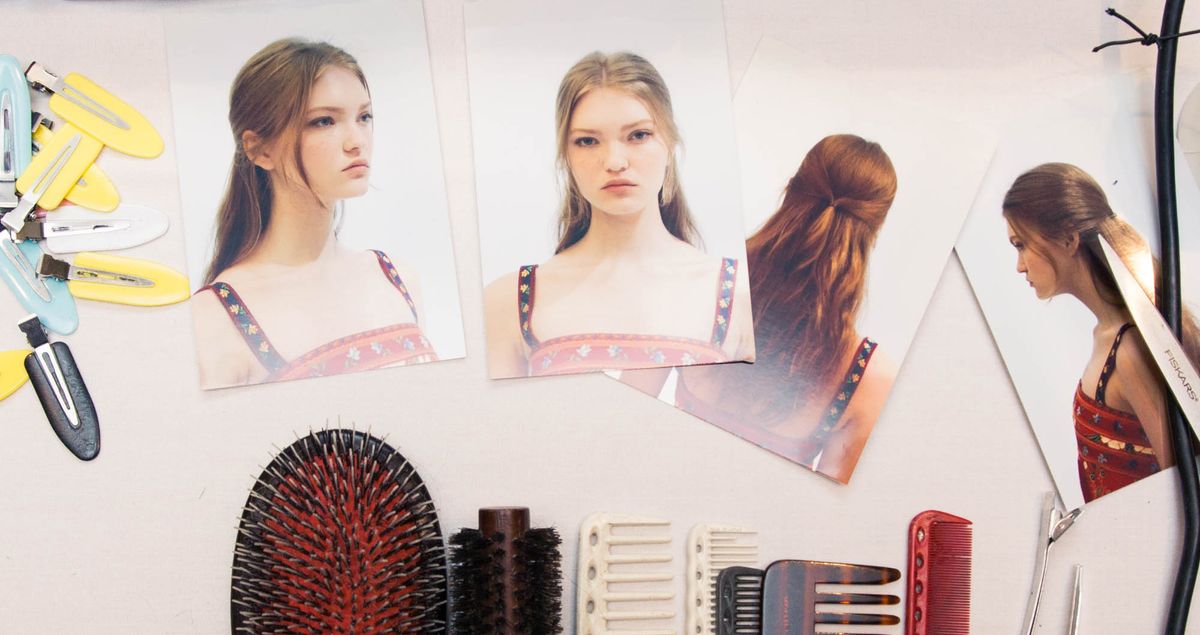 Guido Palau on working with designers, creating a fantasy, and the new breed of supers.

Guido Palau is a Very. Big. Deal. While fashion-folk are prone to hyperbole, we’re being 100 percent sincere when we say that he’s major. Like, doing Marc Jacobs’ shows since infinity, styling George Michael’s ‘90s supermodel explosion video “Freedom” (if you haven’t seen it, holy shit, drop everything!), more work for every international Vogue than you could name, and the most mind-blowing beauty for Alexander McQueen’s runway. See? Major.

As Redken’s Global Creative Director, he’s also been working with Tory Burch for the last three seasons, helping to refine the vision of her woman and aesthetic. And that’s exactly where we caught up with him—backstage at The Whitney museum just before Burch’s spring/summer ‘17 show. When you have access to Palau, you find out more than what the look was, or the inspiration for the show—we wanted to know his take on the fashion industry in a bigger sense: the reason for even having a show in 2016, the role of the modern supermodel, and what it’s like working with some of the biggest names in fashion design.

How he works with designers:

“Every designer is slightly different. I went to see Tory three or four days ago. It all depends on the designers. I spoke to Marc Jacobs at the end of July about his show. Normally it’s three days before. We go in, have a meeting and discuss their inspiration, Tory was showing me some moodboards and the feeling she’d like to get across. Then I try a few things out and show her, and we have a discussion and that’s the way it goes.

“I’ve been very lucky that some designers have been quite loyal to me. Tory’s quite new still for me, it’s probably my third show with her, so I’m really understanding her kind of woman, her aesthetic in hair, and what she likes. This easy glamour, or easy sophistication, or easy style that’s very Tory Burch is something that we’re really developing now after three seasons.”

What he loves about doing shows:

“I’ve been doing shows for a long time now, so along those twenty years I’ve done some really beautiful shows. I get off on every show—it doesn’t matter if it’s something really simple, like today, and the woman to me is the perfect character for the clothing, then I’m very happy. Or it could be something as extreme as a Marc Jacobs show where we’re using tons of wigs, or extreme style, I love the mix. I love the work I’ve done with Alexander McQueen—I’ve worked with the brand for fifteen or twenty years—and Prada. I’m very lucky I have a big cross section of designers I work with and each of them pushes me in different directions and pushes my aesthetic.”

The reason for having a show in the age of Instagram:

“In its purest form, it shows the public and the press the designer’s woman. A fashion show is the designer's purest vision. I’ve been doing shows for a long time, but I still like the idea of some fantasy in fashion, and I don’t think that magic should be taken away from shows. The fantasy aspect of a show, and the idealism of a show is something that we shouldn’t lose, even though I understand we’re in a commercial industry and clothes are there to be bought. The show should give the woman a dream as well.”

Social media and the modern supermodel:

“The whole industry has completely changed, and with that, the way models are coming to our zeitgeist—like through Instagram—has changed. These supermodels of today have such a huge fan base, like millions of people that follow them, which gives them a lot of power, and a lot of branding. It’s a reality of where we are in the world today, and how young people identify with other people, so it’s interesting, to see how the models today wield their power. They create their own brands, and in some ways they’re more in control in a way of their image and what’s seen about them. It’s interesting, I like old idea of a slight mystique about things, which isn’t there anymore. It’s all out for everyone to see, everything is dissected immediately. The girls are themselves, they’re great, I think they’re really having fun, and I think they probably have some sort of control about their careers in some ways and it’s empowering for these girls.”

The backstage supplies he’s always running out of:

“Assistants [laughs]! No, I love Redken Windblown 05, which is a great texturizing spray, I’m kind of addicted to to create all these textures, these messy, beachy textures. I love Diamond Oil for when I need to add shine and sleekness to the hair, and also I’m really into a shampoo called Beach Envy, which gives a great texture to the hair. You can wash your hair, let it air dry, and it gives great volume and texture to the hair.”

How he plans to unwind after fashion month (hint: he doesn’t):

“Unfortunately I don’t really get a break, because as soon as the shows end, the campaigns start. It’s just kind of head-down, go for it, until Thanksgiving I’m pretty full on. I’ve had a quiet August so I’m recharged and ready.”