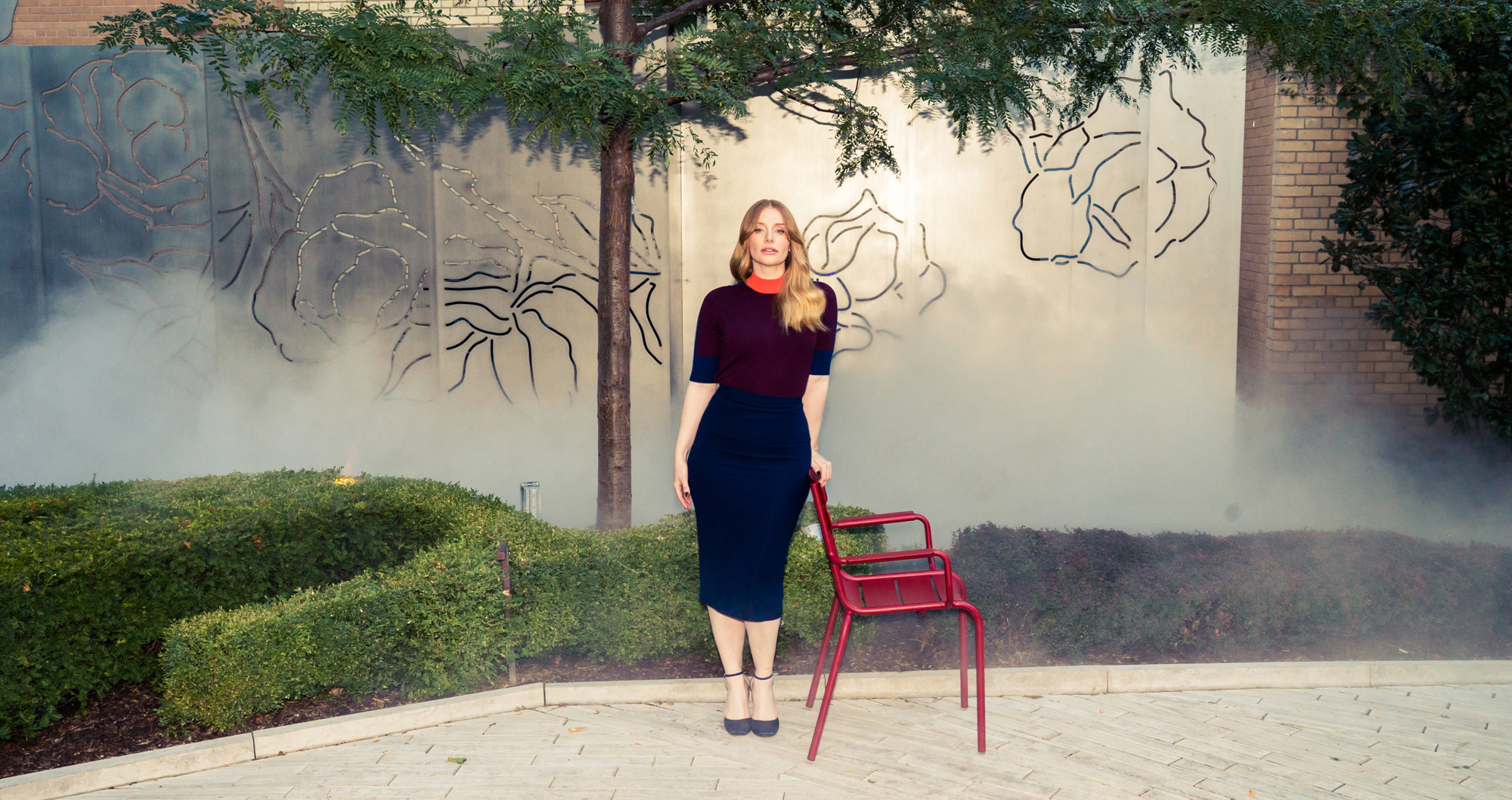 Bryce Dallas Howard Stars In Your Next Netflix-Binge Series

We caught up with the actress at TIFF to talk parties and her new nightmare-inducing series.

Part of what we love most about working in this industry is having a front-row seat to observing the ways in which the creative world is changing. Case in point, how a Netflix series like the amazingly creepy drama Black Mirror, can have a press slot at Toronto International Film Festival. It’s 2016, guys. And its star, Bryce Dallas Howard, she of  The Help, Jurassic World, Lady in the Water (and more) fame, was hanging around Toronto this past weekend to talk about watching her first episode of Black Mirror (and how she ultimately joined the cast), how Netflix changes the rules, partying with Octavia Spencer (NBD), and her totally relatable pre-red carpet rituals. 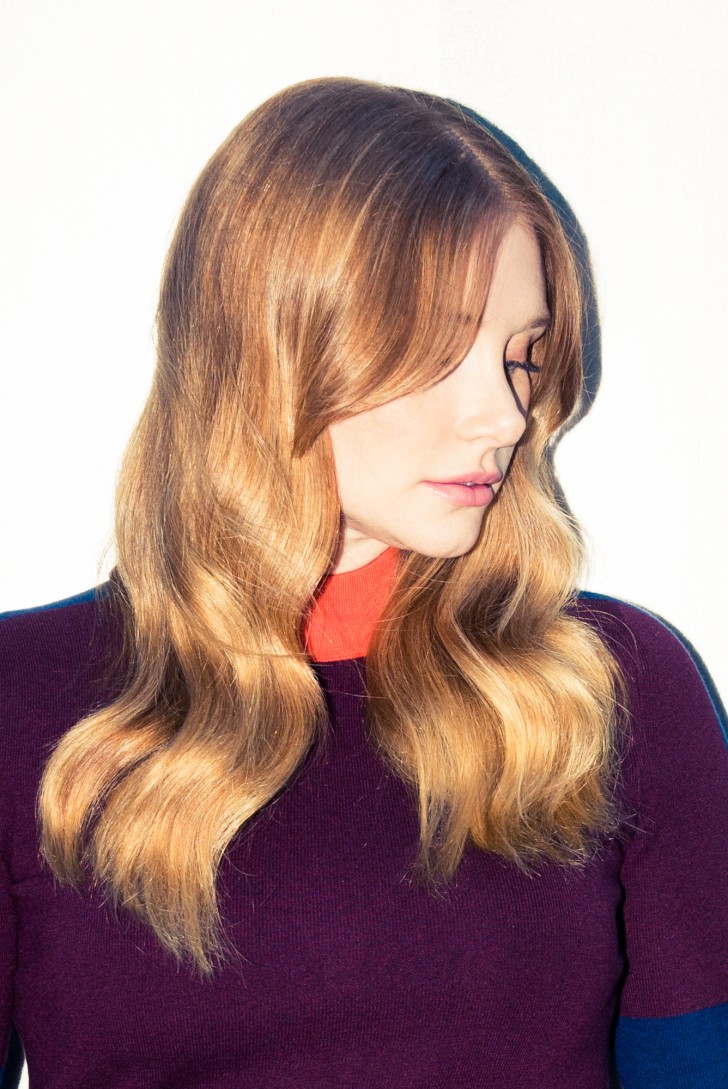 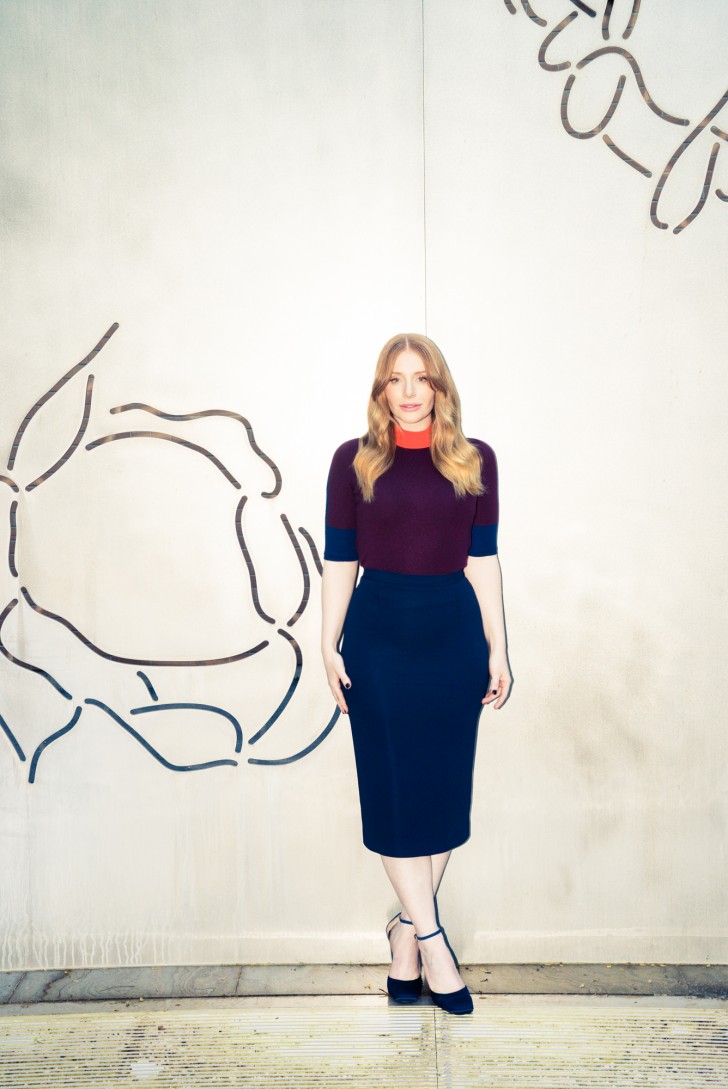 How she first got on board to be in Black Mirror:

“A year [before beginning to shoot Black Mirror], I was doing Pete's Dragon in New Zealand. I was all by myself and I was missing my family. All of my nightmares are always of dystopian futures—it's always some kind of apocalyptic, post-apocalyptic circumstance in which everyone I love is in jeopardy and there is nothing I can do about it. I've been plagued by these kinds of nightmares for years and years and years [laughs]. They kind of quieted down, but my husband kept telling me to watch Black Mirror. Since The Twilight Zone is one of my favorite series of all time, he was always like, ‘Bryce you need to watch this!’ And I said, ‘I feel a little vulnerable without my family, I don't get the sense that it is something for me to watch by myself.’ And he was like, ‘No, no, no, please you have no idea. It's the most genius storytelling on television right now. Why don't you start with a more gentle episode, the second episode.’ And so I watched the second episode and I was by myself, and it was at night and I lost it! It was just, I mean, I sent him all these video messages saying, ‘This is exactly what my nightmares are about! I thought it would come to an end! Oh my god! And I'm all by myself!’ It was absolutely devastating and I actually sent a video—this is going to sound so actress-y—to my therapist [laughs] and I started it with, ‘Doctor so and so, I've taken a nosedive!’ And then proceeded to explain that it triggered these anxieties that come up for me every once and awhile. I didn't watch any more episodes; not because I didn't think it was profound, but it was so unsettling to me. I was like, I need to be in some specific circumstance in order to watch this. Then, right before the holidays, I got a call from Joe Wright, who I had met about ten years previously, and he said, ‘You know, I'm doing an episode of Black Mirror and we don't have a script yet but we have an outline, would you take a look at the outline and consider this?’ And I did and I immediately said to him, ‘Yes!’ And he said, ‘Wait, you don't need to see the script?’ And I was like, ‘Absolutely not!’ So then I needed to watch more episodes of Black Mirror but I knew how to do it: during the day, next to my husband with a certain bit of perspective. I was instantly on board.” 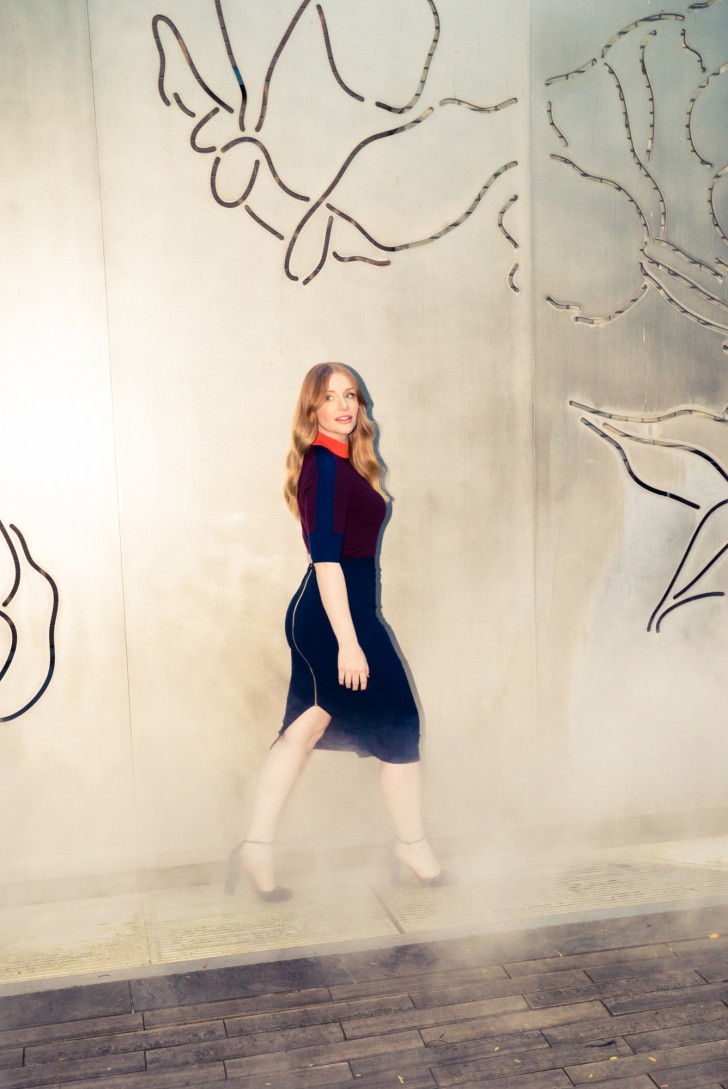 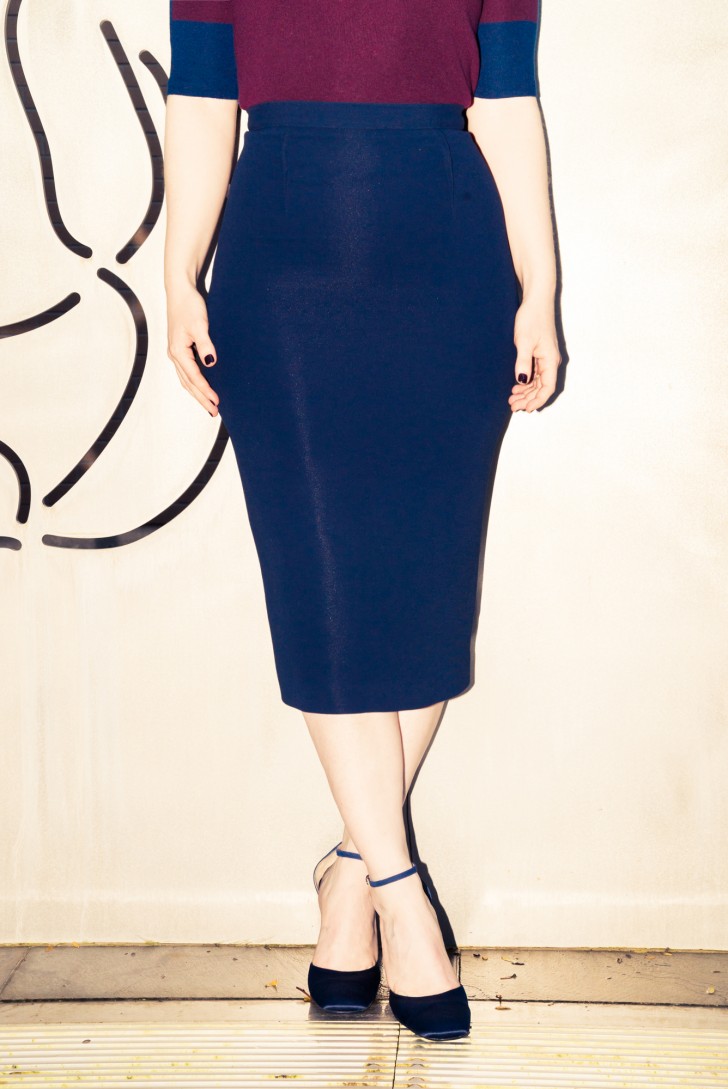 “Honestly it was probably one of the best experiences of my life—not just creatively, but emotionally as well. It healed everything that had happened a year previously. Joe [Wright] and I were talking the other day and we were trying to put our fingers on it, because it was a relatively short shoot and we were only out in South Africa for a few weeks. Television shoots much faster than films. We described it like, when you are a kid and you have that summer camp experience—it's only two weeks, but you meet people that you feel such a deep connection to. That summer where everything aligns and it's the best summer of your life. That's what it felt like shooting this story. I think other than the fact that the entire cast and crew, and everyone involved in the project, were truly in sync in a way that's quite rare, it was also a really creatively freeing experience because Netflix is remarkable. They give a lot of creative freedom and they trust the talent they work with. They are purely there to facilitate and guide if needed. But I think it created an experience that I had yet to come across with that much creative freedom. So it was marvelous!”

“I mean, every single moment that I get to be around individuals who are telling stories is fulfilling. It really is! It is incredible to me that I get to do this.”

How Netflix differs from other studios:

“[Shooting Black Mirror] felt very different to me. You have the ability, in working with and collaborating with Netflix, to make film that otherwise perhaps wouldn't have been supported by a studio. There is an amazing element to it that might seem like not a big deal, but because of the platform there is no one dictating the duration of the content, so you cut the length for what is right for the story. Because of that, you do what is right, you don’t just fill a quota. That trickles down to every single element of the creative process. Netflix is a really smart group of individuals and they have opinions and discussion points rather than making creative choices. I think that it's a really exciting time for storytellers and creative folks to get to have these different opportunities to tell stories that actually do give a lot of freedom.

“I've never done television, ever, and it's released all at once, and you can binge watch—it’s definitely how I consume television! Sometimes two hours isn't enough, sometimes an hour isn't enough, sometimes you just need to watch an entire season of something! And it really satiates that curiosity that gets instilled when you are watching a really good story. So it's cool, it's exciting. I want to do more. I have a lot of respect for everyone over there.”

How she gets ready for a red carpet:

“There's figuring out what your outfit is going to be. I don't have a stylist, but I work with a publicist who is so awesome and we are really close. Everything she suggests, I wear or purchase. On the actual day, I take a shower, if I’m lucky I get to have hair and makeup done by people who make me look way better than I’m supposed to [laughs]. It's almost like cheating! And then, I get dressed and off I go. Of course, once you have formed long relationships with makeup artists and hair stylists it ends up being really fun. There is lots of chatting and it's like you’re hanging out with your friends, while they’re putting you together. [Right before walking out on the carpet] I make sure that no one can see that I'm perspiring, so I do a quick little check. Like, how are the armpits doing? I adjust my spanx in the car. I hike down my dress and ask the person next to me if I have anything in my teeth and step onto the red carpet.” 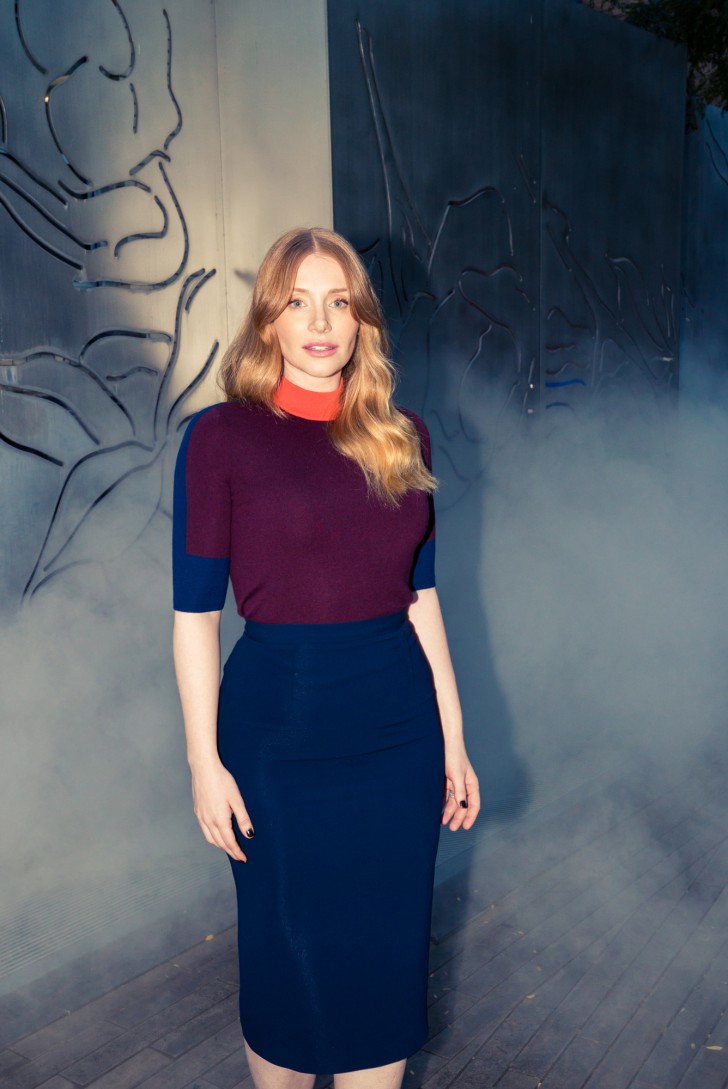 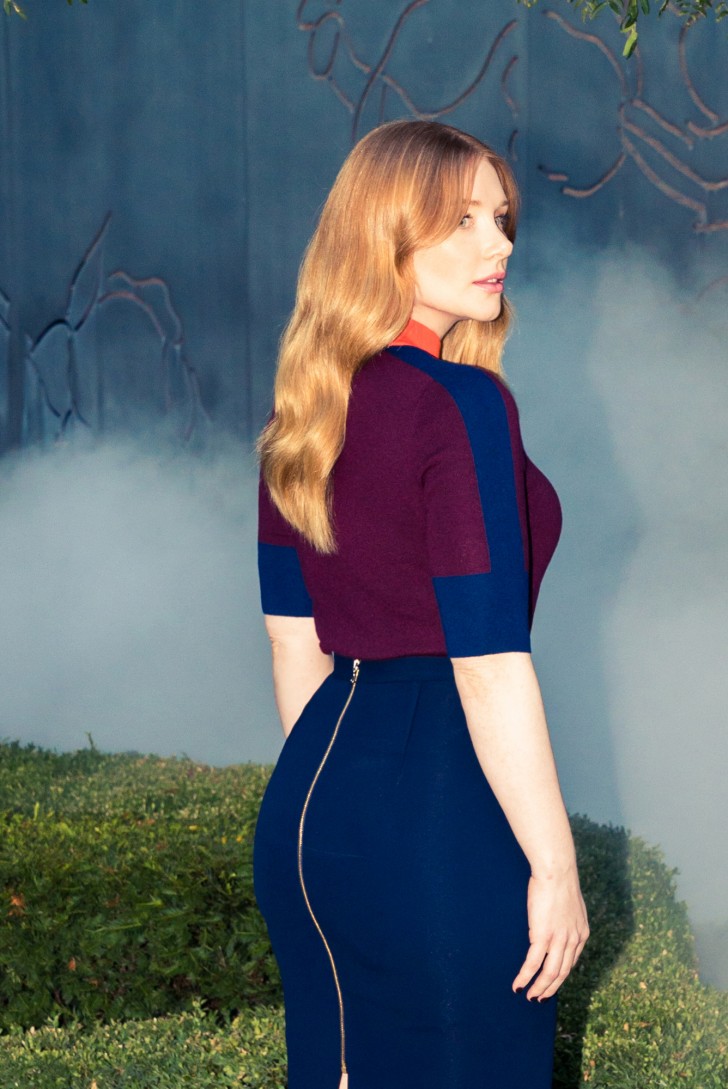 The most fulfilling part of her job:

“Immediately what kinda flashes through my mind are the various roles I've gotten through this experience. Not just acting roles, but getting to be a director backstage at a gay cabaret when I was 18, getting to be an assistant stage manager for an avant-garde show when I was 20, getting to write, getting to the last ten years when I've been directing quite a bit. And of course, the opportunity to do theater and film. I mean, every single moment that I get to be around individuals who are telling stories is fulfilling. It really is! It is incredible to me that I get to do this.”

What it’s like to go to a TIFF party:

“I went to a party that was thrown by InStyle with Hollywood Foreign Press Association. I went there alone and walked in and to my right I saw someone from behind and I instantly knew who it was: Octavia Spencer. And I was like, ‘OCTAVIA!’ And she turned around and I basically attached myself to her. I used to get so intimidated by these events and there is always a part of me that feels a little bit like, ‘Oh my gosh. Everyone is really dressed up!’ And the idea of small talk is always somewhat terrifying but then, the last several years when I go to one, there are so many people I love like family. I mean, it always ends up being a great, awesome fun night! Like I got to see Dakota Fanning and the last time that I saw her was the day she took her SATs and then went to the junket for Twilight Eclipse—I was so impressed with her. We had such a fun time doing all the press together and I remember talking to her about NYU. So I got to see her again last night, she’s a senior and she is going to be graduating soon and it's wonderful. It always feels like no time has passed.”