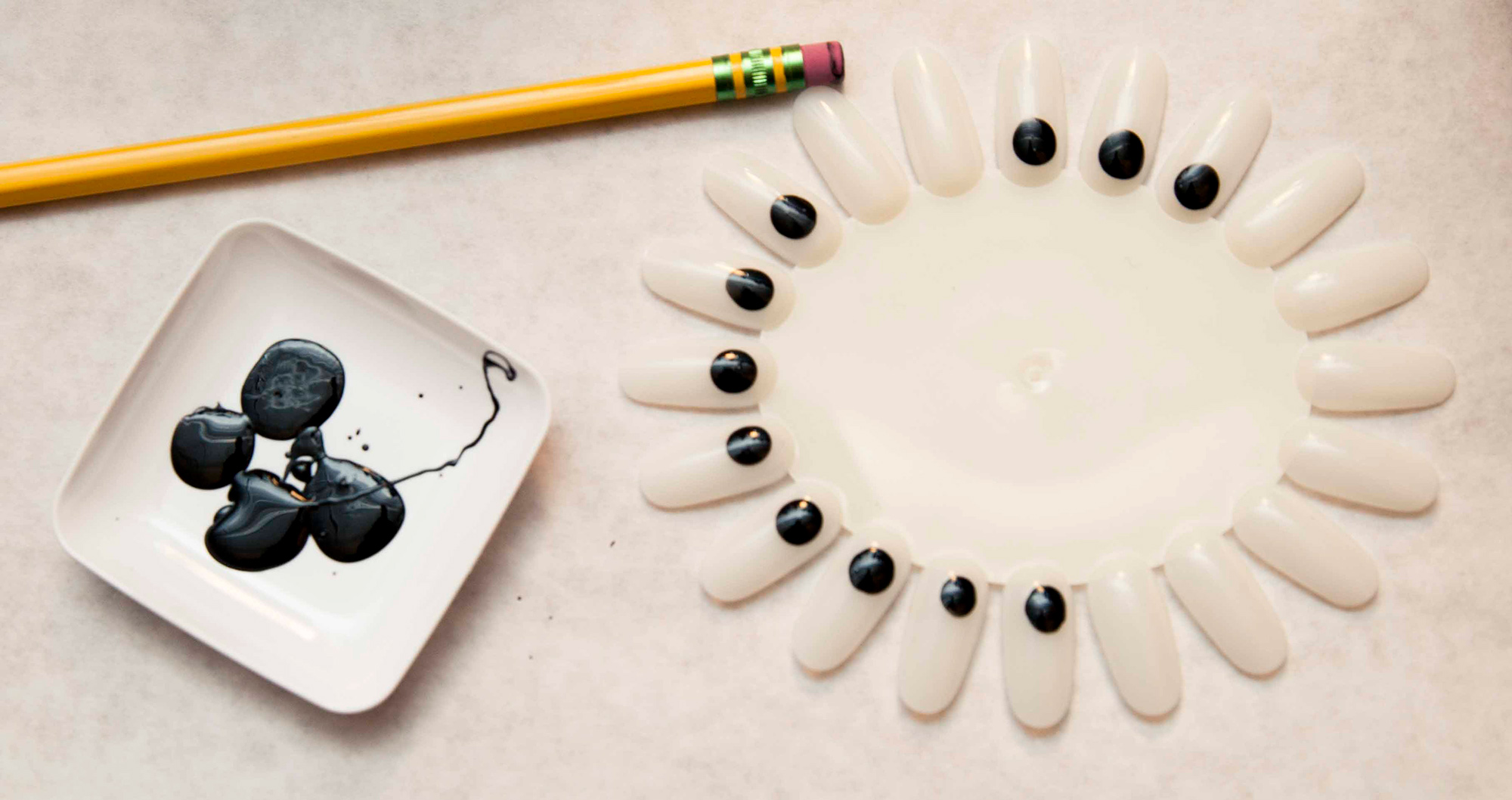 Meet The Manicurist Who Polishes 1000s of Nails Every Fashion Week

Miss Pop, the brains behind digits at Jeremy Scott and Rodarte, on all-nighters and her lasagna-only fashion week diet.

Around this time of year, a certain bummer refrain of ‘ugh, fashion week’ is everywhere. The back-to-back-to-back onslaught of shows, presentations, appointments, coupled with the pressure to file stories, or work-around-the-clock to make the kind of heart-stopping spectacle fashion week is synonymous with happen, and even just adequately cover on Instagram, Snapchat, and whatever else comes next, is alllll admittedly draining. But at the end of the day, all of our jobs involve seeing and experiencing some incredible things—and so we’re making a mental note to stop with the eye rolls and focus on feeling grateful.

A model for the attitude we’re more closely aspiring to? Miss Pop Nails, who, even on a Saturday morning that could typically be spent, say, sleeping in and eating brunch, was happy to field our phone calls, despite having the mammoth task of hand painting an impossible-sounding number of nails (hint: 1000+)—nevermind the creative pressures that come with being charged with creating some dozen-plus concepts for a surface that’s barely a fraction of an inch. Her energy poured through the phone, as she told us about everything from what it’s like to click creatively with Jeremy Scott (where we photographed her in action with OPI), to her strategy for fueling during the week (a self-described ‘Garfield’ diet, where she eats a single massive slice of lasagna a day), to what it’s like when your workplace necessities involve a head lamp (in case of emergency—a tip we first heard from Madeline Poole) and how newbie backstage reporters renew her love for this whole crazy fashion week thing. 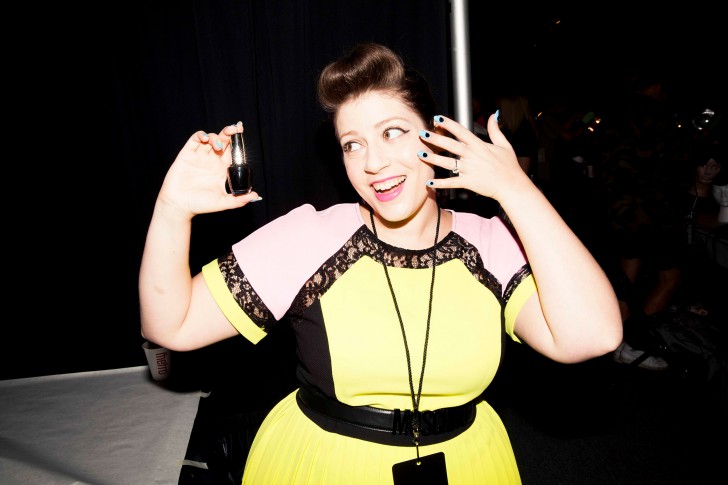 “There are a few things I do before fashion week. Probably the first thing I do is plan my outfit, from shoes, to jewelry, to accessories. [But] six weeks out, I start emailing with the designers: what’s the collection about? What are their shapes like? What are their prints like? What are their colors? They’ll send me their inspiration, and from there, I go into my secret nail art laboratory, the studio I have, and I just paint samples. Right now there isn’t a surface in my apartment that isn’t covered in nail supplies, and I have a two bedroom apartment. [laughs]” 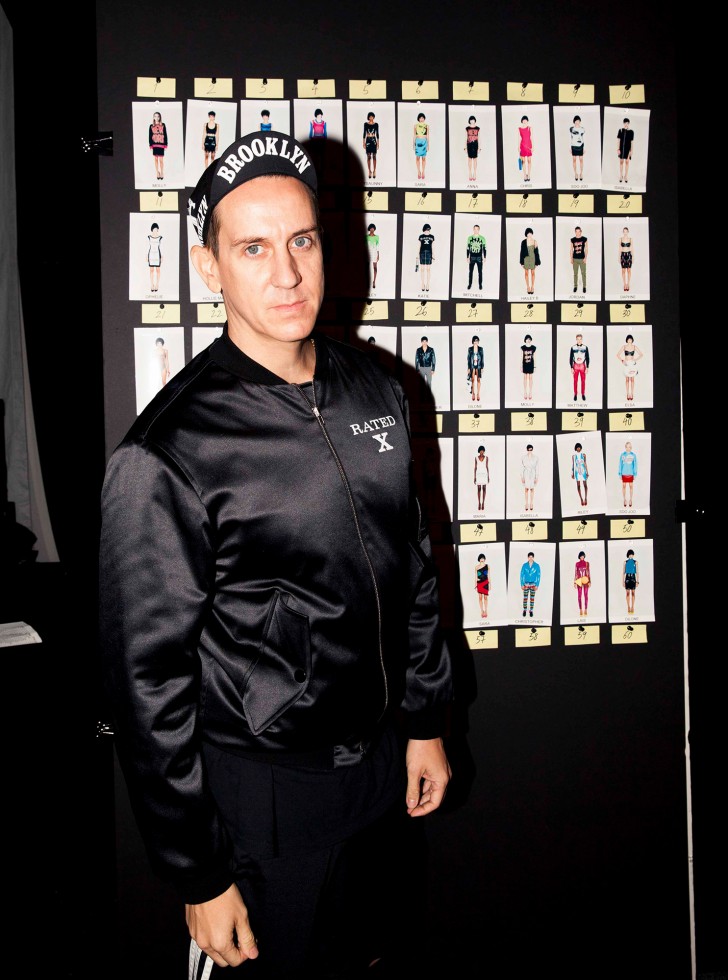 Who she’s working with this season:

“I only took on a few shows [this season], because I’m getting married in October. We have Jeremy Scott—he’s the kind of person who loves colorful nails, mix-y match-y, no two girls are the same. He gives his girls such personalities. I’m doing nails in red, hot pink, yellow, black and blue—it’s like magic. And then we’re doing these giant dots, almost like a circle at the bottom of the nail. His accessories reference the same shape. Have you ever seen the movie My Stepmother’s An Alien? I feel like this is that, dialed up to 11.

“For Nicholas K., the collection was inspired by the Jordanian desert, so we did all these desert sand colors. The geode nail is really happening right now, so we took that, and put it on the nail. Over it I used my metallic nail foils—Miss Pop by Tattify—we applied it to the nail and distressed them. It’s organic, future-y, and desert-y, all at the same time.

“The next show I did is Marissa Webb. I can’t say enough nice things about her. Her whole thing is that she loves to mix feminine and masculine. We wanted to bring that feeling of duality to the nails. Almost like a bold, simplified, ying yang—we did this white nail, cut the nail in half, diagonally, leaving half the nail bare, at the bottom.

“For Rachel Antonoff, I actually have three looks. She just has so much energy! Her collection is Betty and Veronica-themed, and it’s all about hearts. We did a heart print, like a scribbly pink-and-red heart, and we actually used Sharpie marker to outline the heart. You can actually use Sharpie on your nails—just let it dry before you top coat it! We have another look in all different pastel colors—it’s a twist on the reverse French, where the ‘tip’ is down by the cuticle. It’s a scalloped edge, so it looks like a heart. For the third look, we’re doing a speech bubble, and an exclamation mark as a pairing.” 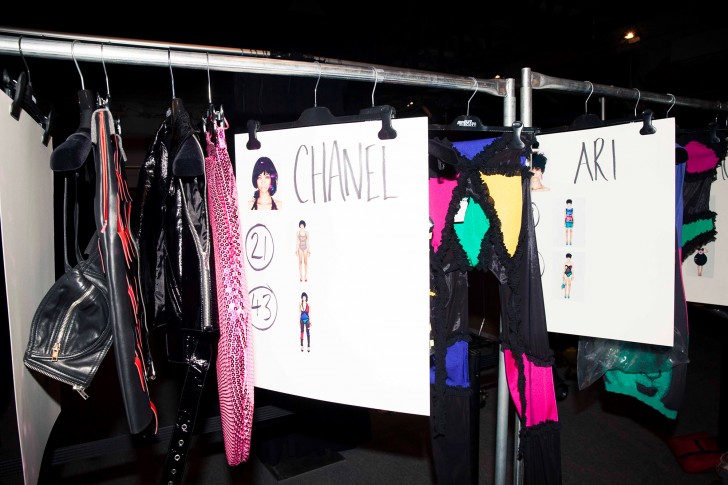 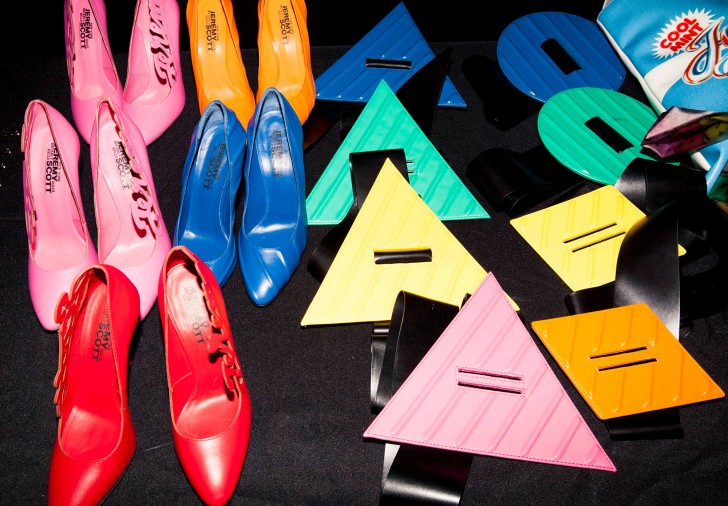 Where her creative process begins:

“I think about the editorial looks I’m doing now, and how they’ll evolve in the next six months, all with the designer’s collection in mind. It’s very collaborative. Nails are really an accessory that finishes off an outfit. It’s so great that nail art and fashion work hand-in-hand, and I can work with these designers to push the trends forward for beauty, too.

“I always say nails are the beauty you do for yourself. I have crazy hair, I do a pompadour, I do big makeup. I don’t see any of that all day, what I see is my hands. When I’m interpreting that, it’s like, ‘who’s the girl who’s wearing these clothes, and what does she want to see on her nails?’, and thinking about how I translate that.”

How many nails she paints per show:

“The [first round of] designs, I call them my ‘perfect rejects.’ They’re samples I made with the colors, and a relative idea of the collection, because from there, the designers will fine tune their vision. For the beauty test, which is maybe a couple of days before—I met with Jeremy Scott and Carlyne [Cerf de Dudzeele, the show’s stylist] Friday—the show’s Monday, so I have all weekend to paint 900 to 1200 tips. So far this season, I’ve already painted 1540. I have an assistant, who’s awesome, so I only had to do 900 of those on my own.” 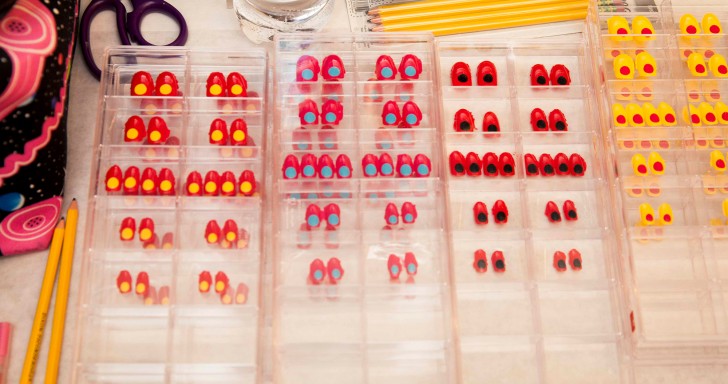 “There are some designers I’ve worked with for so long, like Marissa Webb. I know her style so well after all of these years of working together. I painted samples before she even sent me her collection colors, and they were the colors of the collection. She has a very cohesive vision. But it’s always collaborative. That’s why I call them the perfect rejects—I take what they give me, but when I go see their collection, the prints [I’m referencing] could’ve gotten the cut.”

How she’s not afraid of (big) last minute changes:

“A few seasons back for Jeremy Scott, I painted 50 sample nail looks. I loved them all, and I walked in the door [and saw the collection for the first time], and Jeremy goes, ‘oh my god, let me see!’, and I was like, ‘oh, no.’ Once I’d seen the accessories for the show, which were these sheer colorful tights and white Mary Janes, I was like no, none of these are right—I’m going to paint you one sample, give me five seconds. I painted a sheered out, colorful polish, to match the tights, with a French tip with a strap across, like the Mary Janes. I showed him, and he was like, ‘that’s the nail’. When I walked in, I knew.” 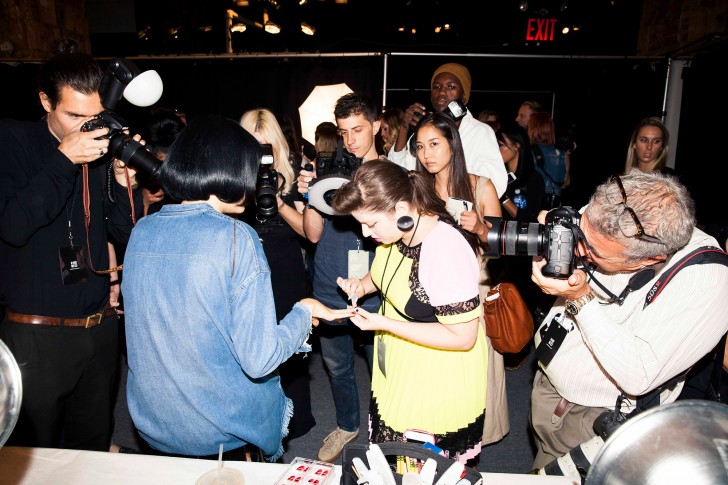 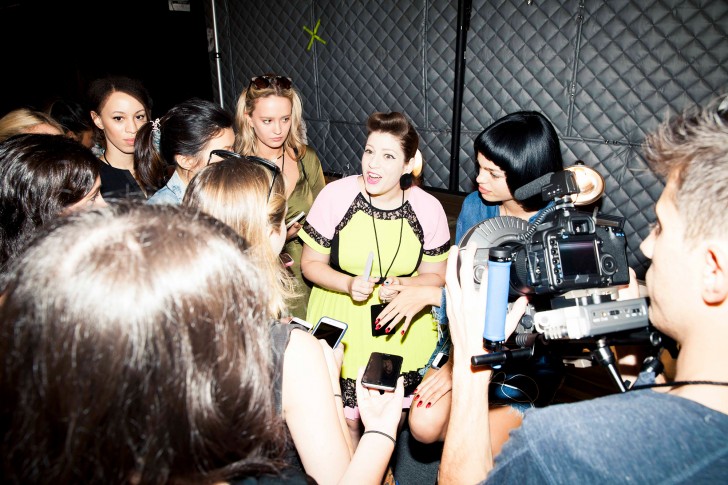 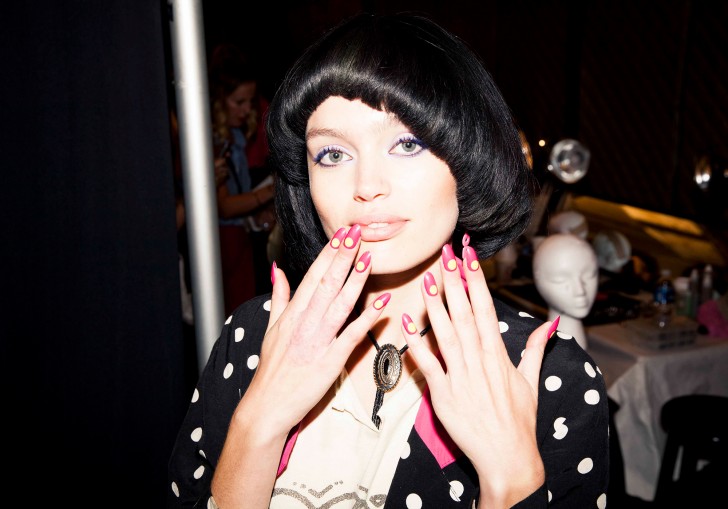 ...but it’s different every time:

“Someone like Rachel Antonoff, I’ll walk in, show her everything, and from there we’re just choosing which nails go with which look. Marissa Webb, I painted her some samples this season, I walked in the door, and I’d painted one of the looks on my own nails. I don’t usually do that, in case someone sees it before the show, but with this nail look, I just couldn’t wait. I walked in the door and she looks at me and goes, ‘what is on your nails? I have to have that for my show.’ So we felt the same way, and she just laughed.”

How she fuels for a week of shows:

“I joke that when fashion week comes around, I go on the Garfield diet, which is one piece of lasagna a day, because it’s enough calories to sustain you [laughs]. Coconut water, regular water, and iced tea all day long, and then I come home, and unapologetically eat a piece of lasagna. I’d love to tell you I eat healthy, and my [fiancé] tries to get me to eat better. When I’m on the go and not in the studio, it’s like, ‘what’s nutrition?’ It’s my favorite, I wish I could do it every day of the week. I don’t expect to eat, I don’t expect to sleep, but I do expect the nails to be fabulous.” 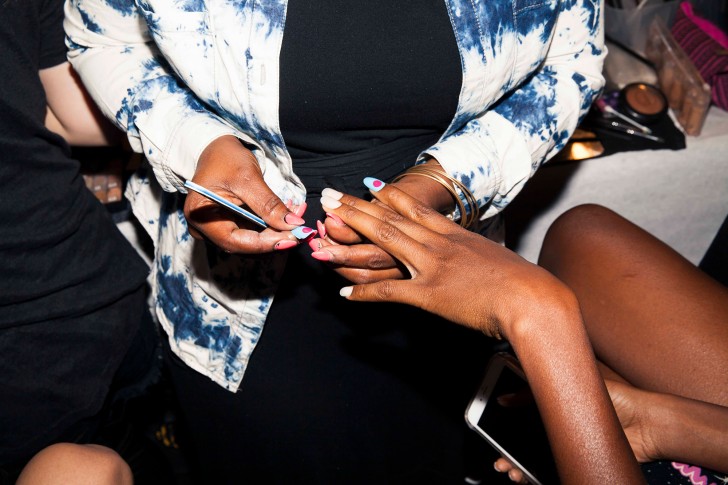 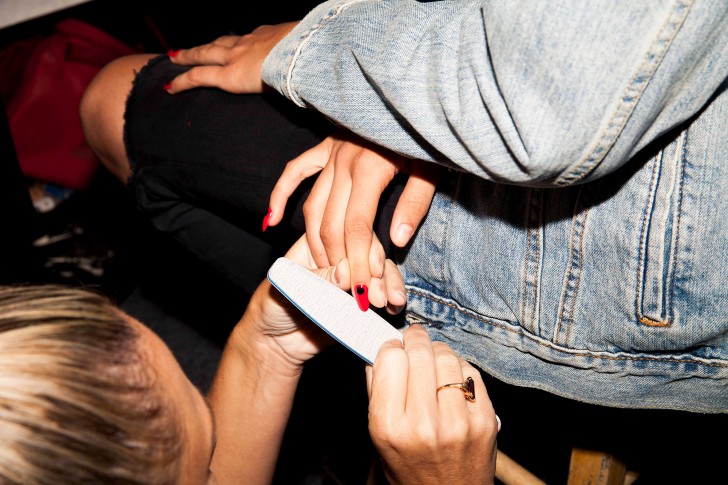 What you’ll find in her fashion week kit:

“Everything you’d need for an emergency. We have a model who has black gels on, and it’s going to take an hour and a half to soak them off? Somebody missing a toenail? I have all kinds of tips and tricks. We’re prepared for Apocalypse Nails. I even have lamps, in case the lights go out.”

Why she’s not afraid of a little hustle:

“For Nicholas K. this season, I had 24 hours to paint the look onto 900 nails. But we can make it happen, it’s fashion week! It’s not sit-on-your-butt-and-watch-a-movie-week. I’m so inspired when I see everyone at the shows in their Day One outfits, it gets me excited. Sometimes it does get exhausting, like when you have three hours of sleep for the past four nights. It can be stressful, and at the end of the day, it’s fashion, and we can make it anything we want it to be.”

Why she loves working with editors during fashion week:

“I’ll romanticize a nail like it’s my dead-great-grandmother, I’ll talk about it for ten minutes. I’ll realize I’m taking you on this entire journey of this nail, what it means, where it came from. For me it’s a real point of connectivity to see which looks I’ll push forward into editorials. I’ll send emails, like, ‘hey, Seventeen [magazine]? You’re going to want to be at Rachel Antonoff, this is the show for you. Trust me’. I’ll carry my ‘perfect rejects’ around over the course of a month, and while I’m on set I’ll pull it out, and an editor will be like, ‘we have to do that’. It just makes my day. One man’s junk is another man’s treasure, right?” 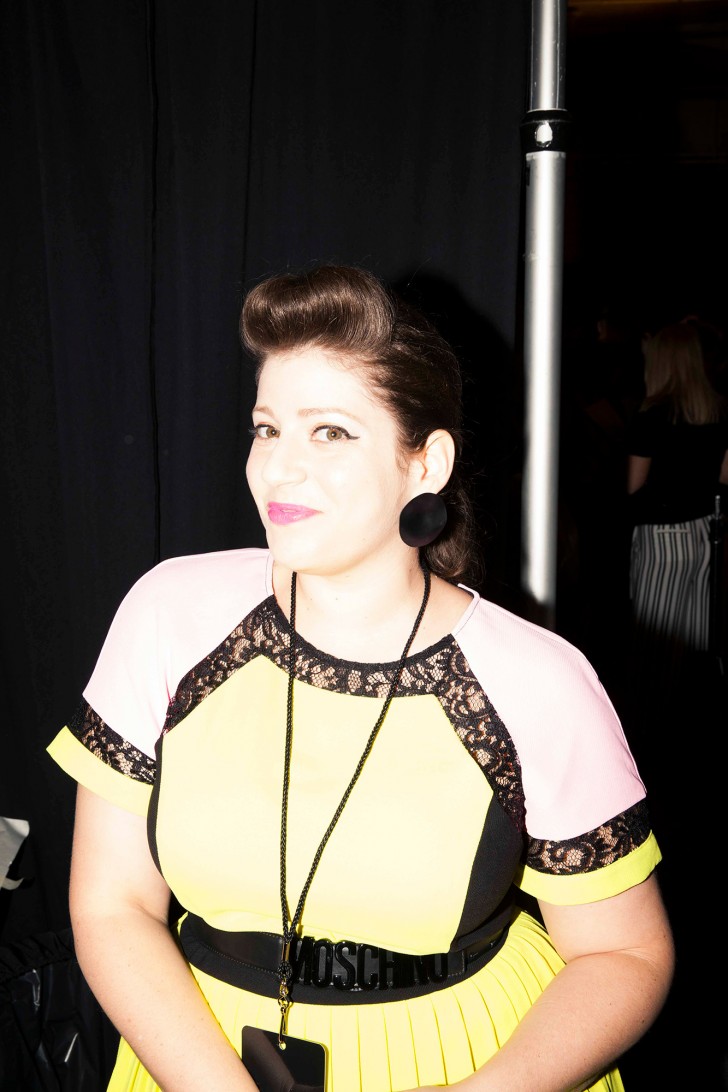 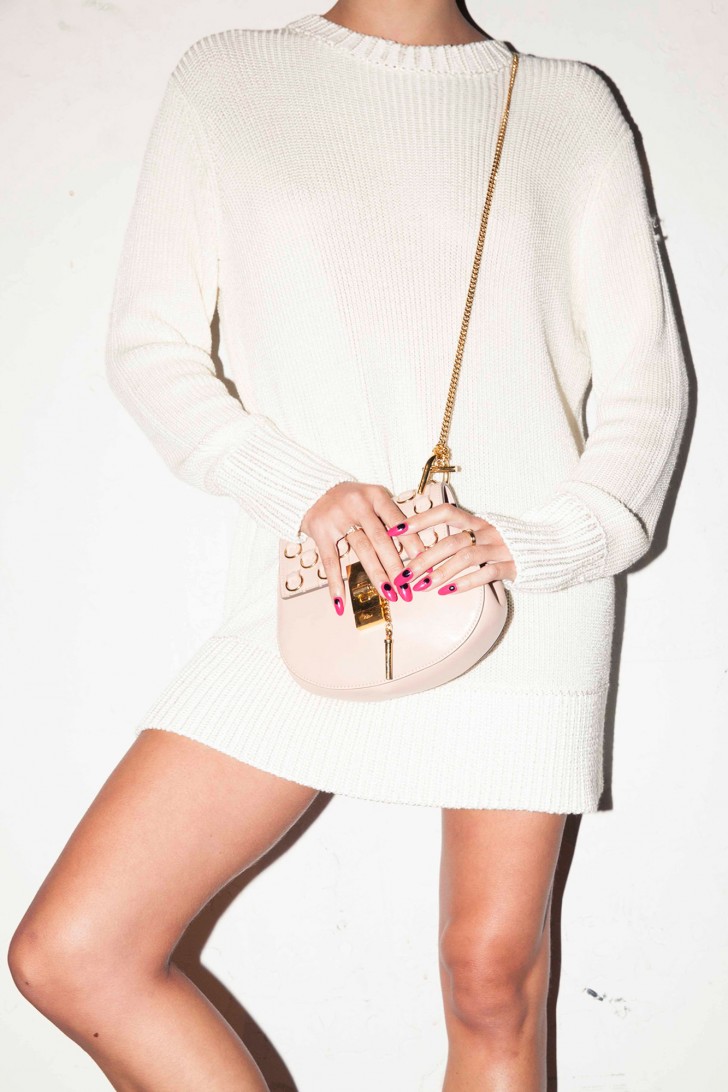 How fashion has changed its position on nail art over the years:

“There’s no ego in nails. For me, it’s good as long as there’s nail art on the runway. When I first started painting shows, back in 2012, I would go to designers and give it my best sell, on why they needed nail art. It’d be a hard sell, but they’d take it, even just something minimal, like a half moon. Now I walk in the door and they expect it, and it’s part of who their girl is.

“Fashion week really pushes me creatively, as it does all the artists who work [with the designers], which is why we’re so excited to work in those trenches. No one’s just a walking set of hands—they have the outfit, they have their hair and makeup done. It all has to come together.” 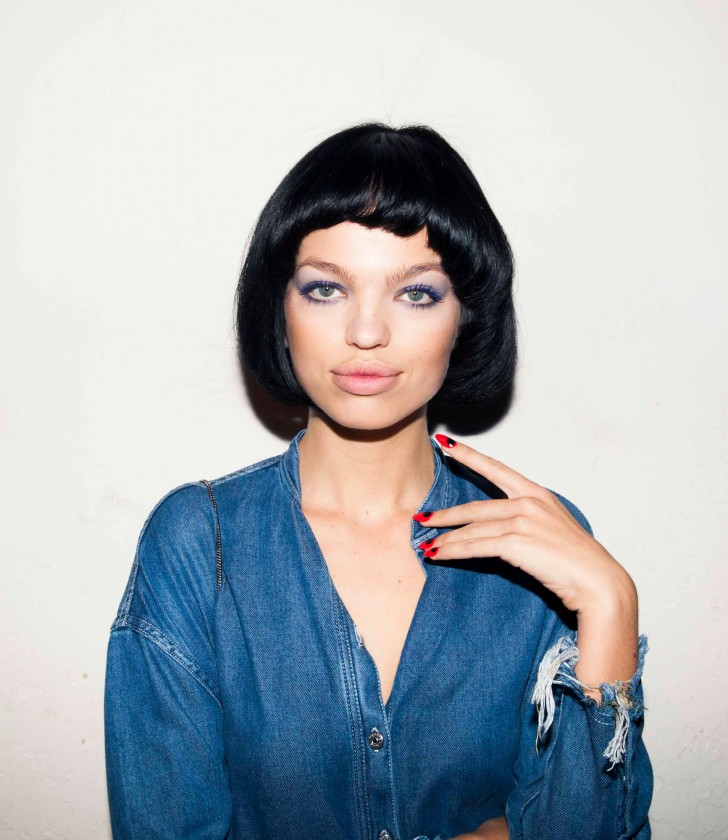 How she really feels about fashion week:

“My goal is always to make the runway look accessible to the DIY girls at home. Now we’re dealing with a generation of artists who have seen the shows, on the runways, backstage coverage, all on social media. I saw the coverage on TV, and it was never beauty shots, it was the model walking. That generation brings all this energy, and perspective. It’s become less for buyers, and more for fashion girls. It’s great, and it’s a really fun time to be working the shows.”