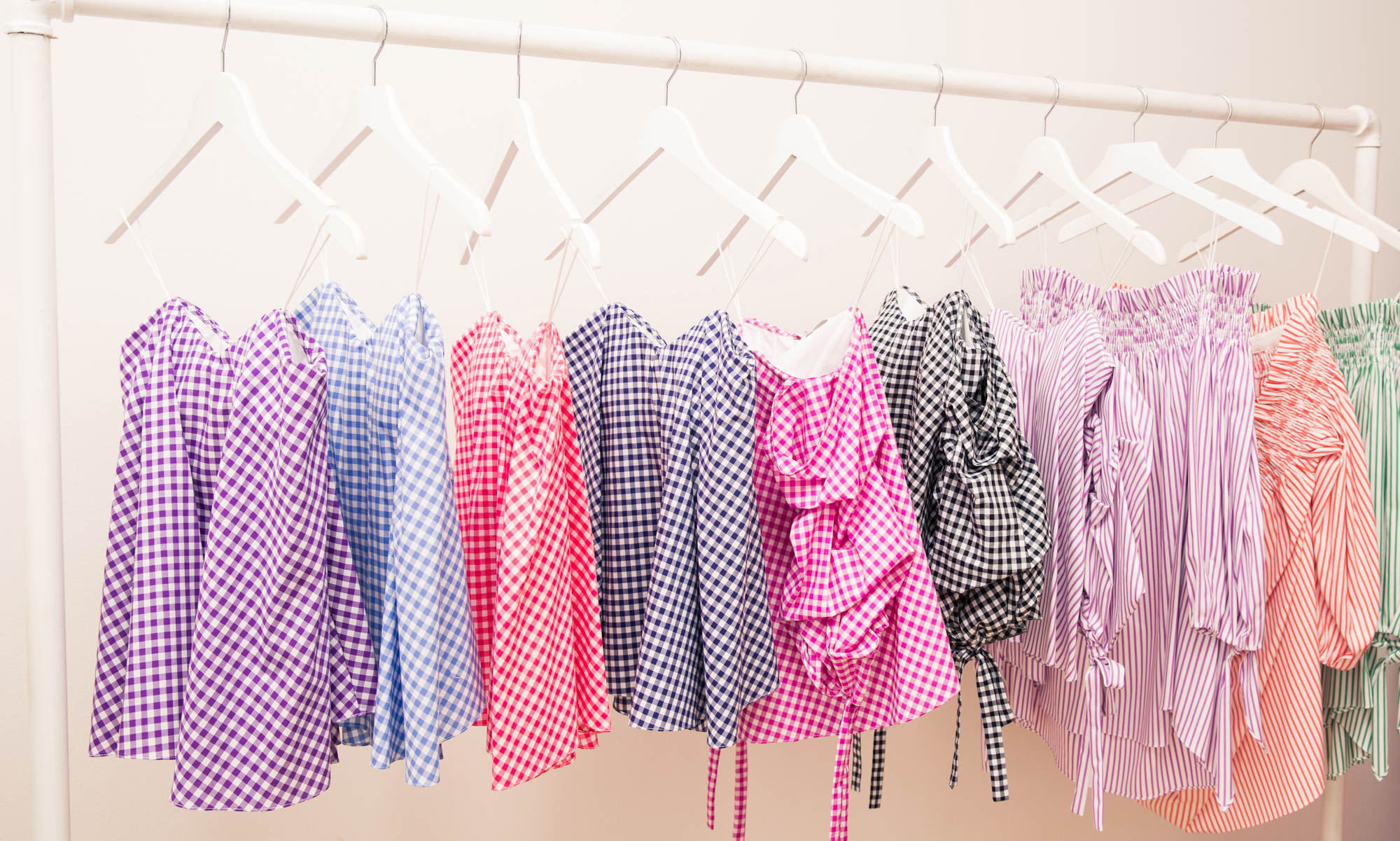 How Caroline Constas Is Quietly Taking Over Our Wardrobes

Have you bought and worn an off-the-shoulder shirt or dress in the past six months? My guess, if you’re reading this, is yes. I have too. The silhouette is easily one of the biggest of the summer and this upcoming season—and shows no signs of abating. But, I’d like to pay tribute here to the woman who I think is responsible for getting us to show off our shoulders (doesn’t baring that body part just make you feel pretty?): Caroline Constas. And frankly, despite the fact that she’s been doing them long before they ever trickled down to Zara levels, she still does the look best. In fact, I’d argue she does all easy, breezy, resort-y, pretty clothes best: lace-up shirts, bell-sleeve blouses, ruffled flamenco dresses, all in light cotton and other unfussy fabrics. Full stop. It’s why the Montreal-born, New York-based designer is quietly responsible (see: no big runway extravaganza) for making the exact pieces we want to wear right now. And it’s why she has the support of major retailers like Bergdorf Goodman and Shopbop. Oh, and why everything she does seemingly ends up on Zara’s moodboard. 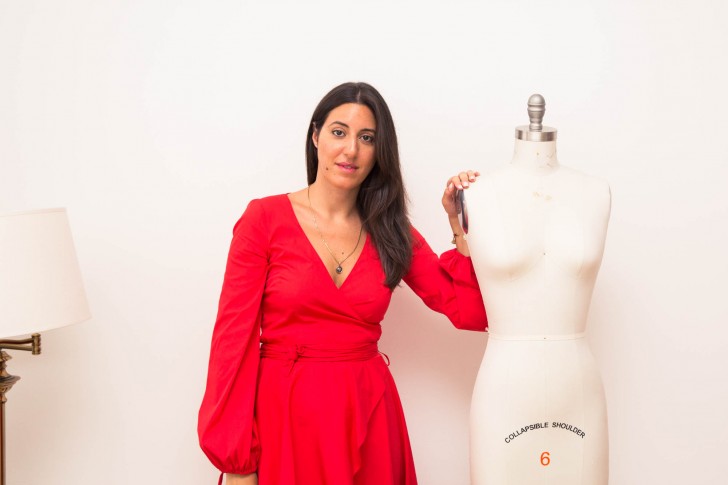 Having her own label has always been the dream:

“Launching my own line was something I had wanted to do since I was six years old. I'm Greek, so I'd always go to Greece in the summers, and my grandmother would sew these dresses for me. I would get very excited when we would go look at fabrics and I would think about what I wanted and how I wanted them to be created. And I would give her artistic direction. I wanted bustiers even back then. They never really came out like that, but it's interesting because that was always my aesthetic from a very young age. I taught myself how to sketch, usually on the long flights between Montreal and Greece. It became a passion from elementary school and throughout high school.” 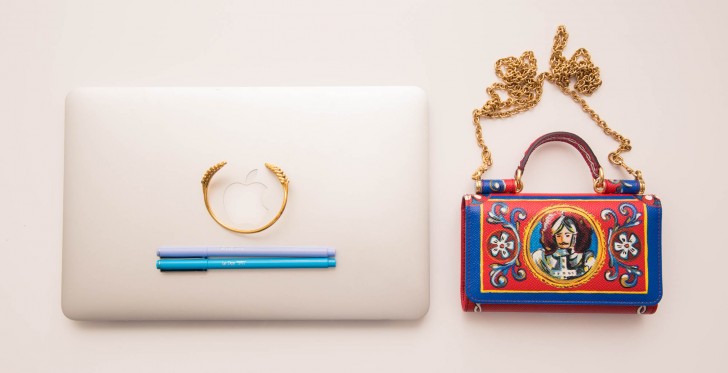 How she made the dream a reality:

“I moved to New York after college—I was actually pre-med, so I was studying to go to medical school. I always wanted to try fashion, so I took a stab at it and I got my first job working in sales. I was able to learn a little bit about the industry from a business standpoint. I started to work for a lot of smaller brands that were just launching, helping them orchestrate the launch. Then I started consulting for designers on the side and helping them with sales contacts and PR contacts. I actually got involved in production also.

“While I was doing all of this, I decided to go to Parsons to study fashion design with a continuing education degree. I was studying while I was working, and I decided in 2012 that I really felt ready. I started to think about what I would do and how I would do it if I really did launch a label. Obviously the economy was in a terrible place and it was a very scary time. But I decided to do it anyway. The first season was really tough, the second season was also really tough, but within the second season I started to get some sales, and then it really grew organically from there.” 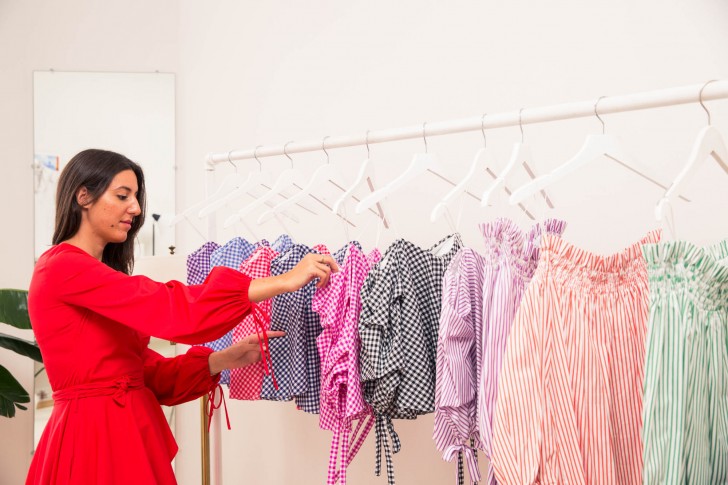 How she got her business off the ground:

“I started with a capsule collection of 12 pieces, and since I had the background in sales and I knew the buyers and some editors, I started knocking on a lot of doors. Intermix was the first store who came to see me. They didn't pick it up that first season but they were very involved. I would take a lot of their feedback and I was always in touch with a lot of their buyers. Shopbop picked it up for Spring 2014 and that's when I introduced this Italian cotton. We launched with six styles of shirt dresses and we sold out in 24 hours. That was really exciting—because before you ship something, you have no idea what the response is going to be. I remember sitting in front of the computer and watching them disappear. We saw the demand, so I started to build on that demand.” 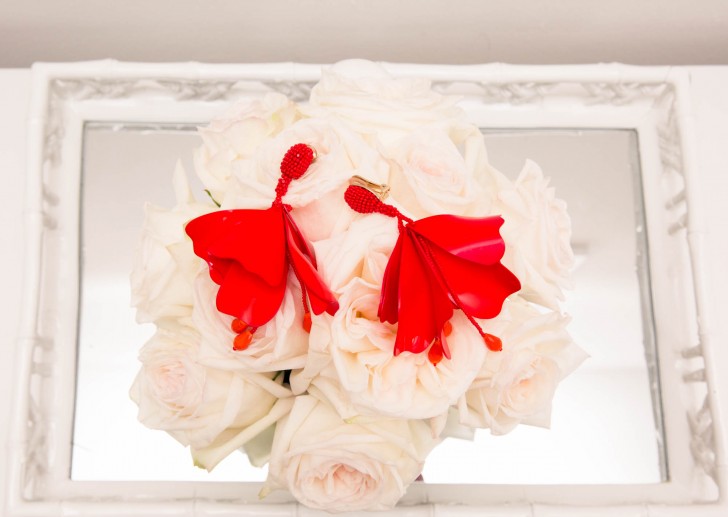 How she found her brand identity:

“The really difficult thing for a designer is figuring out what is my identity. And I think it took me that one year, from 2013 to 2014, to find it. It's this jet set style, and it's my experience as a child and being exposed to different cultures. That's what excites me when I'm designing: people who also have that style and have those interests and they're cosmopolitan and they live to travel the world. They're very fun, festive clothes.

“The easiest way to look at it for me is that I have such a particular style myself and every time I design something, I ask myself if is this something I would wear and if it’s something I would wear in five years and in ten years. I know now very much who I am as a designer, who I am as a brand, what my identity is—the challenge is always updating it and always making it look new.” 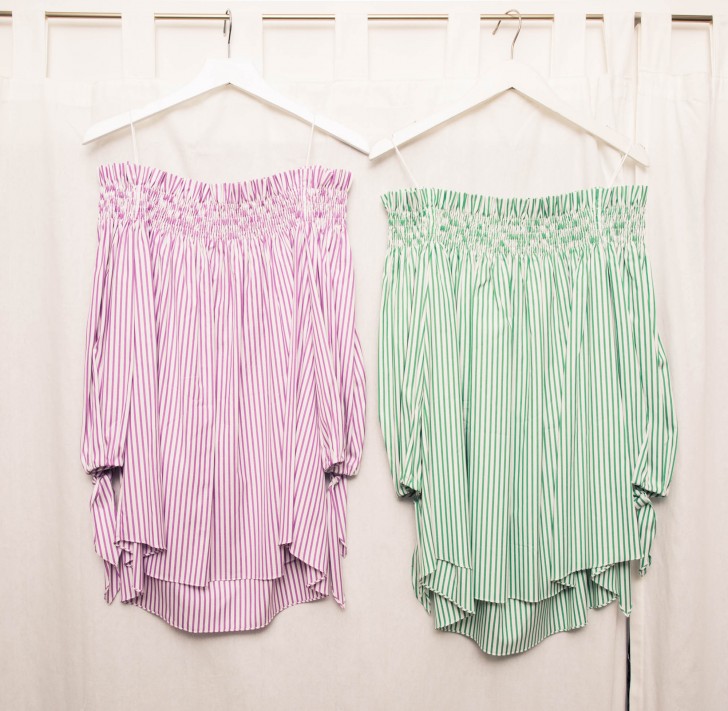 *That* off the shoulder top:

“I think it’s this sexy design in a casual fabric that people have been getting excited about. It just didn't exist before—you either did off the shoulder in a really beautiful silk and it was very sexy and glamorous, or you did these cotton peasant blouses. When you mix them together you get this blend of something that's a little bit new.

“The first piece people got very excited about was the Bardot dress, which had the ability to be worn off the shoulder or on the shoulder and it was a pinstripe blue and white Cambridge fabric. Now I always use that as a reference. I'll always update it.” 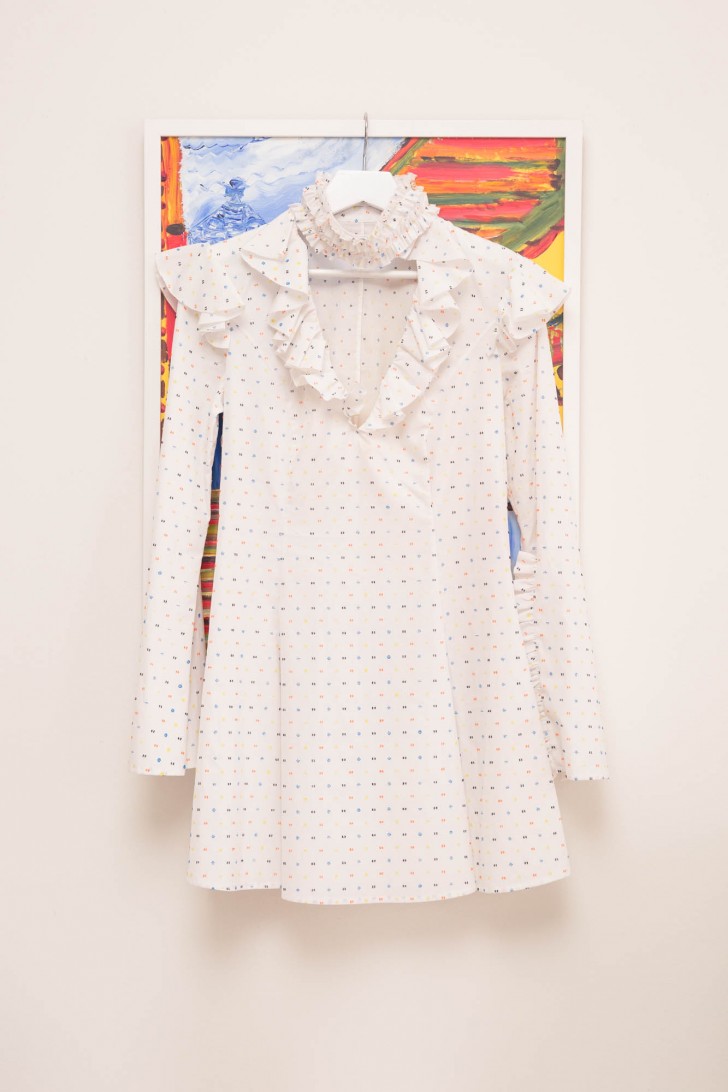 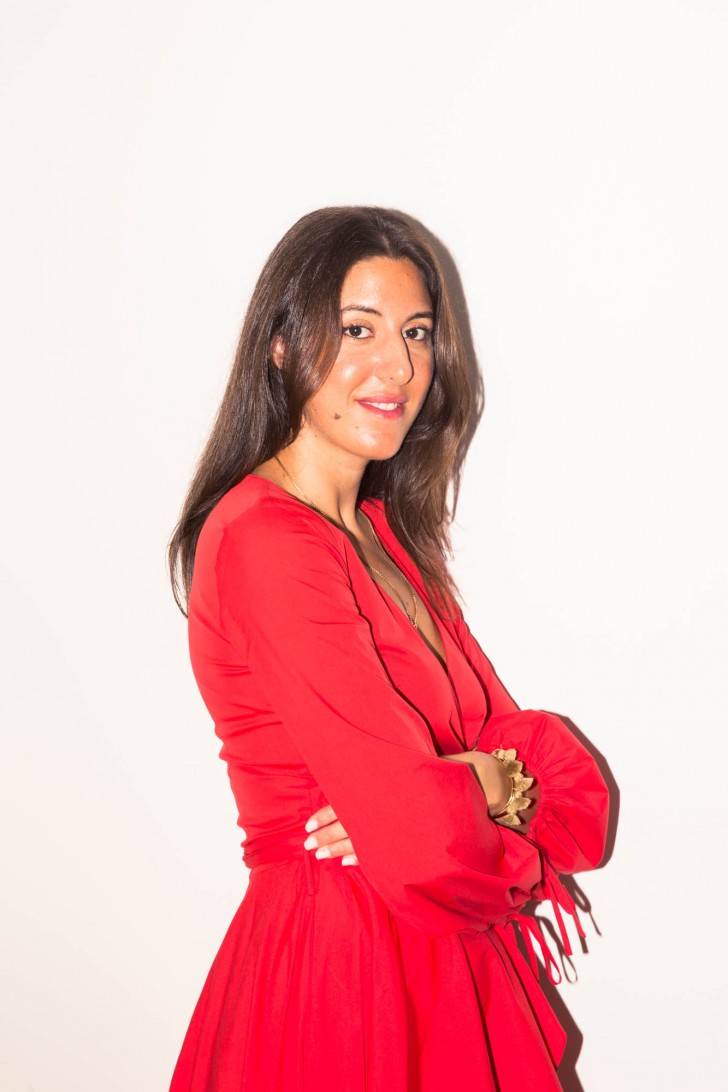 The inevitability of being copied:

“It's the kind of thing that is inevitable. Once you start to become more established and once more people start knowing your brand, they're going to be influenced, sometimes not even knowingly. They're seeing it in a magazine here and then they're trying to figure out what their designs are going to be for the season and they have this idea and they don't even remember where they saw it. I don't think that it's always intentional. When you see people are really referencing your work it just means you’ve done your job. My name is more out there than it has been in the past, and to a certain degree it’s flattering that they're excited about it as well.” 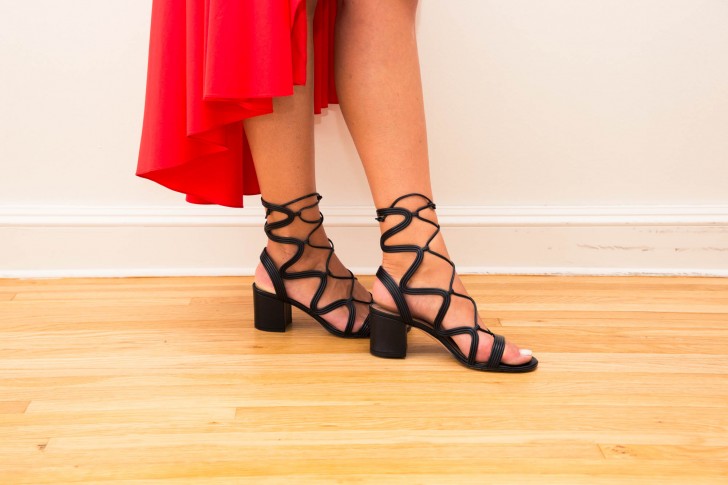 Her advice to anyone who wants to start their own label:

“Get as much experience in all facets of the business because then you're not dependent on anyone. Be educated not just about design, not just the business, not just the merchandising, and not just the press, but be fully educated in a very comprehensive way. That is the best and smartest way to have full control of your collection and your brand and ensure that it doesn't ever get out of your hands.”