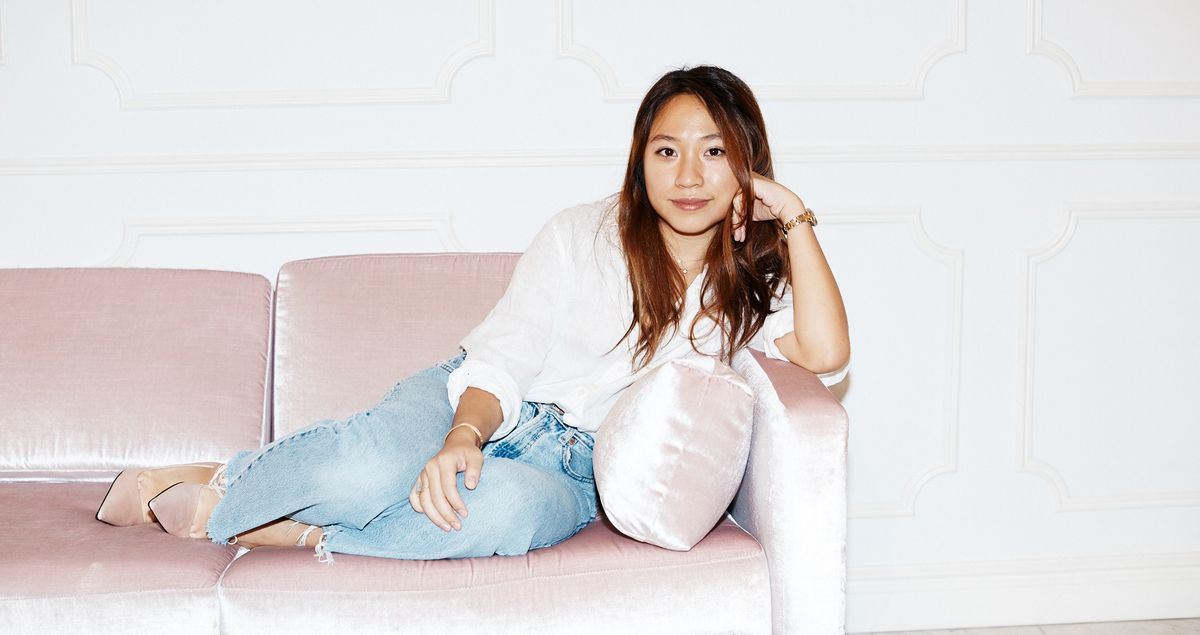 Sandy Liang Has the Most Lowkey Fashion Week Prep

Who knew it didn’t need to be a frantic race to the finish line?

Sitting in on Sandy Liang’s fashion week prep process was partly a selfish endeavor. For me, she’s one of those designers who I could happily wear head-to-toe for the rest of my life. Fluffy, oversized coats; cropped, embellished leather jackets; denim; micro florals with condom wrappers woven in (!)—the seasonless staples of her brand read like a laundry list of my favorite things. I gleefully skipped the commute through Chinatown to Liang’s studio (which you might remember from this), before finding myself sorting through rolling racks stuffed to the gills with brand new, then-unseen pieces for her SS/17 presentation. Happy place? Yes.

The one thing that was absent from Liang's studio? Any signs of the frantic holy-shit-I-have-a-presentation-in-5-days hurriedness you’d think would be too intense to ignore. Instead, Drake and Future played on the speakers while Liang deftly tended to dotting those last i’s and crossing her t’s. She filled us in on collaborating with fellow downtown business owners like Dimes, Coming Soon and Brrrch Floral for her presentation, why she prefers lookbooks to showing, and to the karaoke and tequila (same) she plans on celebrating the whole thing with.

Where her head’s at when she starts working on a new collection:

“Now that we’re doing more seasons—we did our first resort season this year—there’s an overlap [with the work flow]; but the actual process is super organic because an idea just pops into your head. You put that away into a little bank for next season, but that idea evolves and changes. My whole brand ethos is that I don’t really try to make a ‘new collection’ because it’s supposed to be ‘new’—it’s whatever I’m feeling. I always go back to the core of the brand, which is the girl, in this neighborhood, how I’m feeling, how my friends are feeling.”

On the staple pieces she’s known for:

“I love those staples, and when I started my brand, it was only outerwear. It’s such a New York thing—you need outerwear, you could wear the same clothes inside and it wouldn’t really matter. I keep those staple pieces relevant. My eye just gets tired of things very quickly, so I need to change them up. When I was doing my first and second season, there wasn’t that much of a jump, but two years down the road, what I liked in the beginning isn’t necessarily what I liked anymore. It’s interesting to see how I’m changing. It’s just intuitive for me.”

On how she actually designs her collections:

“We design piece by piece, so some of the pieces will have been thought of months ago. But then some, literally the week before [showing], we’ll be like, ‘we need that in the collection’, and we just make it. Our sample-makers hate us for this, but that’s just how it works. We don’t have a very strict timeline because it’s such a small team. We started working on this collection right after we were done with fall and resort.”

On questioning the fashion show format:

“I care a lot more about the lookbook than I do for the presentation. For me, lookbook images are what you’re going to show buyers, that’s what you’re going to post on Instagram, that’s what people are going to see. The presentation, not everyone can make it, and obviously if you have more money, a bigger budget, a bigger venue, you can do more—if you can’t do that, you’re not fully representing your idea. I don’t care to do the whole, ‘big show during fashion week’ thing. Not that it’s dated, but it’s just not my brand. The lookbook is more intimate in a way—you can internalize it however you want. It’s creating this world within an image. A presentation is just scheduling. After you’re done working on a collection, that’s the last thing you want to do.”

What she loves about the presentation format:

“It's nice to meet people and interact with them during the presentation. You hear feedback and it’s super rewarding. Also, there will be champagne during this presentation, which is a first for us!”

What she thinks of the future of fashion week:

“It’s hard to say. I feel like I’m not in it, so I do have a certain perspective. It does frustrate me how cramped everything is, the ‘oh, you can’t have it on that day,’ thing. I think that stuff is silly, and it just makes everyone’s lives a little more hectic because everyone has to be overbooked. Why does it have to be compacted into a week? At the same time, it’s a spectacle.

"I think it’s too much of a fuss. I hear everyone within the industry being like, ‘ugh, fashion week.’ It’s not something to look forward to. When I was an intern, I would be like ‘ooh, fashion week,’ and then I would hear people complaining about it. Why does everyone sound so miserable? I don’t understand.”

On putting together the actual presentation:

“The more I do these, the more I realize I don’t need to abide by a standard. I don’t need a cookie-cutter presentation. I actually think those are really dull; when you walk into a room and a model is just staring at you.”

What she’s doing differently this season:

“This season, we got this big, orange, shag rug. For me, the models always have to be sitting at least 80% of the presentation, otherwise they look so rigid. That’s not real life! We just blast hip hop music. Last season, we had a ‘cool’ playlist, and halfway through we were like, ‘nah, this sucks,’ and played Michelle [a staffer]’s iPhone. This season, it’ll just be a laidback party vibe. We’ll have a DJ, the girls will be in the middle, not just off to the side, and people can walk around.”

On the casting process:

“They’re not all ‘model’ models—a lot of them are just cool girls that I've asked, ‘are you down to do this?’ [While casting], I think about, ‘what do you do? Why do I have a crush on you?’ I have this one girl who I had a crush on for the longest time, Sabrina [de Sousa] from Dimes. When they first opened, I [would read] interviews with her, and was like, ‘I’m totally going to go to Whole Foods and buy everything [she talks about].’

"I wanted to take photographs of girls who were local, who I admired for whatever reason, like how Sabrina started her own business with her partner. It’s incredible what they’ve done. I need to appreciate the girl, not just the way she looks. I think it’s cool when I have a relationship with the model in my presentation. With this low key party vibe, the casting’s a big part of that—we want the models to feel comfortable.”

“I like getting things done ahead of time, and this is the latest we’ve ever been. We’re pretty calm. Saturday I have fittings, and Sunday, I have the presentation. Then Monday’s market with buyers. I go to Paris before the end of the month.”

What goes down the 24 hours before the presentation:

“On Saturday we’ll be doing fittings here. We don’t even have the set designed or anything…we work with Coming Soon, and we’re going to pick our furniture today, then they’ll just bring it Sunday morning to The Standard. We’re working with Brrrch Floral. Last season we did wildflowers and all different arrangements, and this season, I’m like, let’s do one color, two flowers, and a lot of it.

"I definitely try to look better than I usually do. I’ll do a SK-II mask the night before. Last season, it was Valentine’s Day, so I got two big boxes of donuts from Dough, and I split them with everyone who was backstage. I think I’ll just have that for breakfast again. And probably extra coffee.”

“We’re going to fit in some sort of an after party. Last season, we did it at Elvis Guest House. This year, I want to do it at a pizza shop, or my dad’s restaurant, in one of the karaoke rooms, with just… tequila bottles. But I have market the day after, so it’ll have to end early.”