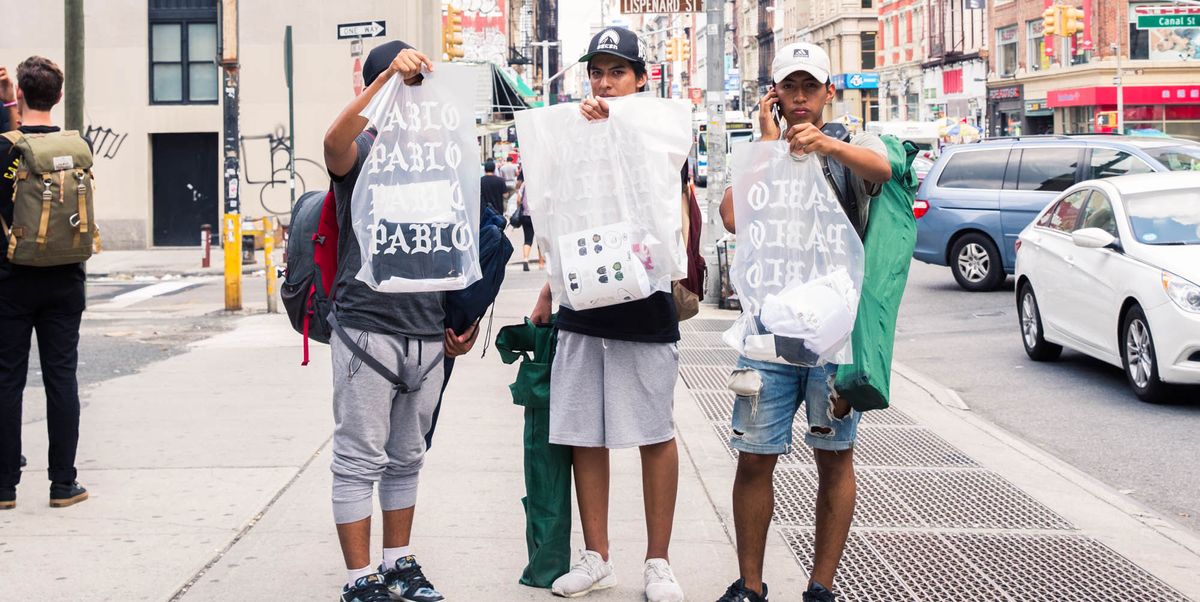 Dispatch From the Kanye West Pop-Up in New York

From the front line of *the* line.

I’m a Kanye fan. I’m going to the show at Madison Square Garden on Labor Day and I’ve seen him twice before. I don’t totally understand the obsession with the Pablo merch that people are freaking out over, but I think it’s nice as far as concert collectibles go. Unlike me, a close friend of mine, Vivian Cheung, who’s a graphic designer and moonlights as a master shopper, understands the hype. And today, when Kanye West’s weekend pop-up opened on Broadway, Vivian was there at 8 AM to join the line (the store wasn’t set to open until 10). She’s been updating me all day and her notes were so funny and so well encapsulate the energy that these pop-ups (and Kanye in general) foster that I had to share. She gamely agreed to write me notes from her spot in line and our texts are here, too. I visited Viv once in line at around 3 PM (she still wasn't in!)—it was hot AF, but she was holding out for a jacket and some t-shirts for our less enduring friends. I hope you’re as entertained as I am by this. Anything for Pablo.

Update: Viv ended up getting into the store after waiting for eight hours (!). She bought 12 pieces for six people and herself and was in the store for 50 minutes. Champion! See some choice merch below.

Thursday night in New York got me super hyped up for Kanye West's pop up shop. That morning he released the location, 393 Broadway. A resourceful shopping addict, I already started mentally planning how I'd get my hands on some Pablo merchandise.

This shopping frenzy isn't anything new to me as I've been going to sample sales for the past nine years I've been in New York. I knew what to expect. I packed a granola bar and an extra battery charger in my purse. Comfortable attire is key.

Another game changer is making friends. Luckily I was right behind the nicest couple from the Bronx, Alisa and David. David did the first Starbucks run of the morning. Alisa offered to get me an ice coffee. I was amazed how friendly everyone was. I repaid the favor by buying them a bottle of water.

The eavesdropping in line was amazing. Two guys behind me were discussing how it's essential to dry clean your Pablo merch.

At around 9:45 AM High Snobiety had started a livestream on Facebook. Everyone in line quickly reached for their phones, too. I took several screenshots and started sharing with my friends. One was my sister, who was doing the exact same thing but in Toronto. [Our friend] Chris was in line in Toronto, too. I love the way this pop-up connected all the Kanye fans on social media and IRL.

Style
More From the series Celebrity