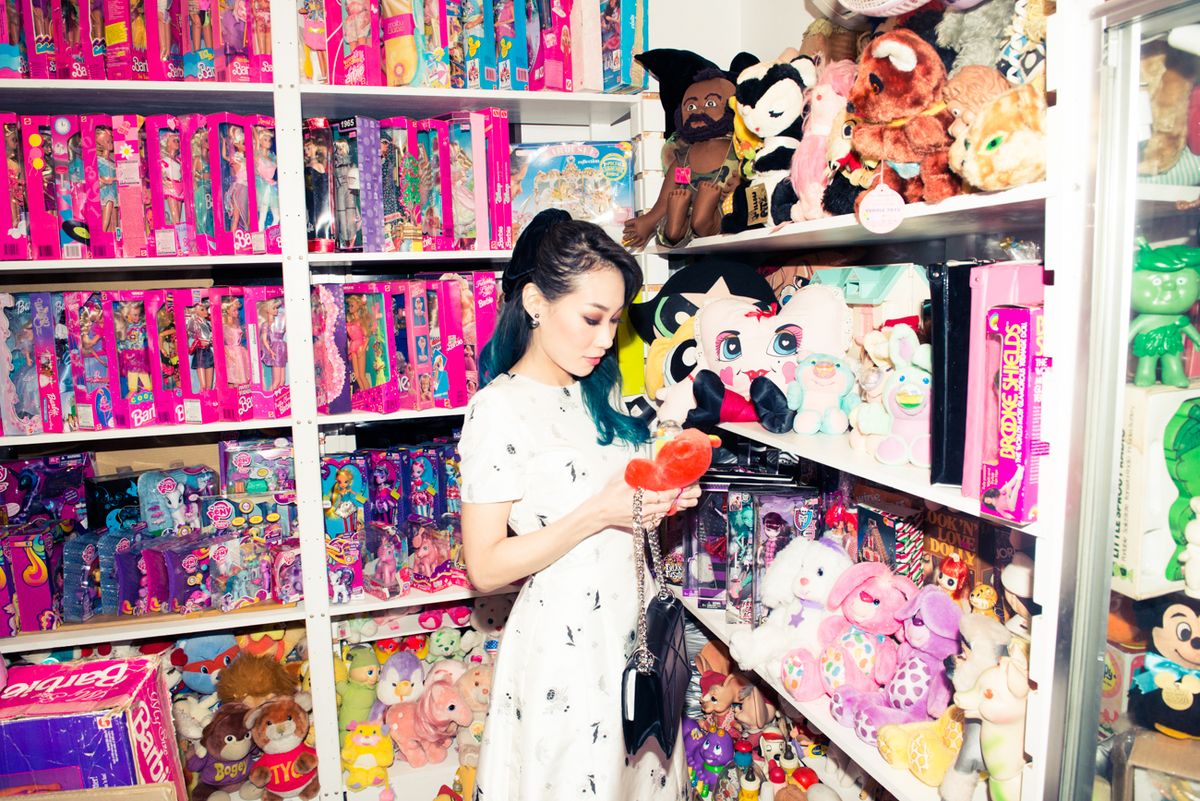 From sushi to weird toys to ramen and back again.

Somehow I’ve been tasked with the impossible: writing a Tokyo travel guide. As in, I’m suddenly responsible for summarizing a place that transcends the capacity of any list you could find on the internet and instead, stress picking my nails at my desk about it. Basically, this is my way of saying that the below in no way an exhaustive list. These, aside from the requisite spots you *have* to go to (Shibuya Crossing! So many shrines!), kind of made my trip(s).

WHAT YOU NEED TO KNOW

Right off the bat: Tokyo isn’t nearly as expensive as you probably think it is. It’s not quite as easy on the wallet as, say, Southeast Asia, but you can definitely do it on the cheap.

Also, you need to rent a Wi-Fi Egg. It’s a very small, rechargeable portable internet box that will save your life. You can do this ahead of time, or when you arrive at the airport. You pay a very, very affordable fee per day, and return it when you leave. If you take one thing away from this guide, make it this. It’ll help hugely in getting around, because they don't really have street addresses in the traditional Western sense. Fun!

Andaz Tokyo Toranomon Hills
1-4, Toranomon Hills Mori Tower
Don’t get me wrong: you can definitely take the budget-minded, staying in slightly-weird-but-clean-and-pleasant-enough hotel, AirBnb, or traditional ryokan (you can also stay in a capsule, because it’s Japan). I’ve done it, and it won’t make your trip any less of an incredible experience. But take my word when I say that Tokyo’s Andaz is one of the most incredible hotels I’ve ever stayed in. For starters, their lobby alone is on the 51st floor (!) of a high-rise near the Ginza district (more on that later). But you know the image luxury hotel that exists in your head, all fluffy, pristine beds, beautiful marble bathrooms, complete with a bonkers view of the cityscape? It's all that, and then some. They also have an incredible spa, a beautiful indoor pool with views of the city (and the Imperial Palace), and a full steam circuit.

Karaoke
I fell into a small k-hole Google-ing weird themed karaoke bars in Tokyo and feeling really bad about missing so many, but I’m here to tell you: Big Echo is a mammoth chain of karaoke places that’s pretty much inescapable and a fail-safe option when the urge hits. You rent it out by the half hour or hour, and they call you (!) on the phone in your karaoke room to ask if you’d like more time when it’s up. Which you obviously do. You can also use this phone to order beer, which I thoroughly enjoyed. Basically, they have the whole karaoke thing down.

Akihabara
If you want to experience the version of Japan you see in movies (bright lights, so many noises, inexplicable singing, weird stuff), save an afternoon (or day?) to wander around this neighborhood. It was the hub of the electronics boom, and now caters to Japan's obsessive fan culture—which, yes, means you’ll walk by a bazillion four, five and six story stores that solely sell anime figurines. Plus another dozen shops filled with vending machines full of toys. Also a thing: maid cafes. Google it.

Don Quijote
4 Chome-3-3 Sotokanda, 千代田区 Tokyo 101-0021
If you’re not feeling overwhelmed yet, go to Don Quijote’s Akihabara outpost. Take the million flights of escalators up to the very top floor, which houses an arcade. Just trust me on this one. It’s fucking crazy.

Robot Restaurant
160-0021 Tokyo, 新宿区Kabukicho, １−７−１
Also fucking crazy: the Robot Restaurant. It’s super tourist-y, yes, but you just have to do it. I can’t really articulate this one. You can try and watch YouTube videos, but it’s not the same. Don’t buy the dinner, but bring cash for shochu and popcorn. Go early with as few expectations as possible to soak in the lobby and elevators and insane staircases (and get a good seat). It’s all very “only in Japan.”

Restir
〒107-0052 Tokyo, Minato, 赤坂9-6-17
Maiko Shibata's the Creative Director here, and the result looks not unlike the contents of her closet: incredibly curated and cool.

Omotesandō Neighborhood
Want to feel like you're getting an education in architecture while window-shopping? Good! Because that's what you’ll get here. This street houses the most incredible luxury flagships, designed by the likes of Herzog & de Meuron (Prada) and SANAA (Dior) to name a few. Also, stop by Kiddyland, an overwhelming toy store, and Laforet, a huge department store for good gift shopping.

Takeshita Street
1 Chome Jingumae, 渋谷区
This might be obvious, but Harajuku’s Takeshita Street is a must for a million cute little boutiques where you can get things you’d find pretty much nowhere else.

Sushi Bar Yasuda
107-0062 Tokyo, 港区Minamiaoyama, 4 Chome−2−6
Hear me out. I know you’re all, “I didn’t fly all the way from New York just to eat at Yasuda!”. Calm down, because you’re in Japan and freaking out isn’t really “done” there. Yes, there’s a certain sushi restaurant that was featured in a documentary that you think you should go to. Guess what? Everyone thinks that and you probably won’t get in unless you, like, kill someone. Yasuda is every bit the incredible, authentic sushi experience you’re looking for, only Mr. Yasuda, who now resides full-time in Tokyo, also chats with you the entire time you’re there, asks if there’s any fish you’re averse to (considerate!) and will take a picture with you once you’re done and FLEX (!) his muscles while he does it. He also may have thrown shade at the aforementioned, nameless, very famous sushi restaurant while I ate there for being over-hyped and taking a hit in quality. Just saying.

Shomben Yokocho
160-0023 Tokyo, 新宿区Nishishinjuku, 7−13−12
This translates to ‘Piss Alley’ (!). Which is incredible. Even more incredible is all the yakitori you're about to eat, while you sit on a tiny bench in a cramped, smoke-filled restaurant that only seats a dozen people. There might not be an English menu, but that's probably better because you're going to eat things (liver, gizzards, hearts) that you might not want to think about. They also do grilled veggies, too.

Kyushu Jangara
101-0021 Tokyo, 千代田区Sotokanda, ３−１１−６
I truthfully ate so much ramen in Tokyo it’s all kind of a blur. But I remember eating here on my very last day and it was exceptional. They have a few different locations, and Chrissy Teigen’s a fan, which I find really validating. It’s also, like, $10.

Tsukiji Fish Market
5 Chome-2-1 Tsukiji, Chuo, Tokyo
You are going to eat sushi for breakfast after attempting (maybe successfully?) to get into the sushi auctions at the crack of dawn. And you’re going to love it.

Ichiran Shibuya
〒150-0041 Tokyo, 渋谷区Jinnan, １−２２−７
Again—a lot of ramen happened, so I’m fuzzy on the details. But this place stands out to me because it was 1) incredible 2) the first place I experienced what I can only really call ‘ramen jail.’ You place your order outside the restaurant at a vending machine or fill out a form (standard), before sitting down at a personal booth that doesn't really allow for interaction with anyone else. After five minutes, from the other side of your booth, a pair of hands will pop out and place ramen in front of you. See? Ramen jail.