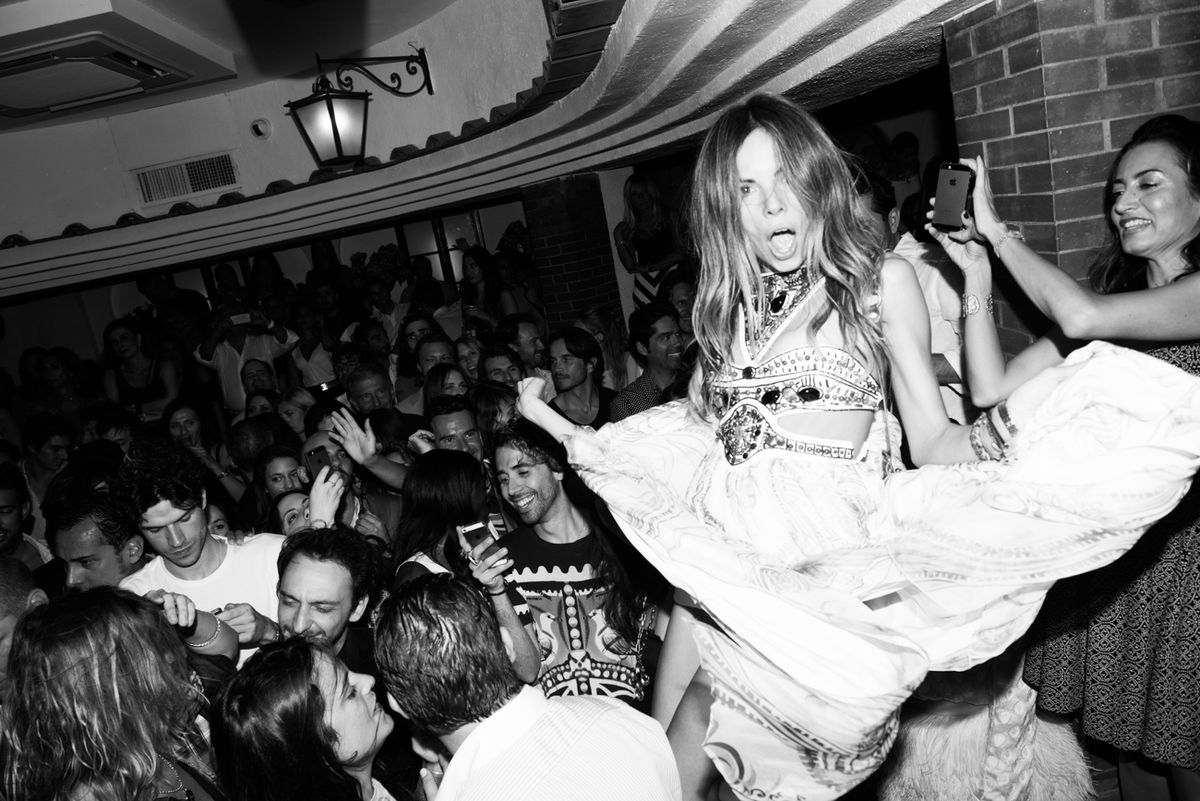 How To Un-Basic Your Bachelorette Party

Yup. I said it. Somebody had to, and since I prefer destroying bridges with dynamite (as opposed to slowly burning them), that someone might as well be me. So pull up a chair, kittens, it’s time we had a chat.

Here’s the situation: The hallowed tradition of the bachelorette party is currently in a crisis of basic-ness. Vegas trips, bottle service, male strippers, crusty limousines and mandatory bridesmaid hashtags, it’s enough to make a grown woman eat glass. I don’t know about you, but I have had enough of this fuckery.

Now, before I go any further, let me just say this: I have zero problems with being basic. I love Starbucks, yoga pants, spinning class and highlights just as much as the next bitch. I also go through green juice like you would not believe (it balances out the Marb Lights). So this isn’t a ‘hate’ on being basic. Rather, it’s a call to action.

"Once engaged, everyone magically decides that partying Paris Hilton-style whilst wearing penis paraphernalia is the only way to celebrate. Did I miss something?"

If you love limo rides and champagne bottles that arrive lit up with fucking sparklers, more power to you. My issue is that for some reason, friends who NEVER enjoyed these activities in the first place are suddenly signing up to participate in them en masse. Once engaged, everyone magically decides that partying Paris Hilton-style whilst wearing penis paraphernalia is the only way to celebrate. Did I miss something?

When my girlfriends were single, they weren’t running around in clubs wearing body-con Hervé Leger knock-off dresses and dancing to David Guetta. But come bachelorette season, suddenly this is what a ‘fun night out’ is supposed to entail!  The whole thing is bewilderingly fucked up.

None of this would be an issue for me if I felt these plans were something the bride really wanted to do. But instead, it seems like everyone is falling in line with what certain Bibles of Basic-ness tell us a bachelorette party should be. A recent perusal of Cosmopolitan.com informed me that no bach was complete without the following party favors: penis headbands (“Glitter Pecker Boppers!”), penis shot glasses (“so classic, so hilarious!”), and penis whistles (“give them a good blow!” says Cosmo.) Yeah. How about no.

"Channing Tatum is not going to show up to your party, and there is no guarantee that you will be impressed with the guy who does."

Now, at this point in the article, you are probably reacting in one of two ways: either you are a former bachelorette and drafting up some hate mail, or you are nodding your head like crazy and hollering “PREEEEACH!” Because I am SO. FUCKING. RIGHT. ABOUT THIS.

So why do we keep letting this happen? Here’s my theory: I think we stay silent because our friends are awesome, and we can have fun with our crew pretty much anywhere. I know this better than anyone. My friends and I once spent a night sleeping in a park in Barcelona (#backpackingprobs), and despite the crack dealers we encountered, we still had a blast. More recently, I had a good laugh with my roommate at the emergency room while she lay in bed with an IV stuck in her arm. (That incident was not crack related, btw). Good friends can have a great time anywhere, but that is not an excuse for a shitty itinerary. We can do better!

HOW TO AVOID A BASIC BACHELORETTE:

Enough With The Limos

The last limo ride I enjoyed was when I was eight years old and going to a funeral, because 1) I am an asshole, and 2) the novelty of riding in a one wears off at about age nine. Limos haven’t been cool since the nineties. They are crusty, overpriced, and make no sense in the age of Uber. Also, my personal experience suggests that limos bring out the worst in people. There is always the one chick who insists on randomly yelling “Woooohhh” while hanging out the window. This will no doubt be followed by, “Turn it UUUUP!” when Beyoncé comes on the playlist. For the love of God, don’t be that girl.

Okay, so you want to wear a “Sophie’s Bach!” shirt? Some things to consider first:

PRO: You give random dudes an excuse to talk to you.

CON: You give random dudes an excuse to talk to you.

If I had a dollar for every basic bachelorette party I got invited too, well, I’d still be completely fucking broke. Because not only do these evenings take an emotional toll, they cost a fucking arm and a leg. Bachelorette planners need to keep in mind that everyone is on a different budget. I recently attended a bachelorette party with a former roommate who is adorable, awesome, and also happens to be very, very rich. When we met, we were similarly drunk undergraduate students with college loans. Ten years later, I am still a broke student (#fuckyoulawschool), while she is a Mercedes-driving private club member with a chandelier named Clarissa. Yes. She named her chandelier. I am told this is what people who shop at Restoration Hardware do. Anyway, we are clearly at different financial stages in life. Thankfully she was considerate about this, but not every bachelorette is. Keep your broke buddies in mind!

If you have read this column long enough, you will know that I am generally very open-minded when it comes to random encounters with naked men. Male strippers, however, are a whole different ball game. Before you jump on this dick-wagon, a few things for you to keep in mind. First: they can’t all be winners. Channing Tatum is not going to show up to your party, and there is no guarantee that you will be impressed with the guy who does. Second: it always gets weird. The cock WILL come out, and when it does, it WILL come dangerously close to someone’s face. Please don’t ask me how I know this. Finally: Someone always takes pictures, and someone else always cries while asking for the pictures to be deleted. You have been warned.

Tread carefully here, my darlings. Destination bachelorettes can be a recipe for disaster, especially if the invitees are not close friends. For me, spending a weekend with a bunch of bridesmaids I don’t know is nothing short of terrifying. I would rather spend my spare time doing something much less panic inducing. Spending a weekend attending at an NRA convention, for example. Surviving a destination bachelorette (Vegas! NYC!) requires amazing amounts of both energy and valium. Unfortunately, I am currently in short supply of both. Not to mention the money issue. If you must travel, let me leave you with two rules:  First, go somewhere interesting. If you do have enough money to travel, use that shit wisely. Check out San Sebastian, Prague or Tulum. I am not dipping into my retirement fund to fly to fucking Orlando, and neither should you. Second, DO NOT wear team outfits to the airport. I REPEAT: NO BACHELORETTE GEAR ON THE PLANE. I refuse to explain this one. You people are animals

Let’s get real: No one wants to end their night at club surrounded by a bunch of white people singing along to Jason Derulo. But that is EXACTLY what happens when you rock up to a place that offers bottle service. Okay… maybe it’s not guaranteed, but your risk factor just increased exponentially. That factor in and of itself should be a good enough reason to keep this off your agenda. On top of that, ordering bottle service is a really good way to get sloppy fast, which is obviously not cute. It’s the ‘Tragedy of the Commons’ realized! Everyone pays the same amount and everyone wants to get the most alcohol out of her contribution, so you plough through the $350 bottle as quickly as possible. Wanna know how this ends? With you. Sitting drunkenly in a corner. Wearing a penis hat.

I want so much more for you, my loves.