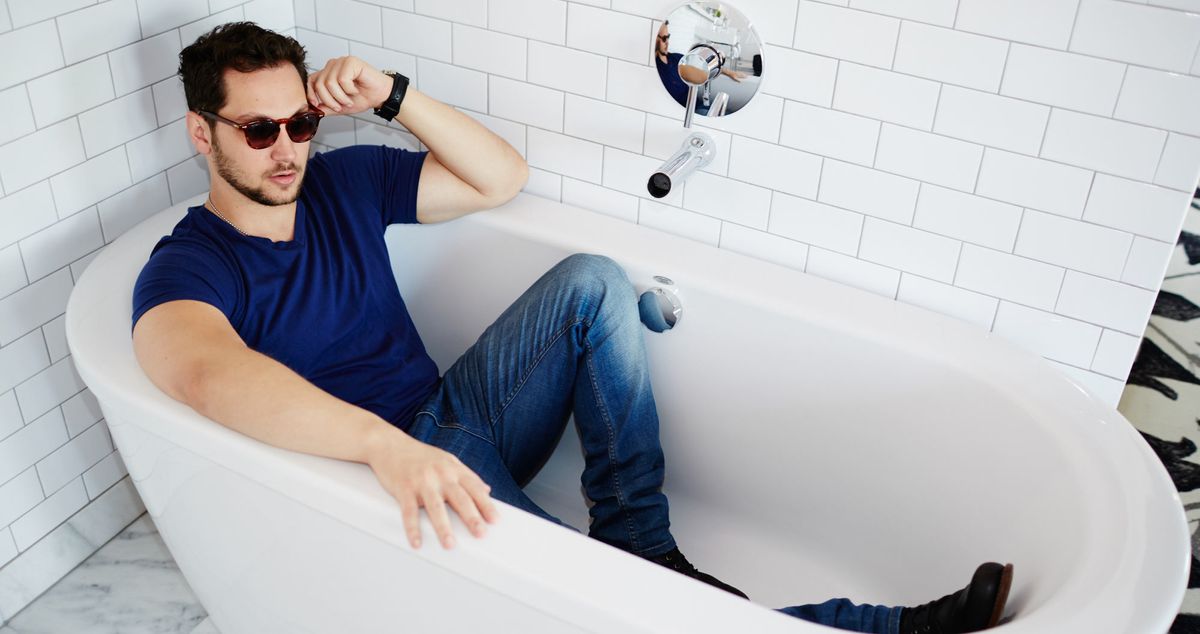 The actor on rape culture, Shondaland and why he identifies as a feminist.

We’re going to be honest here: we’re not even going to try to write an introduction that will quite do the below interview justice. Because we just can’t. Matt McGorry, who you’ll recognize from his roles in Orange is The New Black and How To Get Away With Murder (unless you live under a Netflix-less rock), and his headline-making tweets, has a certain way with words. So much so that he’s made quite an impact (not without a bit of backlash) with his activism for a myriad of social issues—most notably feminism and equality. But his outspokenness isn’t relegated strictly to social media—he's stood alongside the likes of Gloria Steinem and Joe Biden to open up discussions around rape culture and marginalization, too. And so when we sat down with him at our new favorite, Mama Shelter LA, to talk about his definition of male feminism, how his colleagues (ahem, Shonda Rhimes, Laverne Cox) inspired his advocacy, and what really makes Mother's Day special, we were pretty much blown away. So with that, we’ll let him take it away.

HOW HE FIRST GOT INVOLVED WITH GENDER EQUALITY ISSUES:

“There were three different experiences which flipped the switch for me: the first was reading Sheryl Sandberg’s book, Lean In. It was the first time I was exposed to the harsh realities women are faced with in the home and in the workplace, personally and systemically. And it included the definition of ‘feminism,’ which, unfortunately, I hadn’t understood was really as simple as all genders having the same rights.

At the time I was reading the book, I was also dating a woman who was fundraising for her new business. Her experience was, more often than not, that potential male ‘investors’ were looking for a romantic or sexual relationship rather than an investment opportunity with a woman at the helm. Accepting that women should have to endure sexism and misogyny wasn’t something I could live with, so the experiences she shared with me were truly catalytic.

The final, and perhaps most pivotal moment, was watching Emma Watson’s rousing speech at the launch of the United Nations’ HeForShe campaign. The goal of the initiative is to encourage men and boys to become ‘change agents for the achievement of gender equality in our lifetime,’ and Emma’s call to action at the end of the speech, ‘If not me, who? If not now, when?’, changed the course of my life.”

THE IMPORTANCE OF MEN GETTING INVOLVED:

“I’ve learned that there are actually some men who care passionately about women’s rights but still too few, and even fewer who are moved to action. This is compounded by most people in positions of power being male and not understanding these inequities. And it shouldn’t be women’s responsibility to educate men about feminism. One of the opportunities I and other men have to be a good ally is to invite our peers into the conversation. Because if there were as many men as passionate about gender equality as there are women, we’d be well on our way to achieving it.”

"It shouldn’t be women’s responsibility to educate men about feminism."

THE DIFFERENCE BETWEEN FEMINISM AND GENDER EQUALITY:

“There have been so many! Things have really snowballed over the last year, but here are three that come to mind:

First, I realized the importance of men as allies. Before that, I never went out of my way to educate myself about how endemic gender injustice is. But the more I read, the more resources I came across. And the more I thought and talked about it, the more people, especially women, wanted to talk about it too. Since I’ve become actively and publicly engaged, I’ve been shocked by how many of the women in my life have experienced sexism and misogyny in such profound ways. And I think it’s because often, other men in their life, shy away from talking about or thinking about it, that they wanted to share those stories with me. Prior to becoming an advocate, I hardly ever heard about these things happening. I think that’s a real testament to men’s ability to turn a blind eye to the realities women face every day, and a glaring reason for them to be a part of the movement for gender equality.

Secondly, I’ve learned how important it is to listen; to realize this isn’t my movement to lead, and, third, to to be keenly aware of how intersectional and inclusive this work needs to be. An anecdote, which speaks to both of those points, is from something I posted on social media about a project called Get Cliterate. It was about how the clit is essentially another version of the penis, but unlike the penis, we don't talk about it ever; in big part because of the stigma around women's sexuality and how it's shamed. When I posted something about it, I said that every woman with a clitoris deserves an orgasm as much as every man with a penis. The backlash, which ranged from me not being inclusive to me being transphobic, was swift. But the reality is that people were right to point out that not every man has a penis and not every woman has a clitoris. I felt really defeated in that moment, but a friend of mine pointed out that if I wanted to walk the inclusivity walk it was good for me to hear and incorporate their feedback. It was an easy fix and a number of my followers told me that it meant something to them that I was willing to incorporate their feedback and understand that greater inclusivity would be better. It was an important reminder that to be a good ally my number one job is to listen.”

WHY GETTING INVOLVED IN THE IT’S ON US CAMPAIGN WAS IMPORTANT:

“The “It’s On Us” initiative is an awareness campaign to help put an end to sexual assault on college campuses by asking men and women across America to make a personal commitment to step off the sidelines and be part of the solution. I got involved because I believe men have to play an active role in taking a stand if things are going to change. Vice President Biden has set a powerful example by inviting all genders to do their part in shifting our culture. It can be easier to say “boys will be boys,” excusing inappropriate and sexist jokes and behaviours but it takes courage to stand up and say “that’s not okay.” If we aren’t doing that with each other, then we are leaving women , who are far likelier to experience sexual assault than men, to deal with it on their own. That’s unacceptable.”

HOW HIS ROLES INSPIRED HIS ACTIVISM:

“Yes, though, for me, it was an entire lifetime of circumstances. The way my parents raised me and the lessons they taught me were instrumental in what is now a passion for justice. Even though specific words like feminism and equality weren’t a part of my lexicon growing up, the way they raised me placed a value on those things and greatly contributed to where I currently am.

Seeing inspiring advocates like Laverne Cox and what she’s done for the trans community, as well as volunteering with the cast of Orange Is The New Black for the Women’s Prison Association, were early events that likely had an impact on me, even if I didn’t know it at the time.

After we filmed Season 1 and it was released, much of the press surrounding the show focused on the diversity of the cast. Because I grew up in New York City and went to relatively diverse schools, and because I was looking at the show through my own straight, white, cisgender eyes, it had never really sunk in for me how few opportunities existed for people with a different sexual orientation, gender, and/or race than my own. It took viewing the show through other people’s reactions to it, to make me realize just how significant those inequities are. And how groundbreaking it was for as a trans woman, like Laverne to be cast as a fully-realized, complex character.

The most recent “aha” was due to joining the cast of How To Get Away With Murder. Knowing the show’s creator Pete Nowalk is passionate about social justice too freed me from fearing I would be risking my job by speaking out about the things that are important to me. If I’d had been working on a show that was heavily steeped in sexism or racism, it’s hard to know what my path might have been. That Shondaland is already such a groundbreaking place for all things race, gender, and sexuality is a revelation. I couldn’t imagine a better work culture. And if anything, being on a Shondaland show made me feel more obligated to raise my voice.”

"If I wanted to walk the inclusivity walk it was good for me to hear their feedback."

“This is going to seem like a pretty lame answer, but my family really isn’t very big on celebrating holidays or gift giving. We’ve always valued spending time together much more. This past week, I had the opportunity to visit my parents in Florida for a week and we got a lot of high quality parent-son time in. As far as a mother’s day gift goes, I know that made her, and I, happier than any gift I could have gotten her.”

WAYS TO GET EDUCATED:

“Read: the internet is always available and it’s an invaluable resource for learning about social justice issues. That said, one thing I do feel like it’s important to point out is, it’s never the responsibility of a person who belongs to a marginalized group to educate those in the privileged group about the discrimination they face. While it may take more time and energy to do our own research, if we care enough to understand discrimination, we should care enough to invest time in educating ourselves about what that really means and how complicit we may or may not be.

Listen: That said, when you are engaging with people from marginalized communities about the disadvantages affecting them, the best way to educate yourself is to listen. I will never understand nor be affected by racism or sexism in the way(s) I would if I were a woman and/or person of color. To imply that I am does an enormous disservice to the people and the work.

Don’t Make Assumptions: Regardless of how much you’ve studied the issues, no matter how passionate you are about any given issue, don’t assume that anyone owes you their time, insights, or anecdotes. Even if you think that you’re being helpful by asking someone about their experiences with discrimination, you should be sensitive to the fact that they may not want to have that conversation with you. Respect that.”