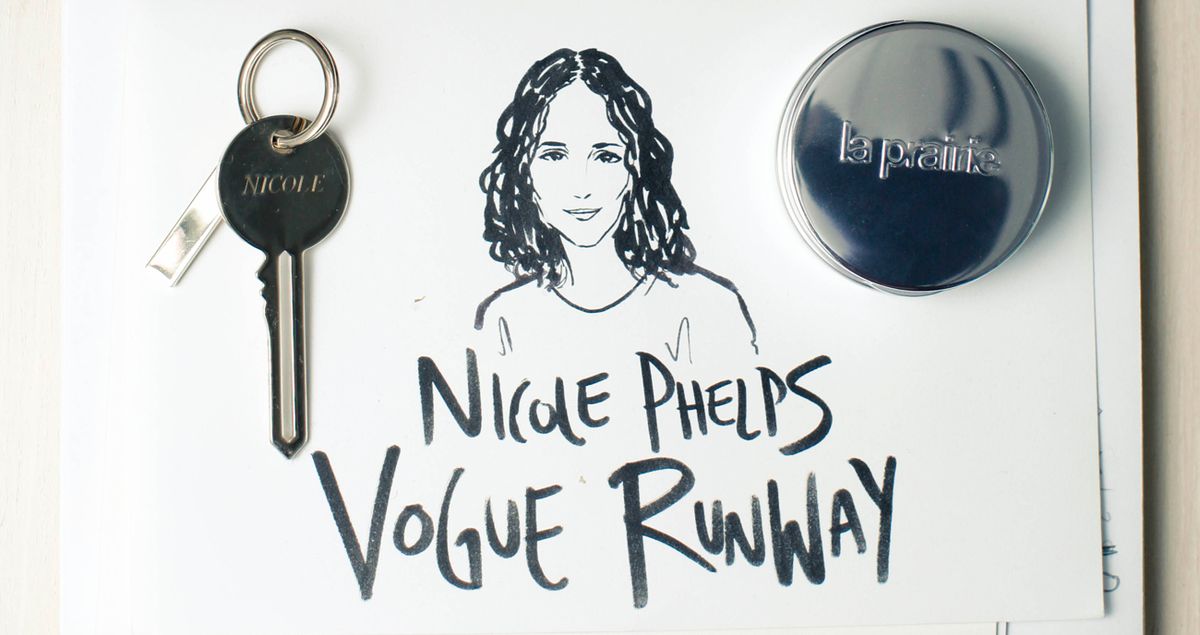 How a Vogue Runway Critic Does Fashion Week

Nicole Phelps on writing five reviews a day and the value of a quality margarita.

This fashion month, we wanted to take a closer look at how people working in all different parts of the industry experience the insanity, whether they’re front row, behind the scenes, shooting on the street or working in the studio. We've already got the buyer, designer, fashion publicist and street-style photographer’s perspective. Here, Nicole Phelps, the director of Vogue Runway, who spends the whole of fashion month watching and writing about the shows, talks about how she does it.

Fashion month (all six weeks of it) ends today—and by this point, pretty sure we’ve established that it’s a lot of work across the board, no matter what your role is. When it comes to being constantly productive, however, Nicole Phelps might take the Louboutin-topped cake. Here’s the deal: while Phelps is running the most influential website in runway reporting and criticism, she’s also writing four or more (!!!) reviews a day and attending at least that many shows. That, friends, is a marathon. Herein, how she does it all (hint: a little tequila helps).

On an “average” day during fashion week:

“I rarely get to sleep before 2 AM when I'm reviewing shows, so I try to stay in bed as long as I can. In New York, that's around 7 o'clock, time enough to make my son breakfast and pack his lunch before scooting him off to school. I like to look over the site before I get ready, and I'll top-edit any reviews that came in after our night shift genius, Hamish Anderson, has signed off.

All day long, I'm going to shows and filing reviews; in between, I'm editing reviews by our other writers, choosing images for Vogue Runway's landing page, and responding to emails. In Milan and Paris, it's relatively quiet until about 1 pm (7 AM NYC time); after that, it's nonstop triage until midnight (6 PM NYC time). We're always happy when the weekend comes so we can focus on what's in front of us (the shows!) rather than splitting our brains between the shows and what's going on back in the office.”

On her travel essentials:

“My husband gave me Bose noise-canceling headphones two Christmases ago, and I never forget to pack those. You don't realize how loud plane engines are until you've worn them. An eye mask and a travel blanket are also essentials for overnight flights. I bring my iPad mini to FaceTime, a car charger for my phone, and a bag full of European plug adapters for the hotel room—pretty standard stuff. I always have some euros in my wallet so I don't have to get money out the minute I land.”

On the shows she most looks forward to:

“Balenciaga is this season's most anticipated show—it'll be a big moment for Demna Gvasalia. With the empty creative director spots at Dior and Lanvin, other Paris brands will get a bit more of the spotlight. I've liked Julien Dossena's Paco Rabanne collections since his start there, and I'm curious to see how the Courreges boys follow up their really excellent debut. Back here in New York, I'm rooting for Peter Copping, who had a breakthrough collection at Oscar de la Renta last season.”

On how fashion week has changed:

“In many ways [fashion week has] remained the same. I wrote my first review for WWD—Anna Sui, if I remember correctly—in 1997. But in others, it's changed a lot: there are so many more shows now and they've become such spectacles with celebrities everywhere—not just in the front row but also on the runway! I don't find myself at presentations on Avenue B as often as I did in the late '90s and early '00s.”

On the role of Vogue Runway during fashion week:

“I say that Vogue Runway is the premiere destination for fashion shows online. We post them faster than anywhere else and in more detail, and we have some of the best critics in the business analyzing them.”

On how she keeps going:

“A girl's got to eat; things start looking pretty dour if I don't get lunch. I like to take a box of Kind Bars with me to Europe because it's sometimes hard to stop for food. Also: It's bad news for me that high-heeled knee-high boots are coming back; a flat shoe makes a long day and night of shows a lot easier to get through.”

On what stresses her out:

“Any day when I have five or more reviews is stressful. Four is the magic number.”

On her favorite part of fashion week (other than the shows):

“Reuniting and catching up with friends that I rarely get to see outside the shows.”

On her fashion week rituals:

“I'm a little short on rituals in Milan—it's such a short week—but if I don't make it to Panino Giusto for the prosciutto, brie, and tartar sauce Jolly sandwich I'm disappointed. My former Style.com colleague Marina Larroude, who is now at Teen Vogue, and I used to go as much as we could. In Paris, I'm a regular at Le Castiglione. Predictable, I know, but I like it. At the end of the season, I do two things: first, book a massage—a month spent sitting on metal benches and hunching over my iPhone wrecks my back. And second, take my husband and son out for Mexican. It’s very hard to find a decent margarita in Paris. And avocados? Forget it.”