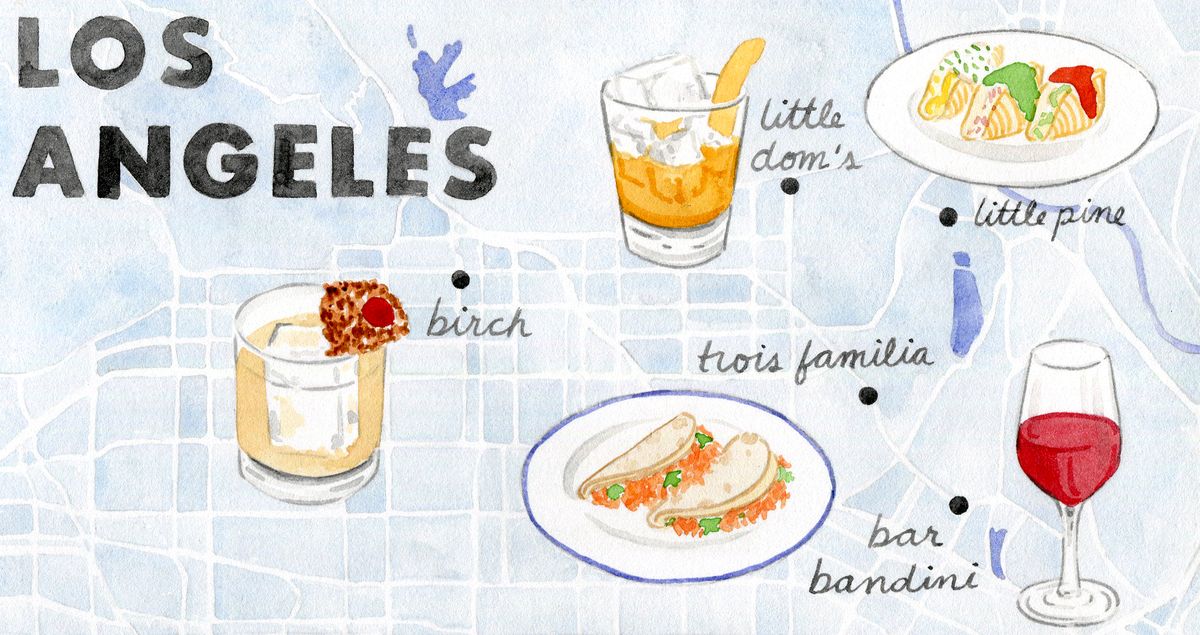 Remington Guest
Illustrator:
Meghann Stephenson
Because candy cane martinis are truly disgusting, we've enlisted Remington Guest (the man behind The Cheap, The Best & The Hidden—follow him on Instagram here) to put together his guide to the best bi coastal spots for holiday dranks. Here goes nothin'. Oh, and read the New York edition here.

HOLIDAYS. For some reason, when I think of the holidays, I think of A Very Murray Christmas; which I guess is cool, but also dope marketing by Netflix, I suppose. I'd love to go to everything on this list with Bill Murray and parts of the cast. We could wear cool sweaters and start weird rumors about people in Hollywood. I wonder if Bill Murray likes holiday cocktails; which is the point of this story anyway. You’re in L.A. Boom, I got you. You’re in NY. Boom, I got you. This list is all about holiday cocktails, and some of the restaurants you should be dropping into your group texts with Cheryl and telling Susan; even though Susan doesn’t live anywhere near you and will probably only want to talk about Justin Bieber anyway. But this list is for YOU. So let's get into it.

I’ve got a secret. I’m not the most excited person when it comes to seafood. Like, I love it, it's so clean and light, but I'd almost always rather just get a burger somewhere. Being basic is very 2016, so I’m on trend, which is cool. But SMYC is a lit restaurant. Full disclosure, I had eaten In n' Out on my way to the review. I had skipped lunch and needed something, and then the In n' Out I ended up at was super sus! Even after having a full dinner, I ate everything that landed on the table with finesse, fam. Real finesse. I was like Scott Hamilton circa when he was crushing the Olympics. Needless to say, go to SMYC, sit in the indoor patio, and stay gold.

Tip: The lobster toast with burrata is a must.

The feast of the seven fishes is happening at Mare. The homie Eric Greenspan has put his special twist on the feast, so it’s the perfect time to draft politically correct responses to crazy questions and comments your family might ask you when you’re home for the holidays.

Tip: do whatever Chef Greenspan says and there is no such thing as a ‘fun drawer'.

I’ve said it before and I’ll say it again, I think restaurants with weird hours, or ones that are just closed on certain days of the week for no reason, are super baller. They’re almost always some of the best places too. It’s like all the dopest restaurants get together and are like, 'we need to randomly close on Tuesday', or 'we’re only open from 10-3 P.M. like Trois Familia. Such chic hours. You really have to be living that unemployed L.A. life to be able to eat here. Mid-work day only, that's some very specific heat they’re throwing.

Moby back? Yes he is, with more vegan than ever before. Scones, cashew lattes, grilled cheese without the cheese. It’s a treasure trove of vegan treats. This is the perfect time to break out that turtleneck with those really clean glasses that give you a discerning art guy look. I can see it now. You're such a vision, eating your grilled cheese with a knife and fork, silently judging the globe around you. So silently.

Want to know a secret? I’m listening to the Biebs' "Love Yourself" on repeat, and have been for the last 3-4 hours as I write this. Do I feel slightly weird about it? Yeah, but also this rad feeling of empowerment. Also, when it comes to West Coast BBQ, there is no other place to be other than Maple Block Meat Co. It’s the holidays and you’ve let it go anyway (SHABBA), so cruise in with the whole fam squad looking like the Royal Tenenbaums in some tracksuit shit and throw down while being the weirdest, most sophisticated table in the joint.

Otium is a very chic establishment. I’m considering buying and wearing this equally chic Raf coat to the restaurant and hoping they eventually install a floor or wall with the same pattern. I could lay down on the floor for a wild 'gram. Find me at Otium for brunch, eating pork belly, truffle butter, French toast with a dad hat pulled so far down even I’ll barely be able to see.

I have this thing with butter, and so I automatically have this weakness for hot buttered rum. SMYC is going with a COLD buttered rum which is, well, life. I remember being about 12 years old on Christmas Eve one year, and I was so ready for the next day, really turned up to the max. There was no coming down. My mom gave me some hot buttered rum thinking it would calm me down, but it sparked something deep inside me that was like, I’M AWAKE FOR THE FIRST TIME.

You need exactly zero more reasons to be at Mare, but I’ll give you one more: hot wine (technically, Vino Caldo: a hot cocktail of red wine, vodka, pear juice, muddled orange and pear, infused with orange peel, cinnamon and black pepper). I have a strange Swedish friend who got me onto this. Mare’s is better plus you get to be at Mare which is a victory in itself.

The Walker Inn is already my favorite bar in L.A., and now they’ve got an apple-themed menu which reminds me of the days I used to go apple picking with my family upstate. I was always laser-focused on the little activities area at the orchard. Not for the activities; I don’t do those. I’m talking about the most on-point apple cider, apple cider donuts, and pizza. I think about this pizza EVERY GOD DAMN DAY. In short, apple picking was cool because of pizza.

It’s called the #5. It’s cranberry. It’s vodka. It’s not the Greenhouse/Avenue kind that that one girl at your table five years ago dumped on you immediately after the promoter handed it to her. I sort of want to leave it at that.

Sotto has a sick cocktail called apples to apples. I love apple cocktails, very very obsessed with them. I also love Martinelli's, which BTW, Whole Foods is having a banging sale on at the moment. I remember a few weeks ago I bought some Martinelli's on sale from Whole Foods; I was really trying to get ahead of Thanksgiving. So proud of myself, planning ahead, and having the control to not pop bottles at midnight every night with my nightly frozen waffle and coconut ice cream. Then I wasn’t even in L.A. for Thanksgiving, which is where I left them so never plan ahead, because you just never plan ahead because you just end up buying Martinelli's for other people.

Cardinal punch. At Redbird. Get one and think about how rad it is you’re eating at a restaurant with a retractable roof in December.

Love, love, love Little Dom's. I remember having a super fun night here that involved a four hour walk from the hills in Silver Lake. BUT I’M NOT HERE TO SHARE PERSONAL STORIES, FAM. Go get a butternut squash Old Fashioned here and make some stories of your own.

The first time I went to ERB, there was a corporate event and it was going OFF. It nearly ruined it for me, but then I got a biscuit with butter and everything was cool again. Then my friend got a flat tire when we left, so I let him deal with it and Uber'd home. So get a cocktail and biscuits, because the other two probably won’t happen. Tip: The food is insane here. Stay woke on the entire sitch.

Sit at the bar, get a french dip eclair and send me a thank you postcard because I miss getting postcards in the mail. Tip: Get a Chi Chi for two, which isn’t technically a holiday cocktail but insanely festive. I ignored the “for two” and drank one by myself, but just think how cool you’ll look drinking out of a huge bronze pineapple filled with enough liquor for two people.

I like establishments that feel like they’re kind of closed, like Sonny's. Keeps people away. It’s small and easy to miss, which is great. Get a drink on the back patio, or if you’re freezing all the time make everyone sit inside and complain about how cold it is outside. Your friends will love you.

Someone told me they had a dream about me and I was wearing this velvet-blazer-but-not-a-blazer sort of thing, and that I looked really good in it. I don’t know what this rare garm was, but I want to wear it, plus matching velvet pants, to the Normandie Club. I'll post up in a corner with some slightly tinted shades, enough so you can’t quite see my eyes; and when you come up to talk to me, you’ll only see the flicker of the small candle in front of me in the reflection of my glasses. You’ll ask me a question, and before I answer, I’ll pause and reach for a sip of their old fashioned with apple brandy. I’ll pause again, and right before answering, take a fake phone call and walk away.

It’s beer and wine, so no cocktails here. But you can feel so trendy and 2016 sipping on their selection of craft beers and natural wines. Plus, the dark and moody atmosphere helps you feel like it's not 80 degrees outside, and more like a place winter and the holidays might actually take place.

I don’t go to Studio City, often or ever, due to the crushing depression of being around so many out of work actors, but when I do, I go to Fiscal Agent. Man, I love how all secret agents have meetings in fairly abandoned bars. I remember going to a bar that wasn’t Fiscal Agent one time, and it was pretty abandoned. It was basically the only thing open in Silverlake at the moment, and there was this girl there. She was SO WEIRD. I mean, a super creep. We both agreed the music was kind of cool though. So go to Fiscal Agent instead, and have a That’s My Jam. Note: cocktail is wild, seasonal figs are very present.

Bars Restaurants
Part of the series: