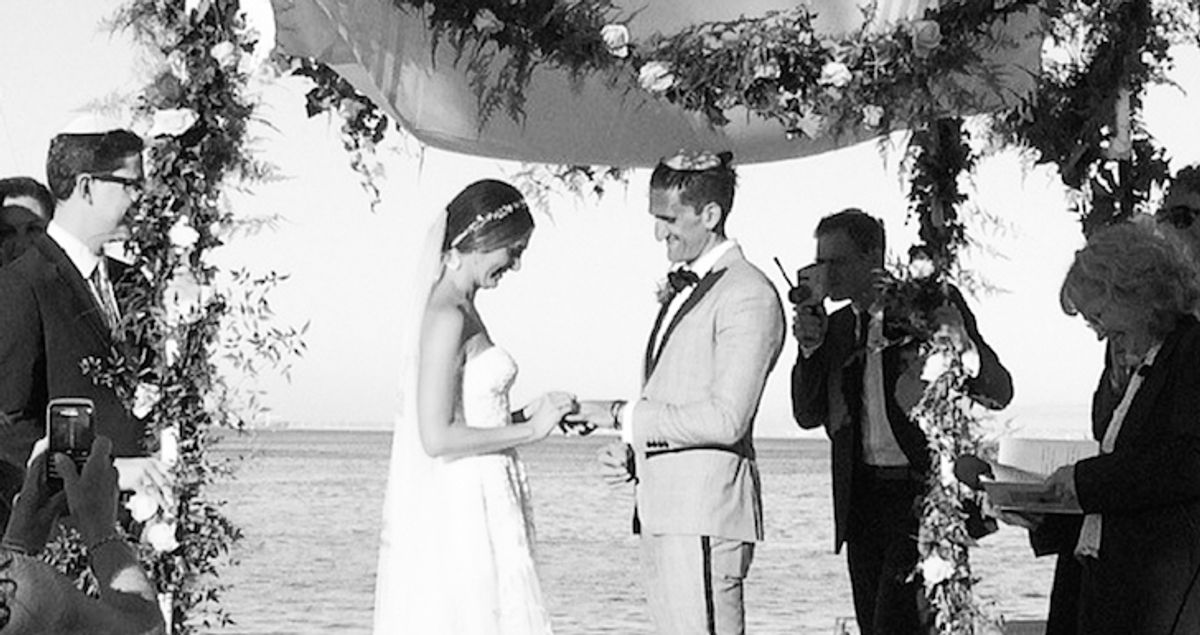 Your favorite filmmaker (and Snapchat-er) tells us about the ring, the tux & then some.

We're going to skip right over the usual dad joke-y platitudes concerning the groom's role in a wedding (meaning you can check your "my opinions are my wife's, and she says I'm lucky to have them" and the like at the door). It's our official(ish) 'wedding week', and we wanted to consult the opinion of a man who's been there, done that, signed the wedding certificate (ditto the opinion of someone marrying the same sex love of her life—we have more LGBT wedding coverage coming soon, too).

The man who instantly came to mind? Casey Neistat, filmmaker—he of YouTube, HBO and Snapchat fame, thousands of air miles and the stunning Vogue-lensed Cape Town wedding to his longtime partner, designer Candice Pool of Finn Jewelry. Based on our correspondence with him, we had the sneaking suspicion that Neistat wasn't the type to limit his involvement in his nuptials—and wouldn't you know it, we were right. Here's what he had to say by e-mail about the ring, the proposal and the bachelor party (or lack thereof).

On popping the question (and the ring):

"The proposal happened in Holland. We were there on a trip I got her for her birthday. There was a ring! Candice is a jeweler, so I couldn't fuck around when it came to the ring. My friend Waris Ahluwalia helped me source the stone. I gave him one parameter: when we get a divorce and she goes to get it assessed, it has to be a perfect stone—she'll appreciate that and reconsider."

On why he insisted on Cape Town:

"The girl is from SA, born in Cape Town. I didn't really fall in love with her until I went to SA with her 10 years ago—she's a different person there, the real version of herself."

"I had a auto-generated email reply to Candice. No matter the question, the response was the same: 'That sounds great! Excellent decision, Honey.' It was all her domain. I requested a helicopter, lions and fireworks. I got none of those asks."

On the bachelor party (or lack thereof):

"I am not a fan of strippers or drugs so I avoided a bachelor party. I did rent the house next to Candice's parents' house in Cape Town, filled it with all my friends and that's where we'd spend our nights. There was no shortage of fun being had."

On his tux (and her dress):

"I knew she'd have a white dress on. She looked beautiful, her most beautiful ever, but let's face it: ALL WEDDING DRESSES LOOK THE SAME. I had a custom tuxedo made. My outfit was more expensive than hers. That was a detail I was reminded of constantly."

On sparing no expenses:

"Around midnight Candice asked if we'd reached our minimum bar tab—when they said no she ordered five magnums of Dom Perignon. That did it."

On how they spent the honeymoon (no matter how "silly"):

"We went on this silly boat around South East Asia and got pregnant. It was pretty rad. Honestly, the idea of taking a honeymoon after spending a month in South Africa is pretty silly altogether. I'm glad we did it."