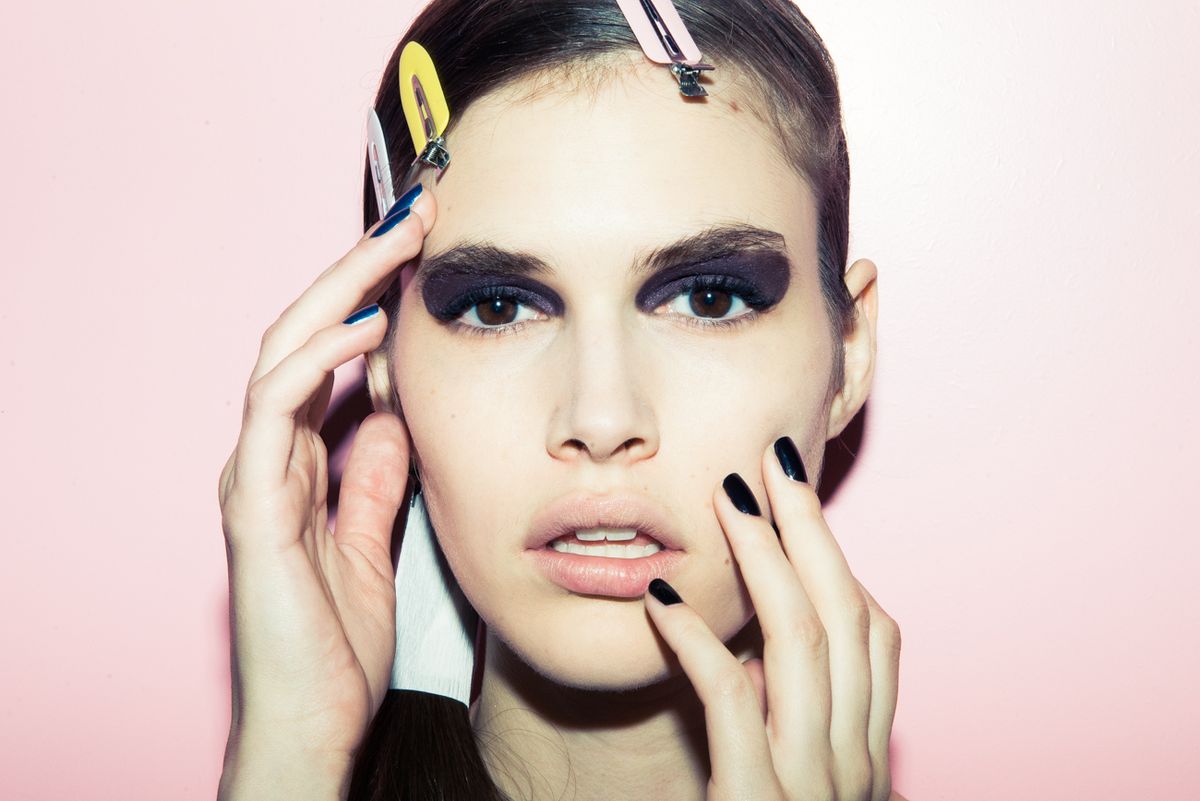 Noah Lehava
We know, we know. We’ve been preaching the whole bare-faced-and-bedhead look for a while now. But when Raf Simon’s psychedelic Dior parade trotted down the blush pink runway on Friday, we tripped. We mean, just look here. It was the above-the-neck ensemble — dramatic sweeping side-parted ponies, so sleek and shiny we could hardly look at them; the mani, dark and moody mismatched tips; the face, prim, clean and fresh, a cool contrast to the decidedly un-subtle glossy, graphic eye — that kicked in our eye shadow withdrawal. So naturally, we went to the source, Dior’s master face painter and Creative and Image Director, Peter Phillips, to see if we could pull it off IRL.

"I chose to blend Diorskin Star fluid foundation into the skin for perfect cover that still gave a natural result. Then, to hide little imperfections around the eye area I applied the new Fix It 2-in-1 Prime & Concealer using my fingers. And finally, to add a touch of light, I applied a veil of Diorskin Nude Cosmopolite, the new highlighter."

"Eyeshadow was applied in a dense block across the upper eyelid in a choice of kaki or plum shades from the Palette 5 Couleurs Cosmopolite Exubérante, or, in bronze and brown from the Palette 5 Couleurs Cosmopolite Eclectic. The large half-moon shaped design was done with a pre-dampened sponge applicator for maximum coverage. Next, using the Dior Pro Liner pen, black eye liner was applied to the lash line, and lastly the upper lashes were curled and coated with two coats of Diorshow Maximizer Lash Plumping Serum then I added 3 coats of Diorshow Pro Black mascara for a "false-lash" effect."

¨I wanted to instantly draw attention to the eyes by creating a very strong graphic look. It's a very controlled, very catwalk look. This very dense and polished look contrasts with a soft, luminous complexion. It's a combination of a rather feminine subtlety, and clear, distinct lines. This association reflects the spirit of the collection, which lies between the expression of fluid femininity and an accentuated graphic statement."

"I also used the Fix It 2-in-1 Prime & Concealer stick here as it gives both coverage and moisture. It neutralizes lip colour for a natural, blended look."

"Nail lacquers were mixed up with each hand displaying a different shade. Multiple colour combinations ranged from the deep black of Black Out to the metallic blue of Darling Blue, the grey green of Metropolis, the milky rosewood of Cosmopolite and the intense Bordeaux of the legendary Nuit 1947."