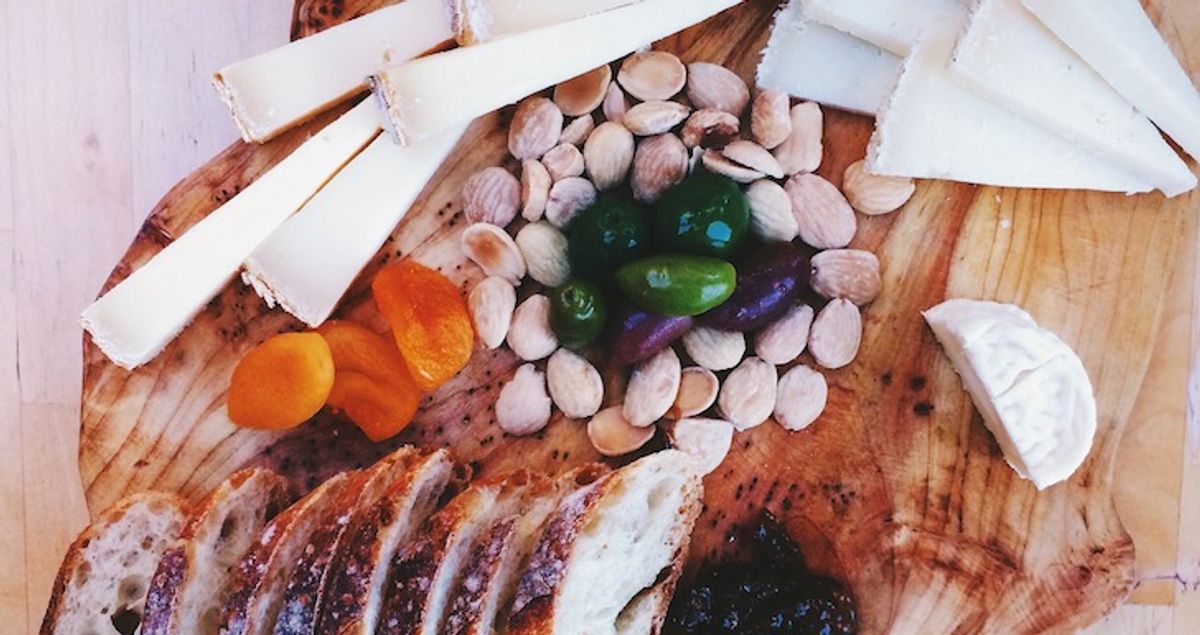 3 great date ideas in the City of Angles.

Katie Boyle
Our friend Remington Guest (of the lip-smacking Tumblr, The Cheap, The Best & The Hidden) knows good food and where to find it. (He's done it once for us before when he put together the list of New York and L.A.'s top vegan and veggie spots.) That and the fact that he's more than a little, ahem, cute, might just make him the perfect date. So we asked him to pool his resources and come up with three ideal dates nights on each coast. We'll pass it off to him to break it down in his own oh-so-special way and leave you with one tip: leave this open on your boyfriend's browser. You're welcome.

tip: Go for some jazz and order a cheese plate to take out to the patio.

Start out casual as shit. Have her meet you at Urban Radish. You can be like "eyyyyyy meet me at the grocery store in dtla :eggplant::tangerine::corn:"
NO PINEAPPLE EMOJI THO. That shit is basic and inappropriate. She’ll show up and you’ll casually be sipping wine from Radish's shop, and have this dope cheese board laid out, while looking turbo laissez faire in your most Gucci cardigan. Literally Gucci if you got it like that, but NO LOAFERS YOU CREEP. The Radish has live jazz certain nights so you can Google that shit. From there go see a movie. $7 Tuesdays are the move. Women like savvy guys—NOT CHEAP, savvy. Let them know about that $7 steal so they can start imagining a life where you go to Costco on weekends and buy office supply levels of toilet paper and diapers for the baby you probably didn’t realize you were going to have in 3-5 years, BUT NO LATER THAN 31 YEARS OLD. Now head back over to the uber chic Bar Mateo. It’s in the back of Zinc and is a super vibey hidden spot.

tip: Go for some jazz and order a cheese plate to take out to the patio.

tip: Pretty much a speakeasy, but less annoying.

Not All Shipwrecks End in Treats

tip: Sample everything. They encourage you literally try everything. I have no advice for you here. Prepare for a life changing experience.

Silverlake. We’re out here. We in it. The cool of the cool. Start out at Bar Stella. The downstairs part. It’s one of my favorite bars is L.A. Have a drink or two to prepare yourself for SPELLBOUND SKY where you’ll partake in a nice meditation sesh (Wednesdays only). Don’t panic fam: it's pretty easy and actually pretty amazing. If you’re still panicking it’s cool—it’s a guided meditation in which everyone's eyes are closed the whole time. A.k.a. the only judgement-free zone in L.A. I’ve got a feeling you’re lost as shit rn. Harness that amethyst fam god. FAITH WILL GUIDE YOU:pray:.

Otherwise, this is the most next level crystal shop—NEVER DOUBT MY KNOWLEDGE, I’VE BEEN TO ALL OF THEM, where you can get some citrine to destroy your obstacles and make monayyyy. Afterwards, head over to Nite + Market Song. But LEAVE YOUR CAR. YOU WILL NOT FIND PARKING and there’s no valet. UBEZIES. Go have some of the best Thai in LA and order the off-menu fried chicken sandwich. Lastly, you’re going to head over to the Normandie Club. This shit just opened, which is always good for impressing because you’ll seem like you might actually be in the know. The perfect ending to this date is to go super classic and get some ice cream. But not just any ice cream: Salt & Straw. It’s the some of best ice cream you will ever have, so even if your date was a complete and utter shipwreck you STILL got some dope treats.

tip: Go early. Like I said, it gets packed later in the night.

tip: Stay after mediation and talk to the owners. Their crystal knowledge is wild and their outlook on life is even better.

tip: Meditation is Wednesdays only, but call ahead to confirm. Also get there early, it actually fills up.

tip: The owners Mark and Martin are super next level. Seriously: talk to them about something.

tip: The haters will say Jitlada is the best Thai, so don’t think home boy doesn’t know about that ish. Night Market is where it’s at.

tip: Chill. Go now before everyone finds out and infiltrate.

tip: Sample everything. They encourage you to literally try everything. I have no advice for you here. Prepare for a life-changing experience.

Blowing Everyone Away with Extreme Subtly

Alfred Coffee {In The Alley}

tip: cold brew is on tap which is cool.

Start at the new Alfred's across from the most out of control Restoration Hardware you’ve ever seen. It’s not part of the date, but I wouldn't blame you if you wound up at said Restoration Hardware chilling on the ROOFTOP GARDEN. You can suggest a Cool Célfie™ for her to take under the Alfred’s neon sign. She’ll immediately think to herself “he gets me” and promptly begin planning your wedding, while you’re planning how you're going to install that $8,000 iron chandelier from Restoration in your apartment with zero handy skills.

Walk over to Melrose Place and ask if she’s ever been to Violet Grey. I’m a guy. I don’t care about makeup at all. But I GO into Violet Grey because it’s so next level I just want a part of that life. Then hit APC and cop the most subtle and plain sweatshirt so you can subtly stunt on the plebeians around you. Now get a cocktail at Redbird. Wear your trendiest shit—I’m a sneaker guy, but wouldn't be mad at some Chelsea boots and maybe that freshly copped sweatshirt. YEEZY SEASON. It’s a trendy place that will trendily evaluate what you're wearing before they trendily stall as long as possible before seating you. It’s worth it as the space is beautiful.

Now that you’re date is wondering when she might get some fucking dinner, a.k.a. the reason she’s on this date at all, you take her to Ramen Champ. NOTHING IS MORE WINTERY THAN SOUP. It’s in a shopping plaza in Chinatown, which is perfect. The more sus a date can be the better. SUS=AUTHENTIC bc #NewParis. After Ramen Champ drive up to Mulholland and check out the Hollywood Bowl lookout. Late at night on the weekdays there will most likely be no one there. It looks like the intro to the Hills and you can really get inspired to do something great with this view. Maybe like waking up and going to work tomorrow. I don’t know do you. Gonna let you live.

Alfred Coffee {In The Alley}

tip: Cold brew is on tap which is cool.

tip: The staff is knowledgeable.

tip: Check out the back room where you can get your makeup done. Some cool stuff in there.

tip: From the Eggslut Guys.

tip: Be ready because you place your order outside. This might feel weird to you but it’s FUCKING EVERYTHING. It’s like thinking about what you’re going to wear while you’re in the shower and when you get out everything is already laid out, and STEAMED. NO WRINKLES FOR MILES.

tip: It’s closed at night so you’ll have to park on the dirt curb and step over a tiny fence. Very worth it.