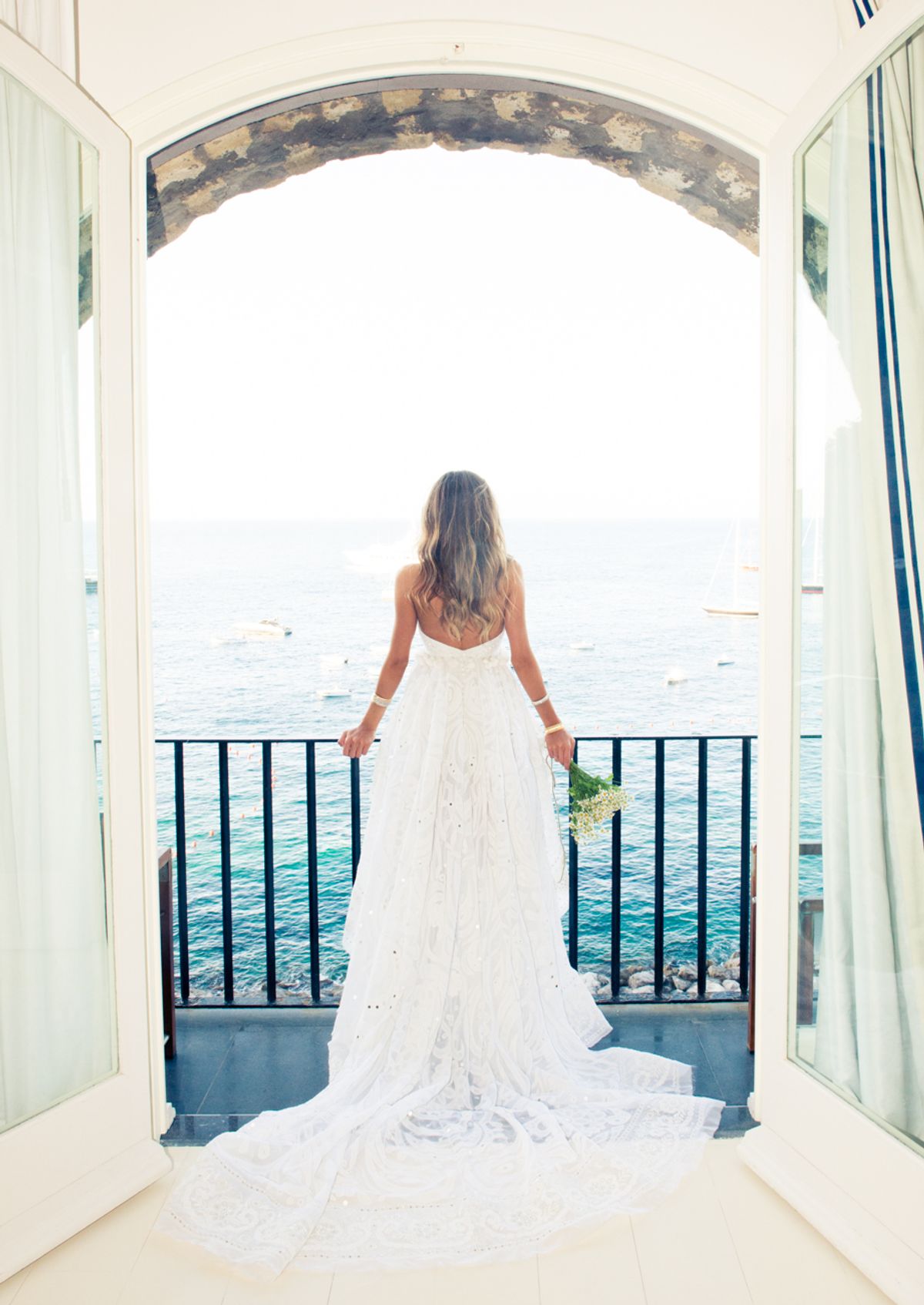 A wedding weekend with a front row-worthy guestlist. Capri

Katie Boyle
The Coveteurs you just couldn't get enough of, we're counting down the biggest and most exciting people we profiled this year, as voted by your clicks (yeah, you did!). Think of them as the honors class of Cov alums—instead of grades they have rare CHANEL and instead of extra-curriculars they have an excessive coffee table book collection.
We have a confession to make (please put down the Pinterest-fueled pitchforks). And yes, it has to do with us being, well, less than inspired when it comes to nuptials. To put it lightly, we couldn't be further from the wedding-obsessed types. In fact, we recently collectively struggled to name a single bridal magazine (or a notable wedding that we didn't see on Vogue.com). To really break it down, lets put it this way: beyond the requisite couture, the Royal Wedding (Middleton, Kardashian or otherwise) barely registered on our event-watching radar.

But when, late on a Friday afternoon, an email lands in your inbox detailing the finer points of a wedding weekend so extravagant it’s set to include a gorgeous getaway in Capri on the same weekend as the Dolce & Gabbana Alta Moda show and a guest list that more closely resembles front row guest list than a bridal party, well, it's not exactly the time to wax poetic on the merits of a happily-ever-unmarried-after union. Rather, it's the time to frantically book the next flight to Italy. As it turns out, on occasion, all it requires is a few key elements for us to suddenly perk up and start singing 'here comes the bride'. And the mention of a fleet of custom Mary Katrantzou frocks for before and Pucci by Peter Dundas gowns during the ceremony might have more to do with it than we'd typically care to admit. Leave it to Cov-alum Erica Pelosini (she of the racks on racks of Balmain jackets) and her then-fiancé Louis Leeman to pique our interest, right? Fast forward two flights, two trains, one cab ride and two ferry rides (phew!) direct from Ibiza later to our arrival to JK Place in Capri. Let’s just say that if this is what wedding locales have the potential to look like, than we’ve already joined the league plotting theirs out via Pinterest, actual to-be partner in marital bliss or not. Shortly after settling in, we joined the guest procession slowly spilling out onto the hotel's terrace, overlooking the beach and harbor below, reuniting with Cov-alums like Brian Atwood, Mary Katrantzou and Cameron Silver before heading down a winding cobblestone road for dinner at the famous Da Paolino. With the restaurant's famed lemon trees dangling just overhead, and the entire wedding party gathered beneath at a lengthy communal table (the groom-to-be explained his affinity for family-style dining over isolating guests via separate tables—sweet, right?), we ate, drank (and drank... when in, er, Capri, right?) and were merry, to put it lightly. And while we solemnly swear we had every intention of turning in early before the big day, when a crew like this asks you to head out dancing at the Amena e Core into the wee hours, you don't exactly say no.
Buy Now
Buy Now
Buy Now
Buy Now
Buy Now
Buy Now
Buy Now
Buy Now
Sliding into our new espadrilles the next morning (the entire group of guests were gifted pairs of striped Louis Leeman slip-ons with the wedding date embossed into the sole upon arrival), while we felt the need for copious espresso and a facefull of carbs to even come close to functioning the following morning, the bride-to-be's state couldn't have been more to the contrary. Pelosini greeted us looking rightfully radiant in custom Katrantzou alongside her handful of bridesmaids for a poolside brunch with the designer herself (a close friend, of course). After getting our recommended daily intake of girl talk (again, surprisingly devoid of pre-wedding jitters), it was time to get down to business—by which we mean get ready—and finally get a peek at the Peter Dundas masterpiece we'd heard so much about.
Buy Now
Buy Now
Buy Now
Buy Now
Back in the couple's massive suite, we popped champagne with Pelosini and her bridal party as they sat in hair and make-up and bonded with Mr. Pelosini (that would be Erica's dad, duh). Fake lashes on and just-ironed 'woke-up-like-this' waves intact, a team of seamstresses made their way through the room, sewing each and every bridesmaid into their sea blue Pucci before arriving at Pelosini with her one-of-a-kind, custom Peter Dundas creation. Ever the master of over packing, Pelosini finally settled on a pair of lace-up (and again, custom, because when you have a good thing going...) Aquazzura sandals before we headed off to the ceremony. (To illustrate exactly how laidback Pelosini was about the entire afternoon—her planner assigned us the task of ensuring that the bride arrive at her final destination in a punctual fashion, rather than her preferred 'Erica time.')
After dashing through the cobblestone streets, with Erica atop of a pint-sized construction truck, we arrived at the ceremony at the Certosa di San Giacomo (the grounds of which the couple had had planted with gardens lush with daisies). With a piano rendition of a favorite Rolling Stones song playing as Erica walked down the aisle, the couple said their vows under a canopy of sweeping trees as the guests watched from lengthy benches, letting go a fleet of white balloons that had been tied to their chairs as they took their walk back up the aisle as a married couple. We mean, if that doesn't have you going through dog-earing back issues of Martha Stewart Weddings what will, right? In a repeat of the previous night, we stayed up dancing and drinking and showing off the piano skills we never knew we had ‘til dawn. But you know what they say... some things that happen in Capri, stay in Capri—along with any photographic evidence.
Buy Now
Buy Now
Buy Now
Buy Now
Waking up the next morning, thankful for a slightly later start and a full lunch of carbs, Italian cheeses and hair of the dog in the form of early afternoon wine (guys, we swear we were Italian in another life) to look forward to, we headed off for lunch at il Riccio Beach Club. After more or less inhaling what might have been the most delicious seafood risotto we have ever had (and will ever have), it was out for a boat tour (with Daniele Cavalli and Magdalena Frackowiack in tow) around the harbor before saying our final goodbyes. Ciao, Capri!
Buy Now
Buy Now
Buy Now
Buy Now
More From the series Fashion