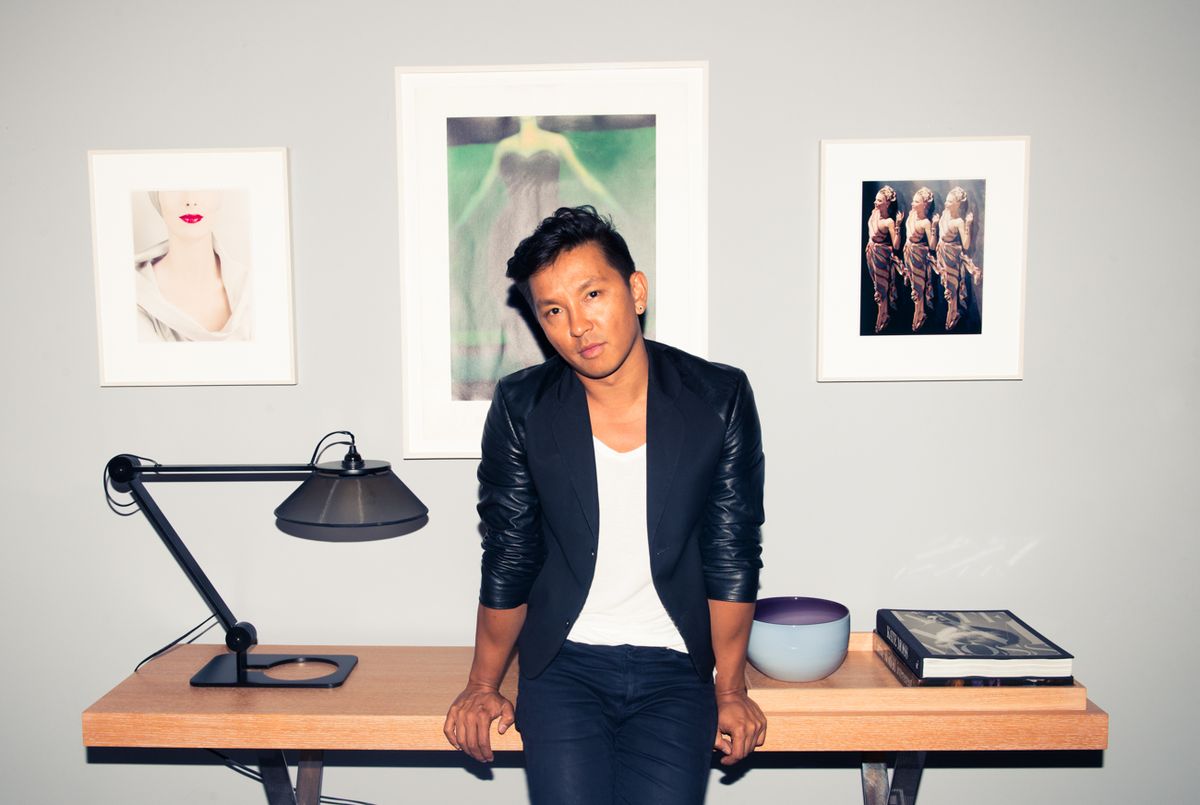 The designer on his enviable hair, the actress that moved him to tears and starting his own label.

Prabal Gurung’s clothes are consistently everything we kind of love about fashion (and you know that’s a serious love affair, guys) all rolled into one: the art-y influences, the globally-inflected prints, the hyper modern cuts and fabrics (he was doing cut-outs long before Urban Outfitters hopped on that train). We mean, while his shows are always one of our favorite stops of New York Fashion Week, for those who are actually lucky enough to own his clothes, a dress by Gurung is like wearing a full-on walking street style moment without having to think about it. For one thing it makes it that much easier for us occasionally lackadaisical dressers—one piece and you’re good to go—but we can also appreciate the straight up skill Gurung possesses to pull pieces like that together. Have you seen those patchworked red wrap dresses that closed his fall 2014 runway show? The term breathtaking is one that comes to mind.

You can likely imagine that we were more than a little excited to sit down with the designer during a recent visit over at The Room at Hudson’s Bay in our hometown—let's just say it was a reunion of sorts. And seeing as we’d like to consider ourselves besties (um, kind of), when we met up this time around, we decided to get Gurung going on the serious discussion of starting his own label and maintaining balance in the face of crazy success (we mean, streakers don’t show up at just anyone’s runway show, you guys). And even more seriously (as far as we’re concerned), we asked him the secret to those lustrous locks. While it turns out it’s mostly natural (we know, so lucky), we still promise to do our best to imitate.

On the Prabal Gurung woman…

On starting his own label…

“When I launched in fall 2009, I had left [my position as] design director at Bill Blass. We were deep in recession and [I was] unemployed. My company is all self-funded—there is no investor. I moved from my apartment into this tiny little studio in the East Village and I literally had less than $10,000 to start.

Buy Now
Buy Now
Buy Now
Buy Now
“I made a small collection. The fabrics were borrowed from the Bill Blass studio, and the seamstress from [Blass] did it for free, and the space that I got was from an old client of Bill Blass—she and her husband had this art gallery space—so they gave it to me for free. Makeup artists and everyone came for free. My group of friends—there were eight of us—did all the behind the scenes production, casting, everything. Literally everyone came on for free. The first person to come was [former New York Times critic] Eric Wilson. I brought him into my East Village studio to look at [the collection] and he said to me, ‘Please don’t bring anyone else in here.’ It was a nasty little studio. That’s how it started.
“I did a two-hour presentation at the FLAG Art Foundation and the first hour it was all assistant editors or assistant buyers who were my friends. They started texting their bosses and that’s when Bridget Foley, Cathy Horyn and everyone came. A day later I woke up and opened the pages of WWD and there was my first collection on the cover. That kind of shifted the whole thing for me. You have to understand that there are usually seven days allocated for suspense and it’s Ralph Lauren, Donna [Karan on the cover], so to have this new designer that kind of took off.
“A bunch of celebrities started to wear [my clothes], like Demi [Moore] and Zoe [Saldana]. Zoe had just left New York to do Avatar and Star Trek. I’ve known her for more than 12 years, so for her big premier for Star Trek she wore my design. [Back then,] my studio was the workspace and everyone worked from there. It was only a team of three and the interns. The first time I applied for the CFDA Incubator, it was the only way we can afford to [continue]. So we applied for it and the same year they asked me to apply for the CFDA/Vogue Fashion Fund and I won runner-up and the same year I won the CFDA Swarovski Award. It was a great year and that money allowed me to do a resort collection and pre-fall. I went from a 300 square foot studio in the East Village, to an 800 square foot space in the Incubator and now I have 5000 square feet, so it’s growing. And we’ve just finished our fifth year now.”
Buy Now
Buy Now
Buy Now
Buy Now

“Home. Nepal. It’s really amazing. My foundation is there—I started a foundation to educate girls there. We started with like 12 girls and now it’s on to 60. [I started it after] my third collection, which was on the cover of Fashion Week Daily. My picture was there and it read, ‘A star is born.’ I was really grateful, but slightly agitated by it and really nervous. I called my brother and told him all this attention was coming my way and that I was afraid that it would go to my head. If people tell you all this great stuff, you start believing it. I’ve seen it happen to other designers. I don’t want that to happen to me, so I started a foundation—I have this platform, I have this audience now. The goal is to really educate these displaced girls and kids. It’s one of the most fulfilling things. Of course, I love what I do—I’ve always wanted to do this—but this is like a grounding factor for me. When your life is a twice-a-year runway show, ad campaigns, the Met Gala—all these fabulous things—you lose touch with reality. You constantly meet people, where your conversation is dealing with fabulousness and you lose touch, which was always one of my biggest worries for myself.”

“Yes, exactly, but it’s all good. When you work hard and live in a city like New York, you want it to be efficient, you want to work hard and there is nothing wrong with that. What I feel is that it’s good to have a clear balance with something else—a better perspective.”

On his envy-inducing coif…

“My hair, I mean, I wash it. I would say I’m blessed with relatively good hair. When you know all of these hair stylists they give you all these products—I never buy it—a balm. It’s a little bit of a wash, tease and go.

On his collecting habit…

“I collect a few, very few, pieces of art. A lot of it has been exchanged actually. This artist Casey Cook, I did her wedding gown, and she gave me this beautiful piece, which is in the showroom. And I collect editions of Romeo and Juliet. I actually haven’t really told anyone [that because] it makes me seem a little sappy, but I love it. I’ve always loved the story, so I have different versions of it and I always try to go and see it. I saw Meryl Streep and Kevin Kline perform it at Shakespeare at the Park. Watching someone perform, I’ve never felt like that. It was just a reading—she was reading and I started crying. It was amazing.”