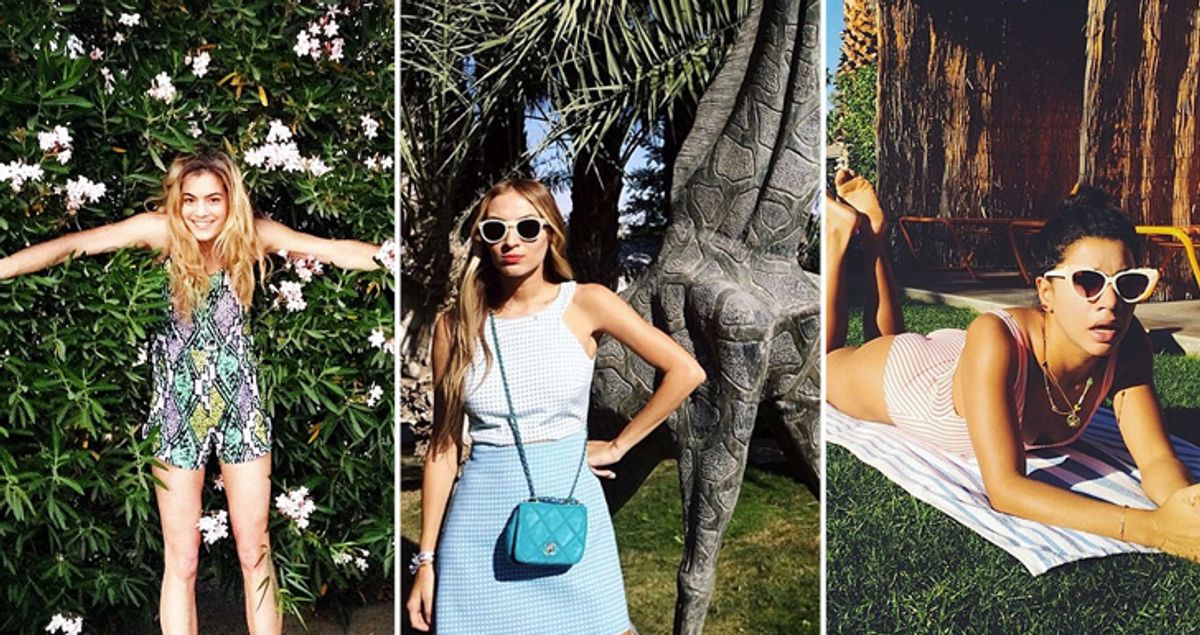 Our favorite festival goers on what to wear, see, do and bring.

Collectively, we’ve been to enough ‘Ellas, and ‘Oozas to know our way around a music festival (just kidding, we get lost every single time). But we do have some friends who’ve packed enough bucket bags and planned enough dust-storm chic outfits to offer up a few pearls of festival wisdom—Hannah Bronfman, Harley Viera Newton and Chelsea Leyland, to name a few.

But first, a few of our own dos and don’ts from our (mostly unfortunate) personal experience…

If you don’t have a ticket, under no circumstances should you attempt to hop over a fence and sneak into a festival—you could break your big toe and have to spend the rest of the day restricting your Disclosure dancing to the waist up. Another safety tip: there is no better way to make fast frenemies than to crawl through people’s legs to get to the front of the crowd. Best-case scenario: Losing your friends and having muddy footprints imprinted in your crochet frock. Worst-case scenario: Catalyzing stampede.

If you intend to solicit shoulder rides from that tall dark and handsome stranger over there, for the love of Britney, wear a skort. Oh, and last but not least, do follow this handy general rule—the number of inches your crop top descends below your bra line should roughly equal the number of beers you intend to consume (imagine a graph from Sporty Spice to Sister Wife and place yourself somewhere in the middle). If you’re tempted to break this rule, calmly remind yourself that you are not Gwen Stefani and probably want to eat a taco today.

In the name of Governors Ball this weekend (and the myriad other festivals yet to play out this summer), here’s what some of our favorite festival-circuit regulars had to say on what to wear, who to see, what to bring and where to go this summer. Are you taking notes?

“I've seen several amazing shows at past Coachellas... Blur and Pulp were highlights.”

“The Strokes at Governors Ball!”

What’s on your summer playlist?

“The latest albums from Blood Orange and HAIM. I’m also currently working on the second chapter of my summer mixtape with DJ Ross One, “Homefriends #2.”

“I love the rose water spray from the Heritage Store because it is great to cool you down and make you feel refreshed when you don’t have time for a shower. It is also perfect to tone your skin—and the smell is amazing. I always carry around organic facial wipes. These are perfect for cleaning your skin, and keeping you feeling fresh throughout the day. I particularly like the brand Neal’s Yard because they are purely organic and rejuvenate your skin as well as clean it. The marijuana socks by HUFF are a necessity when I’m at a festival. I usually find myself wearing boots, and I have to wear socks to protect my feet. Dragon Girl red lip pencil by NARS is also a must—I manage to carry it around everywhere I go. I always bring along 37 Extreme Active by Dr. Macrene. It truly is the best moisturizer I’ve ever come across, and completely refreshes my skin when it feels dehydrated and unhealthy. [And lastly,] mints by Fisherman Friends because you never know when you are going to need them!”

The Rolling Stones at Glastonbury, 2013”

“Another Love” by Tom Odell

“Trust In You” by Tourist

“You & Me featuring Eliza Doolittle (Flume remix)” by Disclosure

“I loved seeing Santigold at Lollapalooza five years ago! It was my first time going to that festival and she pulled me onstage to dance. I had so much fun!”

“I'm fully obsessed with Beyonce and I had the best time at her concert this year.”

“Coachella is a tradition for my friends and I. I am also hoping to get to Glastonbury ASAP!”

"No Rest for the Wicked (Belarbi Remix)" by Lykke Li

“Water, sunglasses, Advil, bandana and breath mints. So obvious and boring I know!”

“I think the world stood still when Beyonce showed up to sing and dance with Solange at Coachella this year—talk about mega soul sister star power.”

“That is like picking who my favorite child is (if I had kids). I love seeing fresh, super hungry new acts because they are so excited—and some of them will go on to perform in giant venues some day and you can say you knew them when. However, there really is nothing like seeing legends like Stevie Nicks, The Pretenders or New Order command the stage. You feel like you’re absorbing pure rock and roll history and you’ll be able to tell your grandkids some day that you saw this band!”

“I’m excited to see Jenny Lewis, Neko Case, Interpol, The Strokes and Phoenix which all coincidentally musically define my first few years of living in New York in the early 2000s. I really want to try to catch Fleetwood Mac and Billy Joel as well!”

“I’m dying to go to an English festival one day before I’m too old and tired. I like Governors Ball because it’s in my backyard, but Coachella has this love/hate mystique that draws me in every year. I think it’s the palm trees and endless people watching—I have gone with the same friends every year.”

“Friend & Lover” by Reach Out Of The Darkness

“Is This How You Feel” by The Preatures

“Pills and Potions” by Nikki Minaj

“Funky sunglasses. I also wear them at night to add a little something extra to my festival attire. Flower headwraps are a must! A Mophie battery to keep my phone charged beyond its usual capacity, a crossbody bag to hold all my belongings, and sunscreen to protect my skin during the day.”

“The best set I have ever seen at a festival was Martin Garrix at Coachella this year. He played a lot of my favorite songs and the crowd had so much energy… I was dancing the entire set! The performance took place at night, which I always prefer over day sets because I love the laser show that always comes with the music. Once the sun goes down, the light shows begin!

“One of my favorite live acts [of all time] is Carnage. He really knows how to get the crowd excited and pumped no matter the atmosphere, and his sets are always full of energy and bass. I think that if an artist can get the audience rowdy (in a good way), it really makes a difference for the set itself, and it also makes the experience really memorable because everyone cis dancing and having fun together, whether you are friends or strangers.”

Who are you most excited to see this summer?

“I am really looking forward to seeing Dimitri Vegas & Like Mike at TomorrowWorld. I have never seen them and always wanted to, because I love all of their tracks. I have also never been to TomorrowWorld itself, and I think this first time will be a festival I will never forget.”

“My favorite festival is Electric Daisy Carnival (EDC), because of its positive energy. Everyone is always so friendly and happy, and all the costumes people wear gives the whole event plenty of extra flair… not to mention all the carnival rides they have on-site! Best of all, I can always watch my favorite DJs perform at EDC in one sitting. My first festival ever was actually EDC New York 2012, and ever since then I was hooked on music fests as a whole!”

“Fly Away” by Who Killed Mickey & Zac Waters

“Up in This!” by Julian Jordan

“How You Love Me” by 3LAU, Bright Lights

Coachella
More From the series Fashion