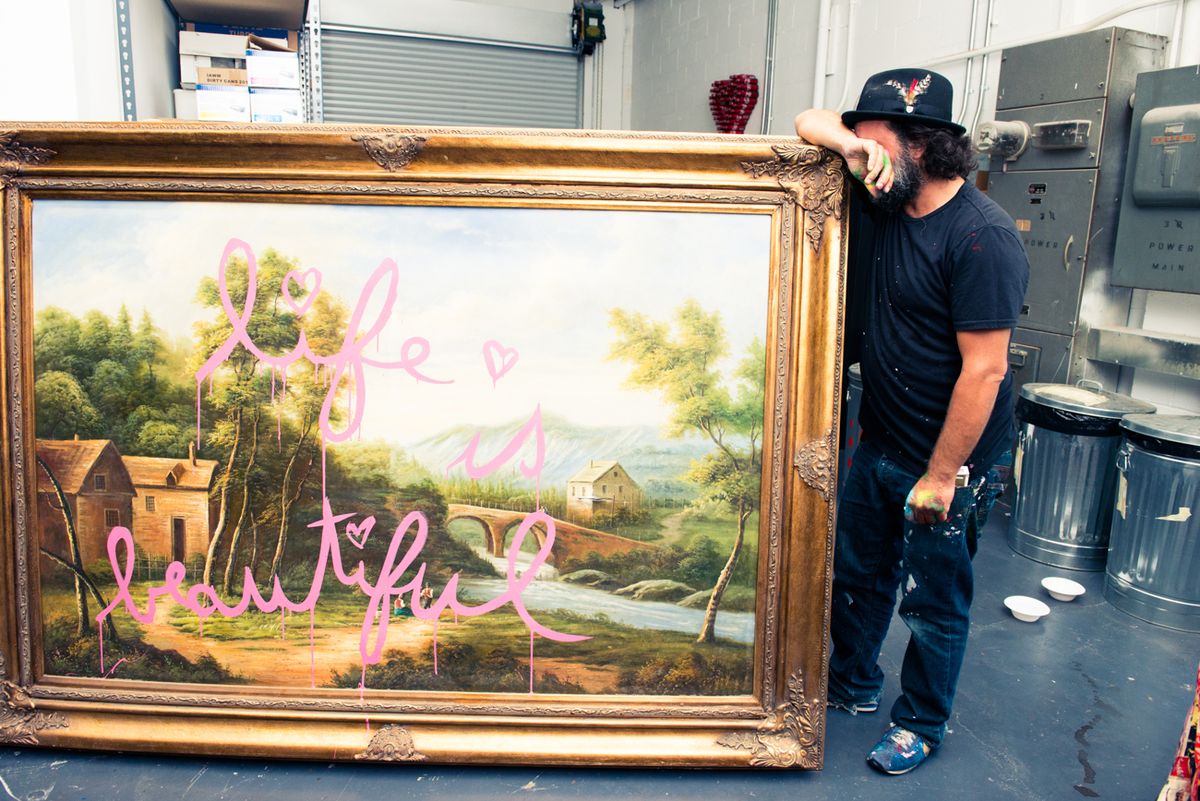 We feel pretty privileged to gain access into some of the most top secret places and spaces. After all, how many people will ever get to visit Coco Chanel's Parisian abode or Barbie HQ (a hybrid we can only describe as Willy Wonka And The Chocolate Factory meets the C.I.A.) in their lifetime? Good luck getting the golden key, guys. Getting a look inside the heads and environments of some of the most poignant people of our generation is just another day at the office for us, but also a kind of a "work perk" of sorts; especially when said person happens to be someone you're kinda a die-hard fan on. (Repeat after us: "Keep calm and don't have a fan-girl moment.")

We have virtually no doubt in our minds that you're more than familiar with the work of street artist, Thierry Guetta—after all, his graffiti'd portrait of Kate Moss that's graced many a Tumblr dashboard; though you likely know him best by his pseudonym, Mr. Brainwash - the is-he-or-isn't-he-effing-with-us subject of Banksy's Exit Through the Gift Shop film? Yes, that guy. Fact: The New York Times once likened him to that of "the art world's Borat" - think about that for a sec. Guetta's entire M.O. is centred around taking the Warholian tradition of juxtaposing elements of fine art with larger than life cultural icons and mass culture to the streets. Oh, and did we mention that he's been commissioned to create album art for Madonna?

We arrived bright and early at Guetta's super-secret studio one sunny Los Angeles morning, though we admittedly had a little trouble finding the place. His space is almost entirely unsuspecting and anonymous to outsiders looking in; it doesn't betray even the slightest hint of its colorful contents. We were entirely unsure of what to expect, but nothing could have prepared us for what we'd find inside: massive piles of art supplies, ripped canvases, giant metallic installations, crowded, over-flowing shelves of reference books and references to Guetta's maxim, 'Life is Beautiful' everywhere you turned. Oh, and an oversized Mr. Potato Head. Guetta enthusiastically showed us around his space—after all, we all know he's an enthusiast when it comes to documenting the making of his work—and even introduced us to his son, a burgeoning street artist himself.

"I spray, you shoot," he directed us, in his heavy Parisian accent. Guetta grabbed a bottle on candy pink spray paint and began plastering "Life is Beautiful" on a beat up piece of recycled wood. From there, he channeled his inner Batman, jumping from cars (seriously, we can't make this stuff up) he had vandalized with his signature touch. After making a few calls, Guetta turned to us and motioned to the door. "Come, I want to show you something." We headed across the street to his fantasy factory of past projects filled with once-revered pieces, exhibition works in-the-making and inspirational resources. All starry-eyed and speechless, we ventured back to his magical studio and he handed us each a signed print and bottle of his signature Campbell's Soup spray cans as we, technically-speaking, Exited Through the Gift Shop.